Lambda Award finalist, Nathaniel Frank, was designated as the first expert witness for a historic Constitutional challenge to the military’s “Don’t Ask, Don’t Tell” policy. The federal trial, which is being brought by Log Cabin Republicans and tried pro-bono by White & Case LLP in Riverside, CA, began this week (July 14) with Frank’s testimony across two days. W&C’s lead attorney, Dan Woods, asked Frank to take the Court through a century of history about how gays have been treated in the military, to show that the current exclusionary policy was based on nothing more than prejudice and has failed to achieve any legitimate government purpose. (Read more about Log Cabin Republics vs US here.)

Frank’s testimony loosely followed the contours of his book on the policy, Unfriendly Fire: How the Gay Ban Undermines the Military and Weakens America, published by St. Martin’s Press in 2009 (reviewed here). 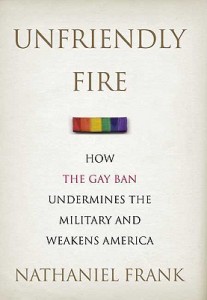 This has been a pivotal year for Frank. On June 1st, he became the senior strategist at the LGBT Movement Advancement Project (MAP). In his new position at MAP, Frank, who was for ten years the senior research fellow at the University of California’s Palm Center, will conduct high-level research on issues critical to the advancement of LGBT equality. He will help MAP analyze where value can be added in the movement, and work with partner organizations around the country to provide intellectual resources that expand the movement’s capacity and impact.

Frank’s compelling book is a primer on the history and impact of the DADT policy on our military. In Nathan Tipton’s review for LambdaLiterary.org, Tipton called the book, ” a devastating multi-frontal assault on the gay ban’s history and ideological underpinnings, amply illustrating the shaky ground upon which justifications for the gay ban were founded, promoted, and continually supported.”

Likewise, Frank received praise from Janet Maslin in the Times, blogger Andrew Sullivan of The Daily Dish, and Sean Kennedy in Advocate.com.

In the book, Frank documents how this policy came into being as a result of President Clinton’s early commitment to overturn the ban on gays and lesbians in the military. He details how this policy has negatively impacted the military, dispels the myths justifying the policy, and explains why this ill-advised policy should be struck down. His exceptionally researched, relevant book puts a human face on the issue and is particularly timely in light of President Obama’s commitment to revisit the policy. Read the first chapter of Unfriendly Fire here.

'The Ladder' Makes History Again
Read an Excerpt from Ann McMan's New Novel ’Backcast’
Listen to This! The HIV and Literature Radio Hour