As Gay Fate would have it, on two consecutive nights last week, I attended plays about men who have sex with men. I’d call them “gay plays” but since I have no idea whether either of them sleeps with musicals, how would I know?

At cursory glance, both would seem to be as dissimilar in plot and theme as they are distant in neighborhood and stature. But appearances—like men who have sex with men—can be deceiving. 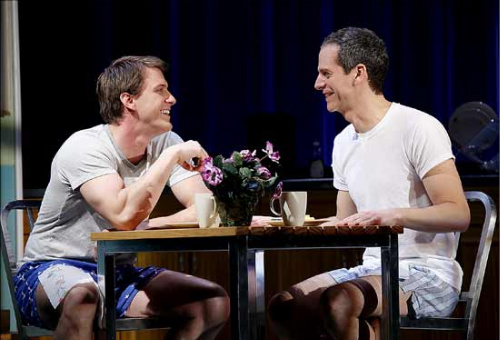 Patrick Breen (Adam) and Patrick Heusinger (Luke) in Next Fall by Geoffrey Nauffts and directed by Sheryl Kaller at the Helen Hayes Theatre (New York, NY).

On Tuesday night it was Next Fall at the Helen Hayes Theater. Produced by the most successful man-loving man in the world and starring an actor allegedly known for a recurring role in “Gossip Girl,” the play (written by Geoffrey Nauffts) has a few original although irritating ideas about the Son of God and the gay sons of those who believe devoutly in Him. That it takes place in a tense hospital waiting room with winking flashbacks to funnier times gives it the feel of a very special episode of “Will and Grace” (heavy on the grace).

On Wednesday night it was Pen Knife, performed in a Loisaida basement called The Living Theater. Produced by The Pretenders, the Caborca Theater, and what seemed like quite a bit of blood, sweat, and imagination, Pen Knife envisions the love-slash-hate affair between French poets Paul Verlaine and Arthur Rimbaud. Most rivetingly, the play gives voice to Verlaine’s put-upon wife, Mathilde.

Both plays revolve around what’s become “the Tony Kushner couple.” You know the stereotype: wise, kinky-haired nebbish and younger, more attractive blonde naif (in Rimbaud’s case, faux-naif). They’re a mismatched couple who resist their mutual desire, treat one another sadistically, and eventually (tragically, fatally) fall. And you sit through the whole thing wondering if it’s just a bad night or if whoever cast the play lacks the ability to create chemistry onstage.

In Next Fall, the wise nebbish is a failed writer-cum-teacher named Adam (Patrick Breen); his ingenue and sparring partner is a devout Christian cater-actor named Luke (Patrick Heusinger).

It should probably come as no surprise that the strongest performances come from neither of the spoiled, selfish queens coupled so oddly onstage. We’ve seen it all before. In fact, many of us see enough of it in the lives of our coupled friends. No, the real chops in these productions belong to those playing the collateral damage: a mother, a fag hag, a wife.

Next Fall would be a groaning disaster (held together by a weak thread of an argument for gay Christians) if not for Maddie Corman’s intervention as Holly, a wisecracking candle shop owner, and Connie Ray as Arlene, a pill-popping, born-again, off-again mom. Both actors take their stereotypical roles and elevate them to archetypes.

Likewise, Melinda Helfrich’s affecting portrayal of Mathilde Verlaine, who refers to herself in one gut-wrenching scene as “a spot at the bottom of a big pile of art.” If not for her, Pen Knife would merely be an evening of translated decadent poetry—and some wonderful asides by writer Christopher Richard—with a memorable all-white set: sunken, covered in reams of writing paper, a bed center stage, and hundreds of pens strung from the ceiling like miniature Damocles’ swords.

One would assume that the production with the deepest pockets, the righteous connections, and actors with the most “Law and Order” credits would be the most compelling night in the theater. But that assumption would be wrong. My point is that although neither play is deserving of a Tony, the one most worthy of an audience’s attentions will never be nominated for one. The best it could hope for, I suppose, is an Obie. Already closed, here’s hoping Pen Knife will get another stab. Perhaps next fall? 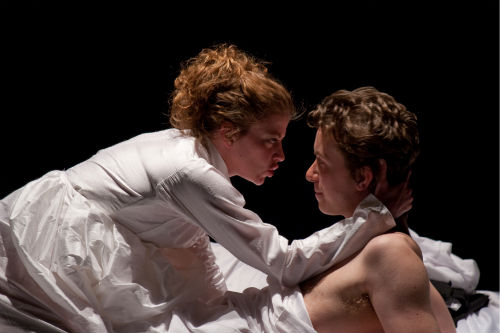 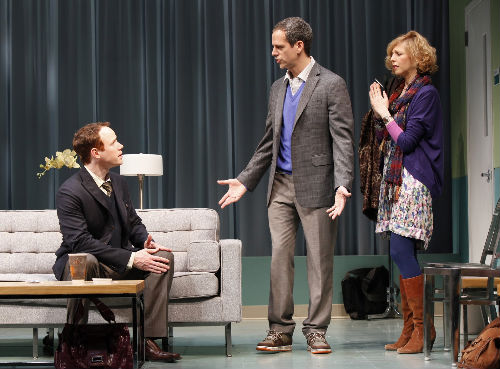 NEXT FALL
written by Geoffrey Nauffts
directed by Sheryl Kaller