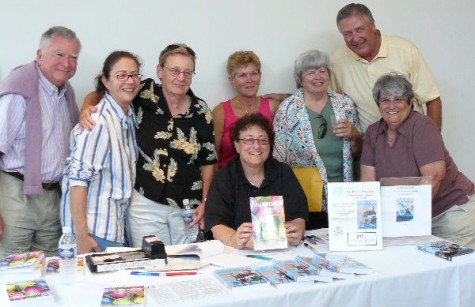 Not long before Anyda Marchant (known to lesbians of all ages as Sarah Aldridge) died in 2006, she told friend Fay Jacobs, “you know, you are the future of A & M Books,” Jacobs told a crowd of almost 50 at a recent book signing in Rehoboth Beach, Delaware.

Marchant and her partner Muriel Crawford had founded A & M books a decade earlier and the press had made new editions of Marchant’s body of work (14 novels) available, as well as Jacobs’ first book, As I Lay Frying.

“I know nothing from publishing,” argued Jacobs, a Rehoboth transplant from NY via Maryland where she was a journalist—a writer, not a publisher. Fortunately, says Jacobs, Marchant and Crawford—partners for almost 57 years who died in 2006 within months of each other—left Jacobs not only the press, but “the money to publish” Jacobs’ second book: Fried and True: Tales from Rehoboth Beach.

As much as Jacobs was thrilled to be able to publish her own second book, she wanted to “leave a legacy of Anyda and Muriel. We need to bring this whole new generation” into contact with Marchant/Aldridge’s work and their story, she told the crowded room.

“Anyda and Muriel had friends,” explained Jacobs. On their front porch on Laurel Street, every Saturday late afternoon, mostly women gathered for what can only be described as a “salon.” There was drinking, laughing, encouragement of new and young writers, and sharing. It quickly became an institution.

So as Jacobs and friends considered how to “leave a legacy” to their dear friends Anyda and Muriel, Stefani Deoul—one of the porch people—suggested: “Why don’t we publish an anniversary edition of The Latecomer (Aldridge’s first novel first published in 1974) and see what people thought when they read it back in the 70s.” The idea was to find out how women felt “finding themselves in literature.” What did it mean to see that lesbians could live happy and full lives? How did it feel to read the story of lesbians who weren’t serial killers, suicidal, or lonely recluses cheated out of fulfilling lives by men who’s only “credential” was their maleness. 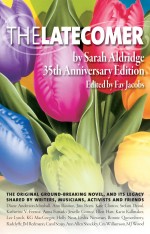 But how to publish this book? Where would the money come from? Jacobs turned “to the people on the porch. The response was amazing! The money would be there”, they just needed input from women throughout the lesbian community. There the response was amazing, too. In addition to the dozen or so contributions included in The Latecomer 35th Anniversary Edition, there has be such great response that another book will eventually include those contributions as well as the story of Anyda and Muriel’s amazing lives and relationship.

Says Jacobs, “I’m really excited that my friends Anyda and Muriel will be immortalized this way.”

Jacobs herself, is finding immortality in the printed work. Having finished reading her second book, Fried & True: Tales from Rehoboth Beach, I have to wonder, “could this self-professed computer illiterate have hacked into my brain and stolen all of my thoughts and experiences?” And between the two books—a dud can’t be found. I’ve been the writer of a weekly column and hit after hit is no easy task! But Jacobs hits the mark with every piece included in both books.

I guarantee that anyone who reads either book will definitely laugh out loud and say: “I thought we were/I was the only one/s….” to do, think of feel whatever Jacobs is recounting.

Marchant, always ahead of her time—with her career in law, her penning lesbian novels, even coming out of the closest at the “real” Sarah Aldridge–was, in the end, equally prophetic: it is doubtful anyone else could have/ or would have with such dedication and determination carried the A & M imprint into the future.