‘Equality: What Do You Think About When You Think of Equality?’ Edited by Paul Alan Fahey

‘Equality: What Do You Think About When You Think of Equality?’ Edited by Paul Alan Fahey 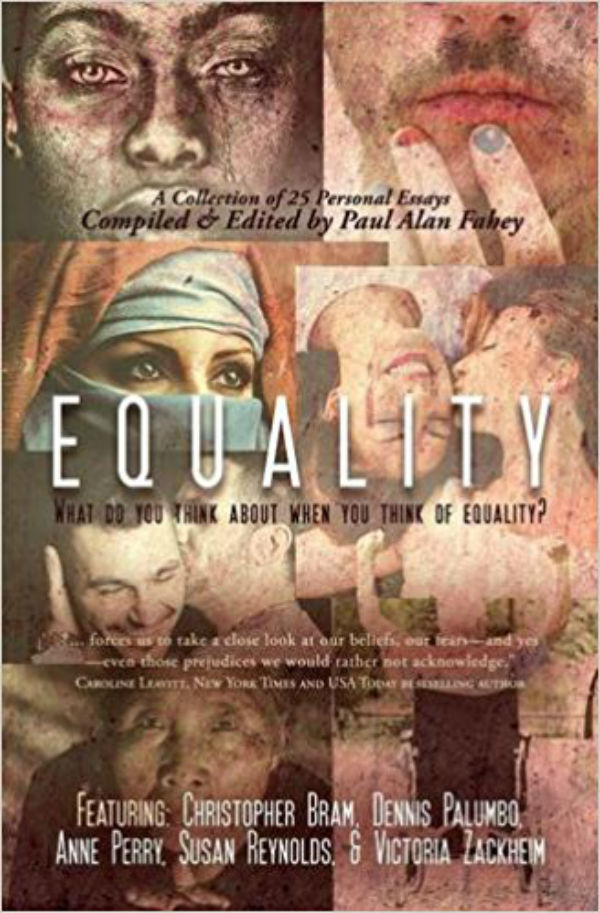 Is equality like obscenity?* You’ll know it when you see it?

Readers may get the same impression when reading Equality: What Do You Think About When You Think of Equality?. Compiled and edited by Paul Alan Fahey, this collection of 25 essays by assorted writers interrogates the meaning of equality. For some essayists, conclusions are based on a single experience, while others weave several personal events into a pattern; all are transformative readings.

In “Give Us Our Birthright,” on reviving the Equal Rights Amendment, Susan Reynolds underscores the importance of knowing social justice history, summarizing the ERA’s lineage from the 1848 Women’s Rights Conference with Elizabeth Cady Stanton to Alice Paul and Crystal Eastman, who penned the ERA and introduced it to Congress in 1923. Still alive in 1972 when the last iteration of an ERA measure was passed by Congress for states’ consideration, Alice Paul inspired the new era’s Women’s Movement–Gloria Steinem, Bella Abzug, New York Congresswoman Shirley Chisholm (I heard Chisholm deliver her 1972 Presidential campaign speech, the most inspiring speech I’ve ever heard). Chisholm was the first woman and the first African-American person to seek the Democratic Party’s presidential nomination.

In his remembrance of Lani Silver, writer David Congalton addresses the pace of social change. Silver told Congalton, “We’ve gone from Jasper to an African-American president…in a single decade,” referring to the hot June night in Jasper, Texas, in 1998, when James Byrd, Jr. was beaten and tied by his ankles to the back of a truck by three men offering him a ride. With his head severed after a 3.5 mile dragging, police found body parts in 84 different places along the road.

Like Nathan Manske’s brilliant LGBT-themed video project, I’m from Driftwood, Silver always spoke directly to those oppressed. Humbly, that’s good advice for us all to follow. She talked to 2,600 people in Jaspers, Houston, and San Francisco asking them: How has racism affected your life?

Listening to others rather than simply talking allows for understanding nuance and explaining history. Listening to himself is how Fahey concocted the idea for his book. “After Proposition 8 was declared unconstitutional, I realized I could marry Robert after being together 37 years. Now I know what equality means,” he thought at that moment. The contributors list is intersectional by design. “I made up my dream list of writers and they all came through,” Fahey writes.

In “Everyday Equality,” Barbara Jacksha offers a challenging thought: true equality demands no conformity and embraces all sexual preferences. Her essay walks readers through asking if she treats others the way she hopes to be treated. Jacksha’s piece dovetails nicely with Catherine Ryan Hyde’s essay, “When I Think of Equality,” in which Hyde pokes at us with her challenge to “[i]magine a world in which we all applied our beliefs to our own lives and left everybody else the hell alone.”

Searching his soul, the author  ‘Nathan Burgoine reflects that “[l]ife as a queer is halfway, and halfway, and halfway,” a conclusion he reached after discussing marriage with a long-time straight friend. His easygoing style reflects a lovable feature of Fahey’s collection: it’s not tight-as-a-frog’s-ass academic. Essayists aren’t defending their doctoral theses against arcane counterpoints. They’re simply remembering experiences. All in all, a refreshing political read for today’s modern reader.

*In the obscenity case of Jacobellis v. Ohio (1964), US Supreme Court Justice Potter Stewart wrote that “hard-core pornography” was hard to define, but “I know it when I see it.”

Equality: What Do You Think About When You Think of Equality?

'The Stonewall Riots: A Documentary History' by Marc Stein
'The End of the Homosexual?' by Dennis Altman
'Light' by 'Nathan Burgoine