‘Indomitable: The Life of Barbara Grier’ by Joanne Passet

‘Indomitable: The Life of Barbara Grier’ by Joanne Passet 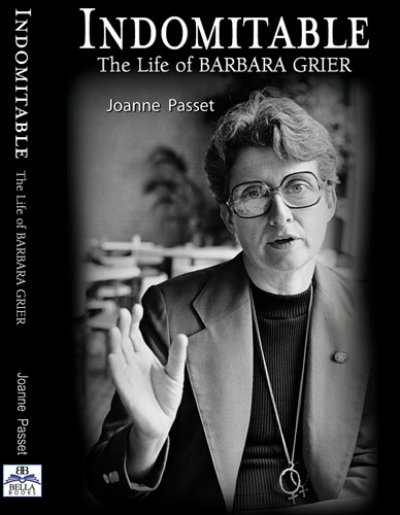 If Barbara Grier were alive today, she would be calling every bookseller with an active account to order at least one box of Indomitable. I can hear her on the telephone, This is Barbara Grier. I am calling about this new biography Indomitable. Your customers are going to want this book; they are going to clamor for it. It is probably the most important book of the decade about lesbians and literature! How many boxes would you like me to ship?

Imagining her making those calls—her gruffness, her determination, her ebullience—makes me want to pick up the telephone and make calls on her behalf. I imagine an entire scene. Feel my fingers on the keypad of an old push button phone, hear the telephonic ring, wait for someone to answer (much of Grier’s work was before voice mail, before iPhones, and in some cases before answering machines). I imagine myself voicing her, demanding attention for this book, and promoting the continued importance of women and books, better together. Joanne Passet makes the pleasure of this fantasy, me as Grier promoting the best new book about lesbians and literature, possible. She brings Grier to life in the extraordinary new biography Indomitable from Bella Books.

Born in 1933, Grier knew she was a lesbian from an early age. Her mother, Dorothy, offered her the first titles for her lesbian reading list: Radclyffe Hall’s The Well of Loneliness and Marcia Davenport’s Of Lena Geyer. From there, Grier took up residence at public libraries to find more. She became an extraordinary mid-century sleuth detecting literary lesbians in the distant past and present. Ultimately, she devoted her life to researching lesbian literature and writing about it. As the rabbis say, the rest is commentary. And what rich commentary it is.

Indomitable divides Grier’s life into three parts. Passet characterizes the early years of Grier’s life as “virtual” when Grier’s engagement with other lesbians was primarily through letters and phone calls. During this period she lived with her partner, librarian Helen Bennett, and maintained extensive epistolary relationships. In the late 1960s, Grier enters “a movement life.” She edited The Ladder then started Naiad Press. The final phase of her life Passet characterizes as “entrepreneurial.” As Passet notes, throughout her movement and entrepreneurial lives, Grier adeptly balanced activist objectives with hard-won financial knowledge from her working class background and her employment as a bill collector.

Passet’s account of Grier’s life is narratively compelling and extensive. Though that description sounds obtuse; Grier preferred direct, plain-spoken language. Let me translate: Indomitable is easy to read and has lots of juicy bits. Epistolary flirtations, political conflicts, movement tousles, island vacations, and early morning telephone calls all have a place in Indomitable. If you, like me, love lesbian gossip—who was sleeping with whom, who was flirting, who was making eyes—this book satisfies. More than quenching my prurient interests, however, Passet presents Grier as a full human in Indomitable, including excavating her sexual and emotional lives. Lesbian sexualities and lesbian sensibilities are often sanitized for historical and popular narratives, but Passet refuses that impulse. She presents a full-body, full-hearted Grier. Reading the rich life story of a lesbian continues to be rare and an extraordinary pleasure.

Historiographically, Indomitable offers a number of insights into lesbian history. First, Grier’s work as a lesbian activist straddles multiple periods of activism—from the early homophile activism of the Daughters of Bilitis and One Magazine to queer activisms in the 1990s. Passet documents Grier’s intense engagements not only with the DOB but every homophile organization of the 1950s and 1960s. While her life was virtual, she was a virtual flâneuse, corresponding with every activist, organization, and publication of the period. Later, in the fractious lesbian-feminist 1980s, Grier finds herself in the center of the firestorm known now as lesbian sex wars. Naiad published Sapphistry: The Book of Lesbian Sexuality by Pat Califia in 1981. Then in 1984, Grier sold serial rights to Penthouse’s Forum magazine for a story from Lesbian Nuns: Breaking Silence; some women were enraged and condemned Grier. A lively conversation, albeit raucous and at times vicious, boiled around this act, including debates about pornography, the proper role of lesbian-feminist publishers, and social change strategies. Grier was at the center.

Ultimately, Grier’s life emerges as an interesting through line of lesbian activism in the twentieth century. Grier dedicates herself to lesbians and literature and uses each social and political formation that emerges during the century to further her mission-driven work. Biographies like Indomitable demonstrate how activist engagements endure over a lifetime. Grier’s life story and her on-going activist engagements are consistent with the lives of other lesbians recorded in biographies, for example Martin Duberman’s work on Barbara Deming, Judy Wu’s book on Doctor “Mom” Chung, and Lois Banner’s dual biography of Margaret Mead and Ruth Benedict. All of these life stories contribute to our understandings of activism as a sustained practice and not a brief moment of insight or action. Moreover, Indomitable and other biographies like it nurture new generations of activists demonstrating how to build campaign to campaign, amplifying work in the past without constantly needing to recreate or reimagine the wheel.

Passet also maps with sensitivity and care Grier’s economic background. She was from a working class family and class, money, and resources shaped Grier’s work and life. Passet’s treatment resists any political schematic. The narrative is grounded in Grier’s lived experiences and how those experiences shaped her life. For instance, Passet writes about how Grier amassed her world-class collection of LGBT books, “After identifying titles of books she wished to purchase, she scoured used bookstores and book catalogs until she located an affordable copy. Accustomed to begging, bartering and, on occasion, stealing, Barbara set out to build a comprehensive collection of gay and lesbian books.” Passet acknowledges Grier’s various modes of consumer engagement to build her collection and her frugality. By including these attentions in the biography, Passet demonstrates how important a class lens is to understand feminism and lesbianism in the twentieth century.

Passet animates the vital relationships between gay men and lesbians during various activist formations of the twentieth century. Grier knit alliances with gay men in her passion for books during the 1950s and 1960s. She recognized the significance of gay male media to the promotion of lesbian books and regularly sought serial opportunities and reviews in Christopher Street and The Advocate. Even at times when lesbians wanted to focus on building their own, strong communities, Grier was always catholic in her approach to serving lesbians and amplifying lesbian literature.

While never hagiographic, Indomitable does gloss some of the most intense conflicts of Grier’s life. It does not offer new insight into the conflict in DOB and the separation of The Ladder from the organization. Did Grier and Rita Laporte “steal” the list of subscribers from The Ladder? Or did they do what was necessary to save it? This narrative mutes the angry cries against Grier and Laporte around this incident. Similarly, the split between the two couples who founded Naiad (Grier and McBride and Marchant and Crawford) is brief and at moments perfunctory; history will be served by a more robust examination of this period in the press and in Grier’s life. These are minor points, however, in an extraordinary book and contribution to lesbian history.

Throughout Indomitable, the significance of Grier’s longtime partner Donna McBride emerges. McBride was an equal partner in Grier’s work from the time they met and fell in love in the early 1970s until Grier’s death. Similarly, Linda Hill, who eventually takes the reigns of Bella Books, the successor to Naiad, receives some attention in this biography. Both women, McBride and Hill, survive Grier and continue to carry on her legacy and work. Recognizing their work is vital as both deserve additional recognition and tributes.

Writing the life story of a person as influential, determined, and charismatic as Barbara Grier requires a biographer of equal talent. In Indomitable: The Life of Barbara Grier, Joanne Passet meets and exceeds that standard. Thoroughly researched and beautifully written, Indomitable is breathtaking in both its ambitions and execution. Buy this book and revel in Grier’s story.