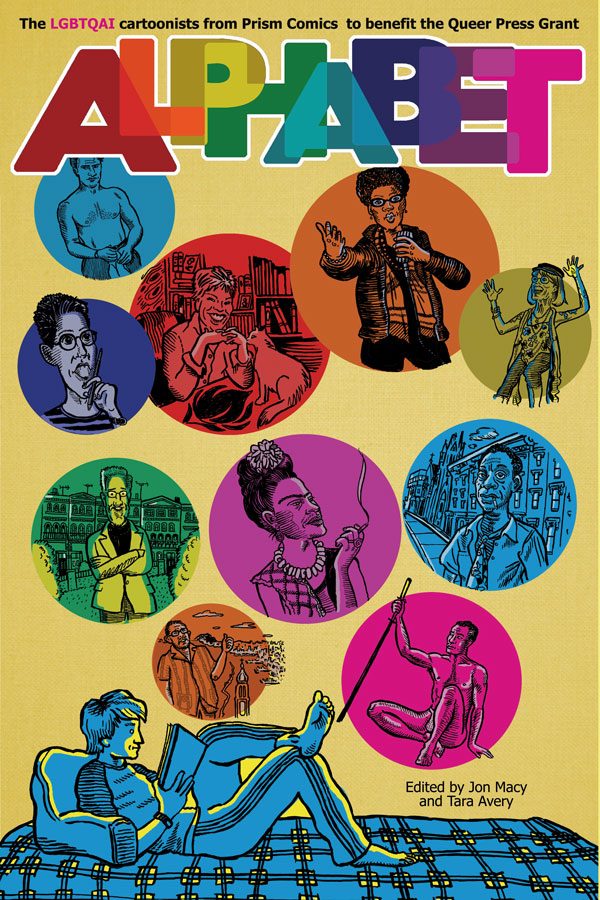 Reading Alphabet will plunge you into the welcoming rainbow of LGBTQAIU comics. This collection is thick and juicy, retrospective and introspective, futuristic, celebratory, exploratory, imaginative and thoughtful. And sexy and loving too! This hefty anthology was put out by Prism Comics, a nonprofit organization that promotes awareness of lesbian, gay, bisexual and transgender creators, stories, characters, and readers in the comics industry. One of the ways Prism does this is by sponsoring an annual Queer Press Grant, to assist in the publication and promotion of LGBT comics. Winners receive not only publishing assistance but also get help in promotion, tabling at cons, and panel appearances–much of which comics’ publishing necessitates.

This compilation features works from past winners, including Robert Kirby, Eric Orner, Hazel Newlevant, Justin Hall, Tana Ford, Ed Luce, Pam Harrison, and Jon Macy. Howard Cruse, Jennifer Camper, Roberta Gregory, Paige Braddock, Tyler Cohen and Dylan Edwards also contribute. Fifty-two artists in all contributed pieces for this volume, and, as Faith Cheltenham says in the introduction, “Many experiences and lived narratives share the heart of their homes with this book, and this anthology holds within it characters that are you and me, and every one of us in between.”

Early queer comics were mostly coming out stories, and there are some of those in this compilation too. But what’s exciting is the variety of storytelling encompassed here. “Requiem for a Hot Comb” by Ajuan Mance is a different kind of coming out story, sharing the narrator’s move away from processed hair to natural black hairstyles. Elizabeth Beier’s “V is for Virginia” reclaims lesbian history, by visualizing love letters between Virginia Woolf and Vita Sackville-West. “The Feminine Mystique” by Diego Gomez brilliantly inserts erased feminist, LGBT, and non-white histories back into the traditional textbook timeline. “Sorry Mom” by Vi Cao explains why being asexual isn’t a thing she needs to grow out of. Christianne Benedict’s “Here There be Monsters” rewrites the historical romance, while Jennifer Camper’s “How to Make a Comic about Who is a Woman” lambasts academic jargon’s struggle to define women in comics. And straight guys even get a moment–when two straight male actors struggle toward a gay kiss, in Howard Cruse’s hilarious “Love Among the Pheromones.”

The artwork here is dazzling too. Bex’s “Windows of the Skull” and “I’m in the Amoral Camp” by Dylan Good employ panels of lush painting to convey their tales. Dave Quantic and Bill Ferenc contribute one-panel gag comics, á la the New Yorker, but with queer bears, unicorns, and aliens. Emeric Kennard’s foreboding black and white drawings set the mood for “ Haunted House.” Even the endpapers in this book are decorated with a wallpaper of Eric Orner’s charismatic queer heroes and heroines.

Best for cartoonists and creative people, a number of the artists share formative stories of their cartoon careers–and how Prism helped them. “Lost in the Maze” by Soizick Jaffre remembers being a kid cartoonist, while Tana Ford’s and Victor Hodges’ pieces share the artists’ breakthroughs and formative meetings with the creators of queer comics they idolized.

Editor Jon Macy’s comic “The Real Superheroes” sums up this book well. Macy dropped out of comics in the 90s, but was re-inspired when he became involved with Prism, first volunteering, then publishing, and helping out at conventions. Jon states, “Seeing the queer panels packed with people, and the booth swamped with fans, made me realize we were on the right track.” This book is the result of that good energy, and is highly recommended for queer comics fans and creators, both seasoned and those new to the game.

‘The Winder Path’ by Lyn Dowland
'We Come Elemental' by Tamiko Beyer
Andrea Jenkins: Unwrapping the Vastness of the Imagination