The Orlando Massacre: Writers Respond with Sadness and Outrage

The Orlando Massacre: Writers Respond with Sadness and Outrage 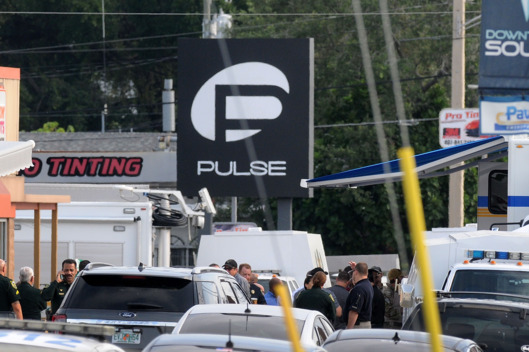 The tragic mass shooting on Sunday night at the popular Orlando, Florida gay nightclub Pulse, has been confirmed as “the worst shooting in American history.” The massacre left 49 dead and an additional 53 hospitalized, many with critical injuries. The suspected gunman, 29-year-old U.S. citizen Omar Mateen was found dead at the scene. The shooting, which follows a sadly interminable history of violence in LGBT nightclubs, is now being considered the largest hate crime in U.S. LGBT history.

LGBT and allied writers took to social media (Facebook, Twitter, and personal blogs) with a mix of outrage, sorrow, and thoughtful reflection.

They’re killing Queers and Showgirls. They wish to silence the singing, dancing, and all that brings joy into our hearts and bodies by attacking community, sexuality, and freedom. But even as we mourn our losses, we never forget those we’ve lost, and we never let go of the joy their lives represent. Fuck the terrorists, religious extremists, forces of oppression and their spiritual sickness. They are a death cult. Our response is and always has been to love, laugh, sing, and live on!!! I’m writing this with tears in my eyes but I know they’ll dry and we will never be defeated. Bless those whose lives were so brutally taken this weekend, bless their lovers and their families -and we are all their families. This is not over and we will never quit being who we are fiercely, proudly and joyously. We rage, we rise, we never forget. Live life to the fullest every day you can and love radically. Love as radically and hard as possible. Blessed be.

The first of the events that would historically become known as “AIDS benefits” took place at a dance club, Paradise Garage, in 1982. So much organizing happened via the clubs in so many cities and towns in the 1980s, and it still does. I know most of you well realize that dance clubs and dancing itself are at the heart of LGBTQ community building and activism. Club owners and patrons have served as he public face of the LGBTQ community in countless parades and other public events, carrying pride and goodwill and activism into the streets. Clubs have also historically been safe spaces for men and women who face brutal homophobia in their work, family, and otherwise public lives. And theyre where young heterosexual people (like me) have been able to experience, however provisionally, sensuality and joy within a queer paradigm. Clubs are havens and utopias. They remake our bodies and our psyches into more receptive organisms. They originate and sustain new families. This is one reason why so many clubs have had names like the Sanctuary, Neighbors, Tribe…Pulse. To violate this space is to go to the heart, the root. I mourn.

Sorrow this morning, inescapable. Watering the garden, walking the dogs in the park, buying milk. Imagining what it was like for the people who’d gone out to dance, their three unthinkable hours, and how it is this morning for the survivors, and for everyone who knows someone lost last night, for those who don’t yet know that someone won’t be coming home. And rage, too, at the opportunistic Lt Governor of Texas, who dares to say that those who died “reap what they sowed.” In other words, they asked for it. I’m going to make myself a list of everyone I can think of, every citizen of my country lost, in these last years, to goddamn guns (or tasers or strangleholds or knives or fists or sheer neglect), every one who asked for it by being queer or black or poor, or the wrong gender in the wrong place, the wrong faith, the wrong language, wearing the wrong body. It’s easier to be furious than it is to grieve, in part because when I do get around to grieving it’s for every queer person I ever knew stripped of dignity, or tossed out by a family, or attacked on the street. It’s myself, of course, though not just myself I’m grieving for.

From poet and essayist Saeed Jones:

I am very saddened to hear about the horrific massacre in Orlando, Florida. Homophobia, transphobia, and ideologically-nurtured hatreds of all kinds, coupled with semi-automatic weapons, provide the fuel for terror, in this case literally. Another sad and perverse irony is that this occurred during LGBTIQ Pride Month, at a club that was full of Latinx and other POC queer people. In solidarity, I send my thoughts and prayers to those murdered, and their friends and families.

From writer and critic Joseph Salvatore:

This is a day when the news makes me physically sick, manifesting itself in my body, somewhere under my skin, along and around my bones, in my stomach, oily and vast. I need to keep identifying this feeling and reminding myself of its oceanic power, constantly and constantly reminding myself, for fear if I lose sight of it for a minute, I’ll get swept under. A constant psychic vigilance that seems now to be our human condition, like it or not; and the very effort to maintain that control contributes even more to the sickness. A lifetime, it now seems, of maintaining control. Of keeping this feeling always in check. And there is no turning off the news. Not anymore. For it is no longer news. It is now simply an update of the same news taking place outside our door. Over and over again. And today I am weakened by it. And that weakness feels akin—forgive me for the drama here—feels akin to death. (I know of no other way to express it.) And if there be any relief, then the only relief, candle-brief though it be, is to hug my children, to hold their little live bodies in my arms and breathe in their skin. And then to hug my spouse and hold that live body in my live arms while we are still alive. And to acknowledge that tremendous gift while we still can. Then I’ll let them hug my live body so I can stop being the subject of this hug and become simply its object. Receive the hug entirely. Shut my eyes and allow myself to experience that brief respite—allow myself to be, in their arms, fearlessly swept under.

Queer comrades–To experience public joy & pleasure, to love who we want and how, to be embodied as we see fit, to open our bodies to music and dance, to simply feel free, is to be a Queer Warrior in this country. We know the historical and systematic annihilation of queer people (how many trans people have been murdered in this country in the last two years?!!) is a problem inherent to how America does its homophobic and transphobic work. It has nothing to do with Islam. My heart aches for those gunned down in Florida and for those gunned down one by one everyday.

The patterns of US mass killings show that any group of people are vulnerable: Latino gay people in a club, Black church goers, little kids in grade school, people in the movies, high school students, co-workers at a Christmas party. What can we conclude? While race, sexuality etc are important in specific choices of victims, the larger reality is that gun availability, fear of identifying mental illness, and rhetoric normalizing violence are the problems. And since the killers are almost all men, there is a lot of thinking to do about male concepts of control. But escalating policing that is already too violent, condemning larger communities of humans, or projecting that we should walk around in fear of strangers, is the opposite of where we should be going.

To Omar Mateen and all others who plot violence against the LGBT community:

We aren’t afraid of you.

We know real fear. For many of us who grew up lesbian, gay, bisexual or transgender, our greatest fear was never your automatic weapons, your fists or anything else born in your depraved heart.

Real fear was being unloved. By our parents, our siblings. By our extended families and dearest friends. By our schools, churches, workplaces and communities.

There’s nothing you can ever do to us that scares us more than the thought of losing love. But once we revealed ourselves to others — no matter the outcome — our worst fear was forever behind us.

So if your aim was to leave us in terror, you lose.

We are wounded. But as we mourn, we’ll honor those with the courage to celebrate their lives openly while you and your kind live in the dark like cockroaches.

We’ve seen much worse than you. We don’t do fear anymore.

From writer and activist Darnell Moore:

If we don’t understand that material bullets are a consequence of the ideological bullets we target at folk everyday we too are complicit. Can’t shed tears over the tragic shooting of people enjoying their night at a gay club and still believe queer and trans folk are abhorrent. Can’t be a supporter of laws that make discrimination against LGBTQI people possible and cry when folk harm us.

I am sitting in Starbucks right now typing this on my iPhone through rage-filled tears having just read about this tragedy in Orlando – a tragedy written not only in the blood of its victims but in this country’s fetish for guns and its homophobia that is stoked by fundamentalist religionists of every stripe. But since I grew up in the radical right-wing environment of southern gun-loving Christianist bigotry let me be very clear here in my rage and sorrow: every homophobic preacher in every pulpit and everyone who agrees with the demonization of gay people and every politician who bows to this kind of bigotry as Donald Trump did this week has blood on their hands this morning. Keep your words of solace to yourself. They are empty of meaning when you offer only words of hatred toward the LGBT community through your religionist and political rhetoric. Solace does not make you innocent of this massacre. It just makes you hypocritical in your cultural complicity in it.

I offer my own solace and prayers to those slain and those who loved them.

Because as angry as I am at right-wing radical religionists on this Sunday morning, I finally turn to prayer. The God of my understanding prevails. Sustains me. And will heal this anger. May She heal us all.

But fuck, folks, my anger in this moment is fierce and deeply felt. And folded into any sense of hope I can muster.

And in an elegiac Facebook post, poet Natalie Diaz wrote, “50 people are dead not for who they hurt but for how they loved: they love the way I do [.]”