‘The Death of Fred Astaire’ by Leslie Lawrence

‘The Death of Fred Astaire’ by Leslie Lawrence 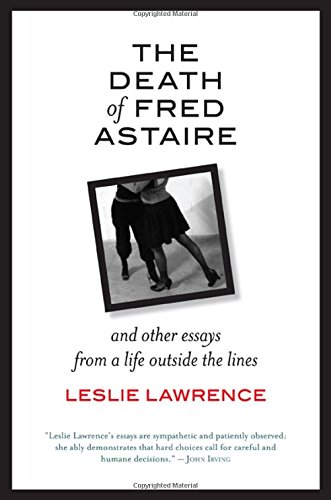 “Or: there’s a huge body of water. A young woman jumps in. There is air (sky) way down on the other side of the water, so instead of coming up to breathe, you have to go through to the other side.” — Leslie Lawrence, The Death of Fred Astaire

Once, while on residency in Sewanee, Tennessee, a fellow writer and I snuck a mattress from our dorm room and took it to the reservoir down the road. It was the middle of the night, he’d had a tent and a sleeping bag in the truck he’d driven up from north Georgia, and we’d carried the mattress through a long path in pitch blackness until we came to the end of a long dock—the same dock we’d escape to after a long day of workshopping, and swim. The night had been a tempestuous one, and the moment we’d set up camp, the moment we’d gotten inside the tent and begun to get under our respective covers, it began to monsoon something fierce.

Leslie Lawrence’s book, The Death of Fred Astaire and Other Essays From a Life Outside the Lines is a beautifully curated collection that is full of moments like this: instances in the writer’s life that came sharply into focus, that became the very crux of a moment passing.

Do you remember the famous scene in Virginia Woolf’s To the Lighthouse, where Mrs. Ramsey watches her family eat dinner, and the edges of memory turn to black around it? She is, in essence, describing the passing of time, the moment a real-time moment becomes a past-time moment. It’s a difficult thing to do, to catch the transition period right before it solidifies to memory–it’s like firing silver clay, and waiting for the millisecond the flame turns green-hot, signaling that the fiber has burned off, and the material has become fine silver, hard and resilient from its pliant form.

But good writers and thinkers know that memory may be the only thing that works differently—that the moment something turns from present to past, it ceases to be firm and instead becomes malleable. We are, as humans, unreliable narrators. And in The Death of Fred Astaire, Lawrence acknowledges that human flaw with ineffable grace. What’s more, she utilizes it as a craft tool, allowing the reader their own sense of autonomy and malleability within the framework of their reading. A chapter on turning fifty becomes, to the reader, a moment of reflection on their own life, an opportunity to examine the moment a transition happened, whether it was marked by time (however tangible that may be), or randomized.

The book shares stories too numerous and varied to be mentioned within this review, however, the breadth of subjects covered is impressively and skillfully rendered. From her own grappling with identity (both gender and sexuality, parenthood, aging, landscape, partnership, etc) to her musings on memory itself (primarily, her father and his connection to Fred Astaire/the art that provides context for her childhood), Lawrence’s essay collection glitters with those transitional moments of present becoming memory.

'The Aversive Clause' by B.C. Edwards
'Hammer!' by Barbara Hammer
'A Crown of Violets' by Renée Vivien, translated by Samantha Pious