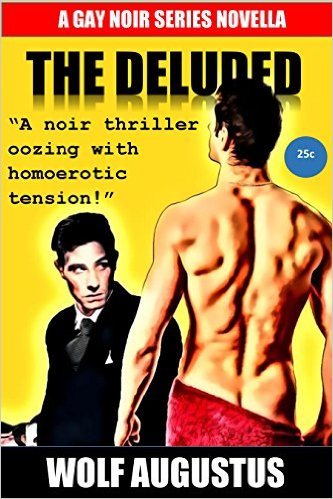 Crime stories often lend themselves well to historical fiction. After all, many crime narratives are about uncovering the past. Some LGBTQ crime writers set their novels in a specific historical moment, such the 1940s and 1950s, invoking the rich stylized tradition of hard-boiled fiction. In these novels, the writers aren’t just excavating layers of obfuscation to reveal the truth, they are using fiction to make visible the presence of LGBTQ persons during a time period in which mainstream society, perched high on its hypocritical moral pedestal, did everything it could to assure that queer stories were deemed prurient and therefore unworthy of remembering. So the LGBTQ historical crime novel has a dual function: first, to uncover the particular past, true actions and motivations of a set of characters; and second, to re-insert queer characters back into a time period (and a genre) that for the most part, has excluded them, or at least un-stereotypical representations of them. The idea being: if we write a popular style of narrative, such as the hardboiled detective story, especially one associated with a particular time period, from an LGBTQ perspective then how we view that slice of history will begin to shift. After all, literature and film, not just reportage, goes a long way in molding our impression of the past.

I’m going to briefly discuss three crime novels—although there are many more—that attempt to reclaim the past in this dual manner, each in a different way. To be transparent: I hope that by touching on these novels, I can encourage readers to pick up (or download) these books as well as convince more LGBTQ writers to write historical fiction, especially historical fiction in popular genres like crime, so that we can continue to revise our cultural memory to include the voices that mainstream history has shunned.

Steve Neil Johnson’s Yellow Canary, the first in his L. A. After Midnight Quartet and a Lambda Literary Award Finalist, is set in 1956 and places Paul Winters, a closeted prosecutor in the District Attorney’s Office, at the center of a mystery involving the suspicious suicide of a gay man while in custody. Johnson also addresses the perspective of Jim Blake, the handsome cop responsible for baiting the victim in a gay bar. Winter’s sense of responsibility and Blake’s guilt draw them together, first as antagonists then as lovers, despite Winter’s long time relationship with another man. Winters wants to protect his career during a time when being outed would have devastated his professional life. Blake is in denial about his sexuality, which causes him, in the homophobic environment of the LAPD, to set in motion the series of events that lead to the arrest and death of an innocent gay man. The two men are drawn to each other because they both have a strong sense of justice and also because they are attracted to one another, an equally powerful, but more complicated motive. The Yellow Canary is meticulously researched, confident in tone, and brisk in pacing; however, its greatest virtue is that its central characters are at times faltering, self-interested, and flawed, reminiscent of James Elroy’s protagonists in L.A. Confidential and The Black Dahlia, also part of an L.A. quartet, clearly a source of inspiration for Johnson.

Set in 1951, Katie Gilmartin’s Blackmail, My Love: A Murder Mystery, her debut novel that won the 2015 Lambda Literary Award for Best Gay Fiction, follows Josie O’Conner, a young woman who has come to San Francisco to find her gay brother, a detective who was investigating a blackmail ring when he went missing. Gilmartin’s novel, like Johnson’s, is thoroughly researched and replete with vivid period detail concerning the horrible treatment of LGBTQ persons at the hands of the SFPD and, with equal measure, the exuberance of San Francisco’s underground queer community. Not only does Gilmartin take on queer life of the 1950s, but also, through the perspective of Josie, she challenges rigid post-war gender stereotypes. In order to get more traction in her investigation, Josie dons men’s clothes and becomes Joe. She can “act more powerful in shoes and trousers,” and although she learns she still has to deal with discrimination as cross dresser, wearing men’s clothes gains her access to the queer community, through whom she discovers allies, a lover, and eventually the truth about her brother. At one point, she transforms herself into a “meddling matronette,” a paragon of righteous female virtue, in order to manipulate a journalist and leak a story, suggesting that gender stereotypes, male or female, if treated as constructions, can be used to counter-manipulate members of the dominate culture. Gilmartin’s Josie emerges not flawed, as Johnson’s characters do, but fluid—a character who, despite her time period’s static and strict gender roles, is willing to shift her identity to find her brother; as she transforms herself, she too is transformed. This historical moment and the hard-boiled sub-genre needs Josie O’Conner. She is as tough and witty as Chandler’s Philip Marlowe, but more complex, vulnerable, and psychologically available than Chandler’s iconic character.

The Deluded a novella by Wolf Augustus (Olivier Bosman) is noir to the bone. Set in London in 1949, it’s the story of Fitz O’Sullivan, an earnest young man who wishes to eschew his comfortable lifestyle and transform himself into a serious writer. He moves to the East End and is befriended by Roy Parker, a handsome and seductive working class man, who asks him to chronicle how he rescued two Jewish women during the war. Roy is a fantasist, and the tale he tells Fitz is self-aggrandizing and far from fact, but Fitz, naive and romantic, becomes enamored with Roy, who uses his rough-edged masculinity to manipulate him. As the novella unwinds, Augustus weaves the past and present together seamlessly, invoking the haunting temporal fluctuations in great films noir, like Out of the Past, suggesting, as these films do, that any attempt to obscure the past is futile: the ugly truth will emerge and have its reckoning. Most of the characters in The Deluded are unsavory and repugnant, but the story is no less compelling. With his sharp, controlled style and his understanding of the structure of a traditional noir narrative, like that of Cain’s Postman Always Rings Twice, Augustus admirably navigates a gritty story, which lingers after its final pages. At the end, he cleverly shifts the story into a metafictional space, where we’re left wondering if what we’ve read is fiction or thinly veiled nonfiction, a tension that The Yellow Canary and Blackmail, My Love suggest through rich historical detail, but only The Deluded directly exposes and urges us to consider. We wonder if what we’ve just read is the truth of someone’s life or merely a clever move by a talented writer. Regardless, we’re compelled to consider the fine line between truth and fiction, a mainstream interpretation of history and much-suppressed LGBTQ history.

Fieldwork in Being a Brown Man
'Since I Lay My Burden Down' by Brontez Purnell
‘The Narrow Door: A Memoir of Friendship’ by Paul Lisicky