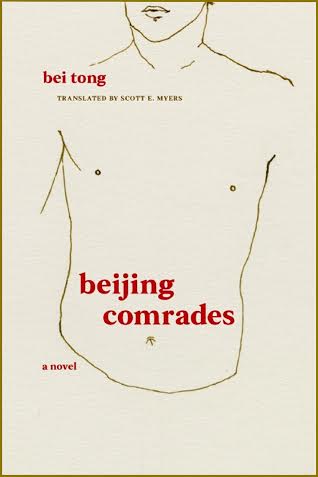 Beijing Comrades is a beautifully written love story that features characters who are fully developed, complex, and believably human. (A reviewer must sometimes be forgiven for coming straight to the point.) The book is remarkable for this realistically rendered romance, its explicit sexual encounters, and the elaborate, heartbreaking power-plays between the characters. Handong Chen, a powerful businessman in late-1980s China, and Lan Yu, the bright but naïve architecture student whom Handong tries to control like a concubine, remind us of people we have known. We feast on a rich slice of Chinese culture while watching these men grow over a ten-year period. And we submit to the suspenseful drama of political upheaval surrounding the 1989 Tian’anmen Square massacre, which plays a vital role in the love story.

A beautiful tale, well told, can be sabotaged if it arrives in the reader’s life embedded in a book that the world considers socially, politically, and culturally “important.” How many of us have avoided writers like Colm Tóibín or Virginia Woolf because of their reputations as—Yawn!—“important authors,” only to stumble eventually across wonderfully accessible books like The Story of the Night or Mrs. Dalloway?

Thus, I have been determined to introduce this review with what is truly important to me—that Beijing Comrades is a good read, an inspiring and tender but unpredictable love story, rendered very gracefully into English. But now I must acknowledge that this—the only English translation since the book’s original 1998 online publication, a feature film adaptation, and two print editions—does indeed happen to be an “important” publishing event. Beijing Comrades is both a valuable piece of global gay history and a political phenomenon.

With the founding of the People’s Republic of China in 1949, the Chinese Communist Party adopted the Soviet template and treated homosexuality as a symptom of bourgeois decadence. Gay people were harshly punished during the 1960s national purge of the Cultural Revolution. Vaguely defined “hooliganism,” laws employed biblical-sounding condemnations of same-sex acts and equated them with prostitution. These laws were repealed in 1997, but many LGBT people in China continue to live in fear of blackmail and ruin. Ancestor-worship officially ended in China in 1949, together with the abolition of institutional religion. But ancient tradition, which continues to dictate that a child’s primary duty is to provide heirs, embitters many families against their gay offspring, and causes them grief for these children—who, according to the tradition, will grow old with no one to care for them.

Gore Vidal admonished us to remember that “sex is politics,” and Beijing Comrades starkly brings home this simple dynamic. Handong and Lan Yu must navigate the treacherous waters where money and love crash on the rocks of a society newly acknowledging the realities of wealth and inequality.

Handong’s exalted social position tragically blinds him to the possibility of loving another man in any way that isn’t primarily physical, emotionally exploitative, and founded on financial inequality. Lan Yu, his young lover, is determined to maintain his autonomy and self-respect, and must resist the older man’s attempts to buy his love, even as his own love for Handong deepens.

Handong narrates the book, and thus controls how we see him. He is a man accustomed to carefully managing his relationships and everything else he touches. He lets us see his control begin to crack, when his love for Lan Yu surprises and even frightens him, and our understanding of his panic catches us off guard. Unlike most control freaks in literature, he earns our empathy. In Lolita, Humbert’s self-awareness appalls us. Here, Handong’s gives us sad hope. He describes to us how he ridiculed Lan Yu’s political fervor, then agonized over the fate of the students at Tian’anmen.

The Chinese government continues today to suppress any mention, online or in print, of the events of June 4, 1989, when troops opened fire on unarmed student pro-democracy demonstrators. By official tally, the soldiers killed 291 demonstrators—but, according to observers, as many as 3,000 people died. Beijing Comrades covers the Tian’anmen massacre in personal detail. What first caught the attention of the West were televised images of young people erecting a 30-foot statue from styrofoam and plaster—the “Goddess of Democracy,” who bore a striking resemblance to the Statue of Liberty. We watched those students camped in Beijing’s central square, and in horror, on live television, we saw them being beaten and shot. The TV broadcasts abruptly stopped. In those days before the internet and camera phones, reporters used fax machines to send reports to worldwide news organizations. We learned that the bodies of the martyred students were piled together, soaked with gasoline, and burned.

Among the many things we take for granted in an open society is the freedom to pursue notoriety. When an author publishes under a pseudonym, our Western drive for recognition is confused. Why does someone go to the trouble of writing a book only to put an assumed name on it?

The author’s pen-name, Bei Tong, is a shortened version of “Beijing Tongzhi”—incorporating the word for “comrade” that roughly translates as “same aspiration” and, increasingly, is used to mean “gay,” in the way that we in the U.S. use “family” to make the same implication. Whoever the real Bei Tong may be, he or she is not playing coy like Stephen King and other successful Western writers who launch fresh franchises under their pen names. Beijing Comrades may be a collaborative effort, the work of a collective called “Queer Comrades,” whose website announces that it is “China’s only non-profit LGBT webcast.” The website of the book’s English-language publisher, The Feminist Press at City University of New York, explains that “the pseudonymous author’s real-world identity has been a subject of debate since the story was first published on a gay Chinese website over a decade ago.”

The book’s title, like the author’s pen-name, works as code. In the way that “Boston Marriage” and “Friend of Dorothy” have long held special meanings for select U.S. readers, meanings obscure to the uninitiated, “Beijing Comrades” refers to an understanding of “homosexual lovers” in contemporary Chinese culture.

The book’s translator, Scott E. Myers, traces in his introductory note the twists and turns of Beijing Comrade’s online Chinese-language edition, the two subsequent Chinese print editions, and the 2001 film Lan Yu, which was based on the online edition of the book and honored at China’s first LGBTQ film festival. Rather than settle on a single edition of the book for his translation, Myers carefully culled material from the original online manuscript, with its raw sexuality, while drawing on the maturity of the characters that he found in the two print versions, from which the author had removed some explicit sex scenes possibly in the hope of winning government approval for publication. Finally, he included new material that the author submitted to him only for the English-language edition—presumably through email, because Myers claims not to know whether Bei Tong is a man or a woman. For this reader, the translator’s devotion was well worth his considerable effort.

The book, then, is a record of social upheaval and evolution, and Myers shows us its vital place in Chinese culture and history. But let us not forget that if the book were poorly written, and told the story of unbelievable characters engaged in inconceivable endeavors, it would be tedious to read, however “important” a role it might play in the history of LGBT rights in China. Instead, it is a book from which we can learn much about Chinese culture even while we identify with its human themes. The book educates us, certainly, but it also entertains, moves, and thrills us.

In an erudite afterword, professor Petrus Liu of Singapore’s Yale-NUS College analyzes the book’s “cultural politics” and its role in defining an entire generation. He considers Beijing Comrades, with its “complex cultural fantasy of the separability of human connectedness (gay or straight) from economic entanglements,” a “refreshing work that covers uncharted territory in Chinese queer writing.”

Analyzes of this sort surely will help guarantee that Beijing Comrades will be read and discussed, and even taught in cross-cultural queer studies courses, years from now. But the universal themes, and the deeply personal rendering of the story, endear the characters to us in ways quite distinct from the book’s importance as a monument of literature and queer theory.

'The Lotterys More or Less' by Emma Donoghue and Illustrated by Caroline Hadilaksono
Low Fidelity: Stephen McCauley on the 'Myth of Monogamy'
'The Blue Clerk' by Dionne Brand