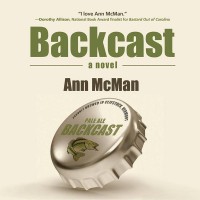 Sculptor Barb Davis has a vision. With a grant from the National Endowment for the Arts, she plans to bring together a group of authors to write essays which Barb will use as inspiration to create an art piece to convey a cohesive artistic expression.

When the women Barb has chosen gather for the project’s writing retreat, drama and hijinks abound and it starts to look as if the venture will never be successful. First, there’s the constant bickering between Viv and Towanda. Then there’s Quinn, who’s very distracted because of her focus on winning a Pro-Am bass fishing tournament and she’s never wielded a rod in her life. Kate and Shawn bring their own problems. The two obviously love each other, but they can’t seem to figure out how to be together; and that’s only a small portion of the issues the two women bring to the group. Barb herself is an enigma. She’s obviously a talented artist, but something seems a little off—and you have to wonder why has she chosen the acerbic Mavis Pants to come along on this journey?

McMan has a lot of story to tell and, as she reveals more and more about the characters of Backcast, something magical begins to happen. At first blush, the title seems to take its name from a fishing technique. However, the characters are also spied drinking Backcast Ale at the resort bar where the retreat takes place. Finally, as the author essays unfold, we realize that the short backward motion in fly fishing to prepare the line for its forward cast is a metaphor for the deeper meaning of the story. The glimpses we get of the women’s past experiences make us feel deeply for them, and we see how the events serve to thrust them—and us with them—forward into a future full of promise or of undefined possibilities.

Throughout these deep, soul-exposing revelations, the story is filled with quirkiness and humor. Most notably, there’s Quinn. She’s never fished before and she has a lot to learn from a legendary bass comically named Phoebe. Turns out, what she learns is more about her own strength than about how to win a fishing tournament. The other authors vacillate between mockery and mild interest in what Quinn is doing, but an underlying respect for the character and her undertaking is always present. Finally, the knock-down, drag-out fights that occur, both physically and verbally, make for some pretty humorous and remarkable dialogue among the populace of the story. Then, there are the side bets on outcomes.

Thirteen characters are skillfully presented with important roles to play within the story. The authors are expertly interwoven and linked, like the final sculpture Barb creates, with a thread that binds them together through experiences, interactions, and in some cases, romance. Minor characters support the story well without overshadowing the main roles, and dialogue is crisp and well written, giving us a clear picture of each woman with varied personalities ranging from shy and introspective to brassy, take-no-prisoners types.

The story is lighter on narrative in comparison to dialogue, but it works well. Within a scene, two or a few characters interact with each other, which helps parse out the story and prevents the sheer number of characters from overwhelming the reader. However, use of passive voice in descriptive passages sometimes presents missed opportunities for stronger writing of the narrative itself. This aside, McMan is the master of metaphor, using the perfect imagery to shore up feelings and experiences. She skillfully surrounds the character’s essays with an air of mystery, leaving out the author’s identity when each essay appears. Some authors are easily recognized. Some are more obscure, leaving our minds to puzzle out what we have read with questions dangling like gossamer threads until the very last of the story is revealed and the final character divulges the motivation for it all.

Backcast is a memorable story about the unbreakable strength and resilience of women. Skillfully executed, the story is easy to become emotionally invested in, with characters that are guaranteed to entertain and enthrall.