A Poem by Brian Thorstenson

A Poem by Brian Thorstenson 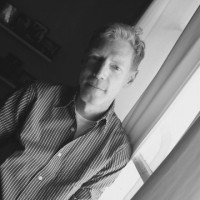 THE FIRST TIME I HEARD SYLVESTER’S SOONER OR LATER

was on vinyl. Not ironic
vinyl or collector
vinyl, but original
vinyl, from a record store.

It was new years eve 1986? 1987?
moments after midnight when
Weisman dropped the needle
of his turntable onto the third

track, flip side, the penultimate
track, a late 80’s electronic
dance beat kicking in, and the
room, hardwood floors off the

panhandle, erupting with gay
men dancing, then up a notch
as Sylvester’s voice soared in
and the gospel tinged back-up

singers started takin us to church.
Sooner or later I’ll be lovin you.
I was dancing with Jono who
always looked stoned, and maybe

was, who always looked like
he’d just come from the best
fuck of his life, and maybe had.
I’m searching for a one-way

ticket to paradise, sooner or later.
This was before Sylvester would
get sick and die, before Jono
followed, before and during.

Now I play the song for my
students, a writing exercise,
asking them to imagine some
scene triggered by that beat,

by that voice, imagine a time
before any of them were born.
They have no idea who Sylvester
was, and they rarely ask, no idea

that every gay man who met
Jono knew they’d found
a reason to stomp their feet,
shout out a Hallelujah,

though few of us believed in god,
not then, maybe the universe,
maybe, but mostly in each other,
no idea, and how could they,

that my friends and I danced
one dark new year’s eve at
the start of so many more
dark new years, danced to

this song that Weismann picked
to play at the stroke of midnight
which is why I’m playing it
for them this fall afternoon.

LGBT Friendly Colleges, the Art of Writing Lists About Poetry, and Tips for Emerging Writers
A Poem by Rebecca Maillet
Kokumo: On Her New Poetry Collection, the Search For Love, and the Determination to Survive