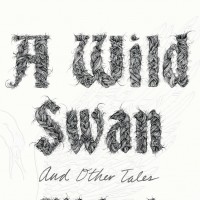 Fall is here, bringing with it a slew of new books to enjoy.

This month, Farrar, Strauss, and Giroux is releasing Michael Cunningham’s A Wild Swan and Other Tales, a short story collection that offers contemporary takes on popular fairy tales.

A poisoned apple and a monkey’s paw with the power to change fate; a girl whose extraordinarily long hair causes catastrophe; a man with one human arm and one swan’s wing; and a house deep in the forest, constructed of gumdrops and gingerbread, vanilla frosting and boiled sugar. In A Wild Swan and Other Tales, the people and the talismans of lands far, far away—the mythic figures of our childhoods and the source of so much of our wonder—are transformed by Michael Cunningham into stories of sublime revelation.

Here are the moments that our fairy tales forgot or deliberately concealed: the years after a spell is broken, the rapturous instant of a miracle unexpectedly realized, or the fate of a prince only half cured of a curse. The Beast stands ahead of you in line at the convenience store, buying smokes and a Slim Jim, his devouring smile aimed at the cashier. A malformed little man with a knack for minor acts of wizardry goes to disastrous lengths to procure a child. A loutish and lazy Jack prefers living in his mother’s basement to getting a job, until the day he trades a cow for a handful of magic beans.

She Writes Press is releasing The Great Bravura, a new mystery novel from Jill Dearman:

Since adolescence, Bravura and salt of the earth Susie have been partners in magic and best friends, as well as occasional bedmates. But when the two performers hire the mysterious and alluring Lena as a third banana to jazz up the act, Bravura falls madly in love. Lena believes in magic―and not just the rabbit-out-of-a hat kind. She encourages Bravura to believe in her own supernatural powers, and when Susie balks, conflict ensues. Things really go south during the classic “Disappearing Box” act, when Susie disappears for real. With her pal presumed dead, and Bravura the prime suspect, the magician must act quickly to find Susie―hopefully alive! To prove her innocence, Bravura must uncover the holes in her own story―even if it means incriminating herself, and her precious Lena, in the process.

In 1996, Leah Lakshmi Piepzna-Samarasinha ran away from America with two backpacks and ended up in Canada, where she discovered queer anarchopunk love and revolution, yet remained haunted by the reasons she left home in the first place. This passionate and riveting memoir is a mixtape of dreams and nightmares, of immigration court lineups and queer South Asian dance nights; it reveals how a disabled queer woman of color and abuse survivor navigates the dirty river of the past and, as the subtitle suggests, “dreams her way home.”

John McManus’s stories encompass the geographic limits of America, from trailers hidden in deep Southern woods to an Arkansas ranch converted into an elephant refuge; from Florida beaches to Western canyon trails and the sheer rock-faces in our national parks. And everywhere the pervasive road—four-lane interstates and harrowing county highways—along which McManus’s characters blaze. These lost souls reel precariously between common anxiety and drug-enhanced paranoia, between sober reality and fearsome hallucination. In “Elephant Sanctuary,” a cool-but-caring rock star flees the scene where he left his fiancée to die and hides out with his con-man father, a man beyond all redemption. “Betsy from Pike” presents a tabloid-ready murderer preparing for remorse if she can only find out what it is. In “Blood Brothers” an addict impossibly in thrall to a brutal meth cook sinks through successive levels of harrowing self-degradation for what just might, in the end, be true love. These nine masterpieces of twisted humor and deep pathos re-establish John McManus as one of the most bracing voices of our time, a writer who seduces the reader from the very first sentence.

In Wedlocked: The Perils of Marriage Equality (NYU Press) writer Katherine Franke turns a critical eye to the recent advances in the LGBT rights movement:

The staggering string of victories by the gay rights movement’s campaign for marriage equality raises questions not only about how gay people have been able to successfully deploy marriage to elevate their social and legal reputation, but also what kind of freedom and equality the ability to marry can mobilize.

Wedlocked turns to history to compare today’s same-sex marriage movement to the experiences of newly emancipated black people in the mid-nineteenth century, when they were able to legally marry for the first time. Maintaining that the transition to greater freedom was both wondrous and perilous for newly emancipated people, Katherine Franke relates stories of former slaves’ involvements with marriage and draws lessons that serve as cautionary tales for today’s marriage rights movements.