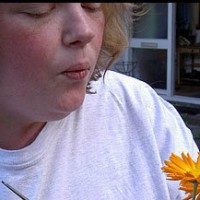 Her emerald eyes meeting and catching the raven-haired policewoman’s cool cerulean gaze, Gabrielle Amazone-Bart inhaled deeply. The creamy roundness of her firm love udders strained the fabric of her jacket to the bursting point, until with a sound like a gunshot, the buttons broke free and flew like bullets around the room, releasing her bouncy, perky, strawberry-tipped buxom balloons, which floated free like miniature Hindenburgs, but far less flammable.

That was Nene, showing off her extraordinary gift for creative wordsmithing in what was possibly the most painfully visual, cliché-ridden, cringe-inducing parody of fanfiction the Xena community had ever seen. And a howler it was. “Throwing the jokes thick and fast,” she said of her comedic writing.

Nene could make you laugh, but she was no prisoner to a single genre. A born storyteller who found inspiration in everything around her, she took lesbian readers through the cobblestones of Victorian England, the brothels of Shogun Japan, the wilds of the Yukon and upon the high seas.

Though she kicked off her writing portfolio with short stories posted on Xena fanfiction sites, she refused to be bound by convention. Her Gaslight novels—“Jack the Ripper, Sherlock Holmes and lesbian detectives”—were her first attempt at dramatic original storytelling. At least that’s what she’d have you think. Most of us who followed Nene’s career recall an even earlier work, The Sunne in Gold, beloved by readers but detested by its creator. “Let me just say that Satan and his minions will be getting chillblains before I ever allow that book to be published again, and if I had the money, I’d buy every copy and burn it, then stamp on the ashes and sow them with salt.”

Yes, she used the word “chillblains.” You could always count on Nene to send you running to The Google, because picking up one of her books was like going to school. Such was her fascination with authenticity. “Adding period details to a story helps draw the reader into the world you’re trying to create. It helps to fasten a concrete image in their heads, which makes the story come to life. [Readers] can breathe the sooty air of London, watch women in colorful dresses parade by and take a moonlight carriage ride with Sherlock Holmes.”

A native of Miami, Nene lived throughout the southeastern US, and even New York City, but always identified as a “Southern girl.” After posting her early work online, she encountered an avid fan, Corrie Kuipers, from the Netherlands. Hundreds of emails and a hefty long-distance phone bill later, Corrie came to the US for a visit. True love happened, and Nene followed her home. The year was 1998, three years before the Netherlands became the first country in the world to allow same-sex marriage.

Unable to meet the financial requirements for sponsorship and immigration, Nene and Corrie chose to live under the radar, terrified the discovery of Nene’s residence status would result in her being sent back to the US with no means to return. That choice proved dangerous in 2010 when, after injuring her foot and struggling to help it heal, she put off seeing a doctor because she had neither insurance nor money to pay. In a do-or-die moment, she threw herself on the mercy of the Dutch government and presented herself for treatment. It was too late to save her leg, but finally she could live without looking over her shoulder.

The last few years were a struggle for Nene—she loathed hospitals—but she never stopped researching, exploring new ideas and writing. She knocked off her first Golden Crown Award in 2010 for Barking at the Moon, the same year she wrote Flowers of Edo: A Ghost Story, a Lammy finalist. Her second Goldie came just last summer for The Consequence of Murder. In 2012, she was honored with a Lifetime Achievement Award at the Royal Academy of Bards, a web community for Xena fanfiction. Her recent work, including the just-released Sweet, is available from Bella Books:

I write to entertain—that’s all. My writings may contain moral or social issues, but that’s not the be-all, end-all. The only consistent theme throughout has been the concept of ‘soulmates’. I believe in soulmates; my partner Corrie is mine, and neither one of us have any doubt about that.

Nene died October 3, 2015 at her home in Sneek, The Netherlands, at the age of 48. In addition to her beloved Corrie, she leaves behind her handsome cat, Mr. Man, a circle of dear friends and colleagues, and thousands of readers who will miss her wonderful work.

KG MacGregor, President of the Board of Trustees, Lambda Literary