‘Hunger Makes Me A Modern Girl’ by Carrie Brownstein

‘Hunger Makes Me A Modern Girl’ by Carrie Brownstein 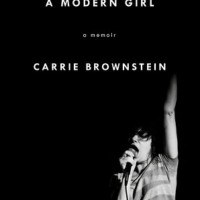 The memoir opens with a scene from Sleater Kinney’s penultimate tour, before the band made an abrupt farewell in 2006. Sick with shingles, unhinged by anxiety, in one scene, Brownstein lets us into the carefully guarded world of Sleater Kinney. From there, she illustrates her childhood in the Pacific Northwest, with pitch perfect details to create an excellent portrait of a suburban coming of age. (“Smoking for me meant blowing outward like you would on a kazoo,” she writes.) She shares that her mother left the family when Brownstein was fourteen, and that later her own father would come out to her as gay, and yet every memory is scrubbed of self-pity or sentimentality.  Instead, it shines with compassionate insight about the exact dysfunctional and darkly funny family you’d expect to produce Brownstein.

It’s also a joy to read Brownstein’s reflection on the alchemy of the Pacific Northwest music scene in the early 90s. “Bikini Kill’s music really gave a form, a home, and a physicality to my teenage turmoil,” she writes. “I still see music as an act of defiance as much as it is an act of celebration. I still don’t understand how you can play a show, or create any kind of work or performance, without raising the stakes relatively high, or with no stakes at all.” It’s during this riot grrrl hey-day that Brownstein first befriends Corin Tucker of Heavens to Betsy. Watching their relationship evolve as musicians, and seeing Sleater Kinney come to life makes for a measured, earnest and forthright story. Her timing as a storyteller is precise, revealing truths throughout the memoir to maximize each truth’s weight.

As the memoir continues, album by album, Brownstein weaves in the more vulnerable stories, such as staying with her estranged mother when the band gets snowed in, and the devastation of being outed in Spin Magazine before she’d come out herself. By far, a success of the memoir is the room with which Brownstein gives herself to show queerness as a nuanced part of one’s identity. She treats her relationship with Corin Tucker, and its influence on their songwriting post-relationship, with immense compassion. Later, one of the most intimate moments in the memoir is when Brownstein effortlessly slips into second person to describe how the grueling nature of touring can corrode a relationship.

There’s a beautiful balance of the uglier parts of being human and in a band (Brownstein and drummer Janet Weiss at one point ban Corin Tucker’s boyfriend from coming to shows), along with the rollicking fun memories, like touring with the Gossip, or Brownstein’s long standing friendship with Miranda July. Fans will be rewarded with quirky details, like that the clanking in “Heart Factory” is Janet Weiss drumming on a space heater and how the iconic Carrie Brownstein leg kick came to be. There’s also the incredible industry commentary that Brownstein weaves into the narrative, including a sampler of the misogynist language used in the press to describe a band of three female musicians.

Brownstein and her bandmates are so committed to Sleater Kinney, to its evolution and its potential, that the memoir rises as their albums progress, and Sleater Kinney’s talent is lovingly recreated on the page, from the technical to the personal. But aside from the tenderness, the realities of anxiety and other pressures come to a crescendo, as Brownstein shows the personal combustions behind the end of Sleater Kinney. The narrative returns full circle to the prologue’s backstage scene of shingles and exhaustion, and the night that brings the band to its abrupt stop is revealed. What follows is a heartbreaking chapter on grief, where Brownstein recalibrates her life to include volunteering at an animal shelter, and experiences unthinkable loss. She’s shared so much throughout the memoir that when its natural conclusion, the reunion of Sleater Kinney, comes about, it’s hard to read it without grinning. Brownstein has written an absolute love letter to music, a gift to Sleater Kinney fans, and above all, an expertly crafted memoir.

'Into?' by North Morgan
'Hard at Work' by Brad Saunders
'The King of the Badgers' by Philip Hensher