Carrie Brownstein on the Joys and Agonies of Storytelling

Carrie Brownstein on the Joys and Agonies of Storytelling 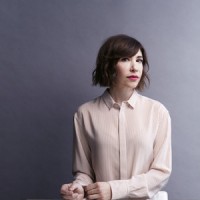 “Music writing can be very frustrating, too, but for some reason, at the end of three hours of trying to write a song, if I’m unsuccessful, it doesn’t feel quite as degrading as not being able to write a successful paragraph.”

To call Carrie Brownstein creative is an understatement. Known for her Portlandia comedy, role in Transparent, and legendary musicianship in Sleater Kinney, Brownstein can now add memoirist to her list of accolades. Hunger Makes Me a Modern Girl (Riverhead) is an exceptional debut, mixing sharp storytelling with wit and heart to illustrate her journey from precocious teen girl in the suburbs to finding her place in the world. A story of “creativity and belonging,” her generous memoir shares how one of today’s greatest musicians and creators came into her own.

Brownstein took time to chat with Lambda Literary about her writing rituals, the influence of James Baldwin, and how her loved ones responded to this intimate memoir.

I remember when you concluded your Monitor Mix blog back in 2010, and you referenced working on a book. Was this that book?

No, that book was imagined much more analogously to Monitor Mix. Much more cultural criticism, less of myself in the narrative. I scrapped that about a year in because I felt like what people related to most in the Monitor Mix blog, and were drawn to, was when I inserted myself the story. So I wanted to go back and retool it as a memoir. I started this book about three years ago, and worked for it on and off.

One of the things I loved was that queerness is such a nuanced part of this memoir. How did you approach balancing identity with storytelling?

Well, the storytelling came first. The structure, the chronology, the suspense, all of that was primary and intentional. But identity was part of the story—many facets of identity. I wanted interweave that into the narrative and I think at some point I went back in a later draft to make sure that there was a journey. It was deliberate but the story came first.

Were there aspects of this memoir that were more challenging to create than others?

To me, the structure was the most difficult part because I’ve never written anything long form before. I’ve written screenplays, I’ve written songs, and I’ve written essays. It was challenging to find a way to cohere these vignettes—the elements of my life that I felt lead up to and served the story of creativity and belonging, and visibility versus invisibility. Figuring out what those were, which ones belonged, which ones felt extraneous, and then putting them into an order that had momentum, that kept the reader interested, where the pacing was good, that was literally the most difficult part. I didn’t write it chronologically, so at a certain point I had to amass the architecture of it and sort of assemble it. Any time I looked at it holistically, I was overwhelmed, so I really had to be detail oriented. That’s what editors are good for–taking the pieces and putting them together.

Were there memoirists or essayists who influenced you while working on the memoir?

I read Steve Martin’s Born Standing Up and I liked how it was about his journey right up until Saturday Night Live. It’s almost like he takes you right up to the moment when he walks on the stage and the lights come on, and it’s like, yes, that’s the Steve Martin we know. It’s like he takes you through the corridors leading up to that moment. I wanted to emulate that. That was the most influential thing structure wise. I read Patti Smith’s Just Kids. I was still writing when Kim Gordon’s Girl In a Band came out. I always go back and look at James Baldwin for the way that he seamlessly has a polemical discussion that’s blended with the personal.

I went back and looked at Jill Ker Conway’s The Road from Coorain and Maxine Hong Kingston’s The Woman Warrior—these memoirs that I’d read earlier in my life. With Maxine Hong Kingston’s [book]—it’s creative nonfiction, but there’s so much symbolism and allusion. It’s not a diary. You want to keep in mind that it’s an elevated form and to keep it about story and narrative, which is hard when it’s your own life. Because everything seems important. [Laughs] But not everything is important. What serves the arc? What serves the themes?

The act of writing a memoir, or writing nonfiction, is a solo endeavor. There is an isolation to it, and a ritual to it, that differentiates it from anything collaborative. You are immediately your own worst enemy every day. You wake up in conflict with yourself, and hopefully, your writer self wins. [Laughs] The author in you wins, and you sit down to write. That battle—it can be very corrosive, because if you don’t write, you feel guilty. With music, there are more intermittent moments of elation and satisfaction. Because you can fill the air with something. You can fill the room with something that is palpable. It can be flimsy, but it exists, and the act of playing can be fun and rewarding. The act of writing—there’s not a lot of joy in the physical mechanics of placing your fingers on a keyboard. [Laughs] It can be very frustrating.

Music writing can be very frustrating, too, but for some reason, at the end of three hours of trying to write a song, if I’m unsuccessful, it doesn’t feel quite as degrading as not being able to write a successful paragraph. It’s also shocking to spend hours on something and realize that you’ve come with three good sentences.

It’s so good to hear this, because so many of the writers I know struggle with that kind of self-doubt and self-defeat. Did you have any rituals or anything you learned that could help you move around that?

I had to get up and write. I literally could not insert another activity, aside from perfunctory and quotidian things. I got up, I showered, I made coffee and breakfast, and I wrote. Those were the only things I could insert between waking up and writing. Otherwise my brain went down pathways that were just procrastination masquerading as utility. All I had to do was click on the document! The ease of that is overwhelming, but there would be days when I just never clicked on the document. So I found that if I did anything aside from sit down and write, if I looked at e-mail or read the news, then it became circuitous and I was done.

Was there anything that surprised you while writing this?

Aside from the sheer difficulty of it, the editing process was very interesting. There was very little that remained from a first draft. I thought that was surprising. There is a process that I suppose some people would call purging, or some people would describe it as throwing words on a wall; it’s very expressionistic and very clunky. And you think, because there’s momentum, that the momentum is cohering into structure. But it’s often not. It’s not coalescing into anything worthwhile. So I was really surprised at just how much retooling, rewriting and finessing it takes. That a first draft really can be garbage. [Laughs] It really can constitute unworthiness and something completely disposable. But it’s not disposable, or it’s not worthless in the sense that you’re laying a foundation, you’re putting on a primer. And then you can kind of dig through this pile of words on a page and realize, okay, there is an idea here. Now I will start assembling it correctly.

What was it like putting the memoir out into the world? It’s such a personal and generous story. The reactions from family, from loved ones, from Janet and Corin—what has that reception been like?

It’s been a very warm reception, which has made me grateful and very happy. You never know, because especially when you’re telling a story that involves other people. I was very deliberate in acknowledging that this was not the definitive Sleater Kinney memoir, nor do I think one could ever exist. I wanted to preserve, obviously, a working relationship with all of these people. [Laughs] There is a kindness that was purposeful, and it some ways it feels like a love letter to them and to the band and to music. And that was very intentional. The response from friends and family has been warm, and that makes me happy.