‘Prayer of the Handmaiden’ by Merry Shannon

‘Prayer of the Handmaiden’ by Merry Shannon 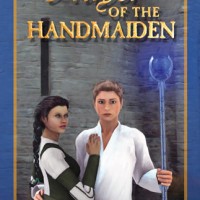 It’s been awhile since we’ve been to Ithyris. Book One in the Legends of Ithyria series (The Sword of the Guardian) was released in 2006. Much to this critic’s delight, the second book, Prayer of the Handmaiden gives us the continuing story of the women of Ithyris and their Goddess.

It’s been a thousand years since Ithyris, the Goddess of the Spirit, has called for a shaa’din, a warrior priestess who will combat the conflict already brewing on the borderlands. Some people would find it hard to believe that one so flawed and angst-ridden as the young priestess, Kadrian (Kade) Crossis, would be her choice; but who can question the workings of a Goddess?

One who might just be bold enough is the fiery, yet anguished, Erinda, a palace servant, friend and confidant of Queen Shasta, the young ruler of Ithyris. Erinda was Kade’s childhood friend. As the tale unfolds, we learn of the love Erinda has for Kade, a love that developed into something more than friendship before Kade left to serve in the Temple. In the seven years since Kade vowed herself to Ithyris, Erinda has been unsuccessful in letting go of  her feelings for Kade, and it has taken its toll on her.

Kade, for her part, struggles to live out her vows and is grateful that at least as priestess of the Temple, she is set apart from the citizenry of Ithyris, including Erinda. However, one particular unexpected encounter from the past continues to haunt Kade, making the fight all the more difficult.

Then, the Goddess comes calling and Kade, the reluctant shaa’din-elect, accepts with some trepidation. What follows is the story of a journey these two women must make to find reconciliation, a journey of body and spirit. Each must find her way—and in the end, the ties that binds them is their salvation—if they can only yield to Ithyris’ will.

As Kade’s inner struggle continues, the new shaa’din must engage in the fight of her life against a woman who can almost be considered the anti-shaa’din. Sent by Ulrike, the God of the Flesh and Ithyris’ brother, Ulrike has endowed his own shaa’din with powers that seem to go beyond those of the Goddess. (Reader beware: there are some difficult descriptive scenes in this story.) And while Kade and the powers of darkness do battle, the Daughters of Ithyris support the shaa’din with prayer and light.

Amid all these struggles, there are characters and subplots skillfully threaded through the story to enhance it even more. Queen Shasta’s lover, Talon, has gone off to join the battle, leaving the Queen alone and beleaguered without Talon’s support. However, Talon proves to be a great ally for Kade as she walks deeper into the conflict.

Then there is the delightful, challenging character named Myka, an effervescent young “Pledged”, who finds the Quest and serving the shaa’din more attractive than praying in the Temple all day. More than once Myka’s special talents and worldly wisdom save Kade from her own undoing. Myka complements Kade, keeping hold on reality for the shaa’din, who often has her head above the clouds. This young Pledged shows commitment and loyalty to a fault and at times is the comic relief for the tension in the story.

In this epic struggle between darkness and light, flesh against spirit, there are undercurrents of new lessons—and questions. Could it be that darkness was never meant to overcome the light? And the Goddess has a lesson of her own to learn. She also has a surprising message for her shaa’din. Ithyris’ lessons may even extend across the Dangar border to the people of the flesh, and it may be that the unexpected ending will allow for the continuation of the story, enabling those lessons to take hold.