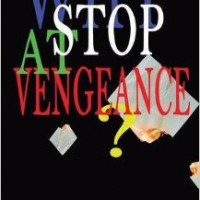 Richard Stevenson (Richard Lipez) has tackled a variety of social issues in his mysteries over the years. His new novel, Why Stop at Vengeance? (MLR Press)–fourteenth in the Albany, NY-based Donald Strachey series–takes on an American evangelical missionary’s anti-gay crusade in Uganda.

A young Ugandan man, John Suruma, attempts to hire Strachey to burn down a local evangelical church, International House of Faith (IHOF), that has funded anti-gay bigotry in Uganda, which led to the death of Suruma’s ex-lover and friend. He wants Strachey, who he calls “the gay Dirty Harry” which is a moniker the detective is not comfortable with, to help him exact his revenge. Strachey is sympathetic to the man’s plight, but wants to find a non-violent solution to neutralizing IHOF and its evil trio of villains the smug and hypocritical Pastor Chip Salisbury, the Ugandan political-climber Pastor Isaac Baba, and the phony psychologist Floyd Lapp. The question is: Can Strachey implement his plan before Suruma, who continues to receive news of hate crimes at home, takes action and murders Salisbury and his cronies and, in doing so, sacrifices himself?

Stevenson’s crisp prose and intricate plotting propel the story forward at a quick pace, making Why Stop at Vengeance? a thoroughly engaging and enjoyable read. He throws light on bigotry abroad and, through the fine-tuned machinery of a thriller plot, shows us how evangelical missionaries can harness political backing and propaganda for their hate-mongering in countries with political and economic instability. He reminds us that, as we make significant progress in LGBTQ rights in our country, we need to turn our attention to anti-gay campaigns and laws in other places in the world.

Several times in the novel, Strachey mentions he read Reza Aslan’s Zealot: The Life and Times of Jesus of Nazareth, a critically acclaimed biography of Jesus. Stevenson has him do this, it seems, to remind the reader that the actual Jesus shouldn’t be confused with the romanticized evangelical Jesus; the evangelical Jesus who, Strachey remarks looks “not at all like an Aramaic-speaking Palestinian Jew but like somebody who knew where to go for a good shampoo and who perhaps spoke Swedish.” It’s true; the iconic Western image of Jesus bears little resemblance to historical truth. Other than mentioning Aslan’s book, however, Strachey seems to have little to say about evangelical Christianity other than its propensity to direct hatred at members of the LGBTQ community. Every Christian character the detective comes across is evil, naive, or a buffoon. I don’t disagree with the overarching message about the duplicity of many Christian evangelicals, but as a reader, I hunger for stereotypes–stereotypes of all kinds–to be challenged. I had hoped to come across a character who straddled the evangelical world and the LGBTQ world in a complicated way, perhaps a Christian character whose faith was authentic, but who was critical of Pastor Chip and IHOF’s evil machinations.

When writers address issues of social injustice in their fiction, it’s usually because they have a message to deliver. Stevenson does in this novel–and it’s an incredibly important message: Look beyond the boundaries of our country and to the harsh inequalities in other corners of the world. However, the challenge comes in balancing the desire to make a point with offering the reader characters whose perspectives don’t neatly align on either side of an issue, but perhaps could be valuable to be heard.

All the Pretty Ones
Poetry Doesn’t Merely Recapitulate Experience, It Creates Experience
'The Bone Bed' by Patricia Cornwell