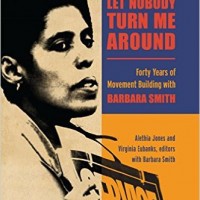 In a time where the battle for Civil Rights mimics the riots and deaths of the 1950s and and beyond, editors Alethia Jones and Virginia Eubanks gathered essays, lectures, and speeches written by Barbara Smith. They created a collection of stories that stress not only the importance of a movement but also its role and influence in larger society and culture as a whole.

Smith’s grassroots activism is key to the success of many movements such as feminism, lesbian and gay liberation, anti-racism, black feminism, and Civil rights; but all too often, her legacy is one that is skirted over or lacks the full emphasis she deserves. Through forging a milieu where issues such a gender, race, class, and sexuality are all merged and interwoven into each other to help build effective collaborations, Smith, through the dedicated work of editors Jones and Eubanks, signifies the early roots of intersectionality that many of today’s movements and activists champion.

One of the most vital aspects of this collection is the attention to detail regarding Smith’s writing and activism that honors the “lives of ordinary Black women.” Often times overlooked for their contribution to movements, the “interviews, writings, and historical documents” present throughout many of the chapters is vital to an accurate portrayal of the important role women, from all walks of life, had in the success of many movements that have helped shape counter cultural movements and mainstream society today.

Through Smith’s social justice work, activists and scholars have been able to learn from her example and create movements and work within existing structural frameworks or create ones of their own that better match their movement’s mission and/or goals. While the book is centered on Smith’s life as an organizer, publisher, scholar, writer, and public service; the main crux of the collection is centered on how new and emerging scholars and activists can utilize Smith’s body of work and movement experience on their own terms.

While Ain’t Gonna let Nobody Turn Me Around has similar qualities to the Roots song that it is titled after, its end pages come too fast.Similar to Smith’s work, readers who finish the book long for a few extra pages and advice from a keen advisor who not only shaped history for the better but also created a world where like minded individuals can feel part of something larger while their “Marchin’ up to freedom land.”