‘Under The Udala Trees’ by Chinelo Okparanta

‘Under The Udala Trees’ by Chinelo Okparanta 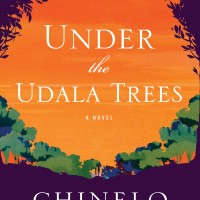 In 2014, Nigeria’s president signed into law a bill criminalizing same sex relations and their supporters. Against this harrowing truth, Chinelo Okparanta has written a new classic of the lesbian novel, timeless in its risk and heart, immediate in its voice for the persecuted LGBT people of Nigeria.

In Under The Udala Trees (Houghton Mifflin Harcourt) Okparanta’s elegant and serious prose give us the story of Ijeoma, a young Nigerian woman coming of age against a backdrop of civil war, religion’s tenets and the allegory of her father’s folktales. Ijeoma’s life is tainted by loss, beginning when her father dies in the dark midst of Nigeria’s civil war. Her mother, depressed and stunned, sends Ijeoma away to live as a housemaid. When she meets the homeless Amina, she convinces her host family to let her stay and work as well. A friendship blossoms between the two young girls, and their sweet intimacy grows, leading to the evening when the grammar school teacher they live with discovers the girls making love. Ijeoma is cast out, back to her mother, who devotes herself to exorcising the demon from Ijeoma. Eight short chapters are devoted to this period, and it becomes a thorough example of how pervasive the Christian faith can influence one’s own identity and coming out.

When Ijeoma is sent away to boarding school, Amina is there as well, and she tries to follow her heart instead of her faith. The heartbreak that follows is expertly drawn, as young Ijeoma pines for Amina, who is now wary of their love. Religion becomes a fallacy, as Ijeoma tries to convince Amina their love is okay in the eyes of God, to no avail. Trapped between the heartbreak of losing Amina and the endless battle with her own faith (the word “abomination” echoes within her), Ijeoma finishes school and returns to work in her mother’s market. Ndidi, a teacher in her mother’s town, befriends Ijeoma, and one lingered hand in an exchange across the counter lets Ijeoma know that she and Ndidi have something in common. Ndidi is a breath of fresh air, kind and affectionate, and she introduces Ijeoma to an underground world of secret lesbian parties held in a disguised church. Okparanta’s choices regarding which dramas to illustrate in scene heighten the seriousness of how lesbians are persecuted in Nigeria, including the harrowing tragedy that skewers Ndidi and Ijeoma’s world. Ndidi encourages Ijeoma to accept the romantic advances of Chibundu, the boy Ijeoma grew up with who returns as an adult to ask her hand in marriage. Ijeoma betrays her heart, accepting Chibundu’s proposal, launching her into a compelling nightmare of domestic life, her true desires stifled. Her letters to Ndidi go unanswered, then unsent. Her pain is assuaged after her daughter is born, but her marriage begins to crumble, until the dramatic crescendo that forces Ijeoma to be true to her own self, despite a family, a country and a culture that abhor her sexuality.

Readers will be reminded of Jeanette Winterson’s debut novel, Oranges Are Not The Only Fruit, which paired a young lesbian’s coming of age with her mother’s stringent religious judgements and abuses. Ijeoma is a narrator who reveals herself as the story develops, strong-willed, witty and unforgettable, especially when pitted against her reprehensible mother. It’s no small feat that a novel so weighed with heartbreak can end in a place of hope for the future.

Navigating Poetry Manuscripts and Failure: A Week in the Life of Poet Elaina Ellis
'Things to Do When You're Goth in the Country' by Chavisa Woods
Read These! Thirteen F/F Romances to Warm Your Heart This Winter