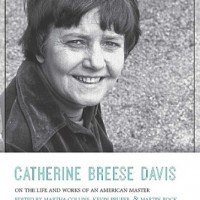 In The Unsung Masters Series, Pleiades Press brings a collection of poems by Catherine Breese Davis to contemporary readers. Davis (1924-2002) studied at the University of Iowa, held a prestigious Stanford poetry fellowship (the forerunner to the Stegner), and was well published in notable poetry journals midcentury. Before receiving this book, I had never heard of her.

I am tempted to note that the erasure of lesbian poets is swift and thorough. I am tempted to use Davis as an example supporting this thesis, and that arrangement of facts may be correct. In the case of Davis, however, from the narrative of her life, her erasure is most likely more complex than I know. Lesbianism is a part of it, yes, but other factors conspire to losing the visibility of her work. Having Davis’ poems restored for contemporary readers through this collection is thus a delight.

Davis’ poems are taut and formal, with close attention to the power of compressed language. Spare diction combined with formal control creates a sense of loneliness and isolation throughout the collection.

For instance, in the first poem, Davis opens, “You know how it is to hold in mind/A place—a house or a river scene—.” The generality of the nouns in the second line allows a reader to evoke her own memories, to connect with her own place. Davis then reminds her reader of the disappointment of discovering that the place was either not as remembered or gone. In the middle of the poem, Davis inserts this devastating couplet, “So it is now with me. What seemed fixed,/My version of it, has come apart.” What seemed fixed, what seemed reliable, what seemed known and trustworthy, has ended, unraveled, disappeared. From generalized disappointment, Davis moves to the more personal, noting that her own sense of a fixed life has come apart. The acknowledgment of her condition and her resignation are captured in the final lines: “Estranged, yet haunted./Nothing to do/But let it go at last. Or try to.”

In that final devastating line, she reveals the knowledge of what must be done, and the human frailty of enacting that knowledge. We know we must let go, but too often, we just can’t.

The sparseness of Davis’ poems and her ability to directly map the complexity of our intimate lives, particularly in the registers of loss, loneliness and disappointment, calls to mind another midcentury lesbian poet. Elizabeth Bishop’s work has a different set of referents from Davis’ work (Bishop’s geography informs her poems, while Davis’ locations are less pronounced), but the emotional terrain is eerily similar. The emotional tenor suggests some sort of shared experience between these two lesbian poets, in spite of Bishop’s reticence about such identity markers.

While I do not know if Bishop and Davis ever met or read one another’s work, the artistic conversation between Davis and Bishop is most evident in their two villanelles. Bishop’s well-known “One Art” schools readers in the art of losing; so does Davis’ “After a Time.” The latter poem begins:

After a time, all losses are the same.
One more thing lost is one less to lose;
And we go stripped at last the way we came.

Though we shall probe, time and again, our shame,
Who lack the wit to keep or to refuse,
After a time, all losses are the same.

So we, who would go raging, will go tame
When what we have we can no longer use:
After a time, all losses are the same;
And we go stripped at last the way we came.

Echoes of Bishop—and, of course, of Dylan Thomas—in Davis’ villanelle on loss position her in conversation with great poets, while the poem itself captures the emotional terrain of loss and the need to prepare oneself for the expected sense of losing. This collection of Davis’ work is filled with poems like this villanelle that will delight and move readers. The collection opens a window to a new lesbian poet for discovery by contemporary readers.

Late in the book is Davis’ dialogue, “Second Thoughts.” This poem is an intimate mediation on mothers and daughters, which resists sentimentality. Davis opens with the line, “My mother used to say: ‘I’ll beat the living Jesus out of you,’” which is followed quickly by the grim admission, “She almost did”—with almost being the key word. Something kept Davis living through anger, violence and loss. Emotional remove is part of Davis’ resilience, and the final three lines of this poem demonstrate the poets remove from her mother’s brutality: “I wrote: Maybe she really didn’t even mean it, after all./I wrote: Maybe I’m just like her, no matter what./I wrote: She gave me life and could not take it back.”

With this new book, editors Collins, Prufer and Rock have given life to Davis’ poems once again. Once read, no one can take them back. No matter what, we can read and take pleasure in what she wrote. She gives us life.