‘Two Augusts in a Row in a Row’ by Shelley Marlow

‘Two Augusts in a Row in a Row’ by Shelley Marlow 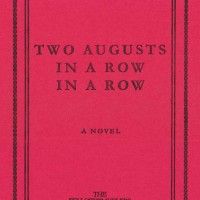 Two Augusts in a Row in a Row is a novel about gender, love, grief and magic. It’s also about the life ingredients that make up a day: the common hum of work, strolls to the corner store for food, the way time collapses while stroking a cat’s fur or watching her sleep. It’s sometimes confounding, but that’s as it should be in a story about illusions.

Phillip is a drag king and student of magic, a singer and stage performer. Living a gender fluid existence has alienated Phillip’s parents who wonder where the daughter they knew as Philomena went and if she’ll ever return. Philip has friends, lovers, a beloved cat, and meets people in the art and film worlds through his job translating the memoirs of an old movie star. He meets and falls for a woman through an internet chat site. Then losses begin to accrue: the attacks on 9/11, the death of his cat, and finally his father’s illness.

Author Shelley Marlow writes with a fluid quality that pulls the reader through these events and passages, twining the workaday and the trippy together. Phillip’s internet crush Magi writes an advice column called “Best Witches” that occasionally appears in the guise of a chapter; when he gets sick, Faye (the cat) contributes a chapter as well, only to have Magi use some of the material therein in her next column. If it sounds a bit crazy, to read it is to be pulled past on a moving walkway, a strange and enjoyable voyeurism.

Gender floats in and out of focus. At a film screening, Phillip describes a friend “dressed in a black suit and pink silk shirt, a bow in her straight white bob, and full face makeup. Magi and I, in comparison,,,are underdressed…, and I have no makeup or sideburns on to make me look male or female. We don’t mean to, but Magi and I often dress the same. Together, we make a third person.”

Some of the off-stage magic in the story echoes Sara Gran‘s twisted noir Claire DeWitt mysteries, where finding out whodunit takes a back seat to conferring with fakirs and throwing the I Ching to determine one’s next move. Phillip gets laid off after 9/11, but Magi has an opportunity to go to Italy and they go together. News of Saul’s illness brings Phillip home to something approaching reconciliation, eked out despite the frustrations and complexities of caregiving. He considers beginning to take testosterone. Magi comes to lend support. Old connections reappear and disappear in flourishes of coincidence.

The humor in the story has a surreal streak. Connecting with the Cliterati online chat group to support one another emotionally after the Twin Towers fell, they agree to a meetup in a Brooklyn nightclub where they’ll all be “packing,” only to be busted by police; FBI surveillance of their chat room led to a tip-off about a group of women carrying pink and purple guns. The comic visual of a strip-search that includes an officer bending and twisting a dildo to be sure it’s not full of C-4 layers uncomfortably over the fear of arrest, detention, and the unknown that all hang in the balance. Everyone knows it’s funny and absurd, but nobody’s laughing.

By story’s end, Phillip has experienced significant loss, but seems both wise and hopeful, if also flanked by ghosts. Two Augusts in a Row in a Row makes a strong case for love in the face of all as the truest magic this life has to offer.

'Autogeography' by Reginald Harris
‘When Katie Met Cassidy’ by Camille Perri
‘The Smuggler, The Spy and The Spider’ by Diana Rivers