‘The Ghost Network’ by Catie Disabato

‘The Ghost Network’ by Catie Disabato 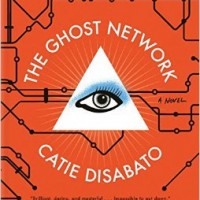 The Ghost Network is a mystery, though less a whodunit than a philosophical koan. It’s a layered and twisted trip through the real and fictional, pop and political, that sparks brightly when those worlds intersect. Many readers will enjoy it, but a certain subset of them will feel, as fans do with popular music, as if it was created solely for them to wrestle with and puzzle out.

Author Catie Disabato is herself a “fictional” character in the story, annotating and footnoting the manuscript she inherited from Cyrus Archer, a journalist who is thought to have died while investigating the disappearance of global pop phenom Molly Metropolis. Metro, as fans call her, is a biracial singer whose rise to prominence is Gaga-esque–think Mother Monster with an urban planning fetish. She’s quietly obsessed with France’s Situationist International movement and a revival that took place in the U.S., hoping to make her access to the world’s eyes and ears count for something. When she vanishes in the midst of touring, it’s unclear whether it’s a publicity stunt, foul play or something else entirely.

The Ghost Network folds fiction into history so seamlessly, when a Facebook page listed in a footnote leads to a dead end it feels more plausible that the page was removed to cover Metro’s trail than that it simply never existed to begin with. Archer follows Molly’s trail through the people she knew and worked with, and uncovers a work of conceptual art she’s been obsessively creating: A map of the Chicago train system that incorporates all the lines that ever existed as well as those that were proposed but never built. It’s very much work in the Situationist vein–a cursory web search of the term reveals numerous maps, along with that Jersey Shore guy with the abs–but it may contain key information about her disappearance as well. Gina Nix and Caitlin Taer are part of the search, but the couple undermine one another’s, and Archer’s, efforts in critical ways. People die (or seem to) and are injured in the effort; it may be surreal, but the stakes are still high.

Discussions of the history of cartography and of Guy Debord, the Situationists’ best-known proponent, have a dual effect, feeling like dreamy digressions while at the same time expanding the web these characters are tangled in and ratcheting up our concern for them. What good is a conspiracy if it doesn’t go all the way to an indeterminate top? That Britney, Miley and Madonna are heard playing in the background here gives Metro added realism. As a label exec pressures her to stop wearing wigs and go natural, her insistence on the right to “perform her own hair” sounds just ridiculous enough to ring true.

Fans of Douglas Coupland and Scarlett Thomas will love the world behind the one we know that Disabato builds on the back of a pop star, and the sense that it could be so much bigger if everyone’s curiosity wasn’t sandbagged by ennui; many an effort to find Molly devolves into a night of booze and cigarettes while searching the web for clues. The story’s resolution, the tiny doll nested inside all the others, makes sense of some things while also opening a world of questions. This isn’t a bad thing; you’re likely to set the book down envisioning a sequel of your own design, or flipping through an atlas to guess at what’s really going on behind the maps. The Ghost Network finds signs of life in unexpected places.

'Names' by Marilyn Hacker
‘They May Not Mean To, But They Do’ by Cathleen Schine
‘Pretend I’m Your Friend’ by MB Caschetta