‘It Starts with Trouble: William Goyen and the Life of Writing’ by Clark Davis

‘It Starts with Trouble: William Goyen and the Life of Writing’ by Clark Davis 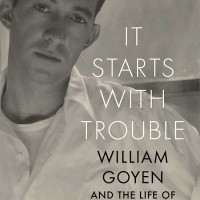 During his lifetime, William Goyen’s fiction elicited praise from the likes of Joyce Carol Oates and Truman Capote. He published five novels, several collections of short stories, a book of poems, and a respectable—if not abundant—body of nonfiction. He saw his first novel, The House of Breath, translated into French and German, and had a couple of stints in theater writing plays. After he married and had a wife and stepchild to support, he worked at McGraw Hill as an editor, a job he was apparently good at, as he championed and developed his authors. Since his death in 1982, Goyen’s own life and work have been championed by his literary executor, the poet Reginald Gibbons, and by literary journals such as TriQuarterly.

Why then, you might ask, have most people never heard of him? The answer is complicated and involves issues outside of Goyen’s control, big issues like the phobias surrounding sex and sexuality in literature and society. (The title of Goyen’s second novel, Come The Restorer, uses the word “come” in both the usual and sexual senses.) His less-than-stellar reputation also has a lot to do with the big issue of literary tastes, particularly those that dominated over the years Goyen was writing—tastes that tended to favor realism over Goyen’s modernist, stream-of-consciousness soliloquies. However, Goyen’s hypersensitive—and perhaps innate—resistance to criticism and community, and his belief that he was both an outcast and a savior, appears as the greatest contributor to his diminished literary standing. The result is that, for many readers, Goyen is too rich a cup of tea. (One reviewer said The House of Breath relied too heavily on “linguistic pyrotechnics.”) For still many others, I would venture that Goyen is an acquired taste, and that, following those two categories, there is a minority of readers who view Goyen’s work as a godsend. Probably everyone, no matter which category they fall into, would describe Goyen as “a writer’s writer”—whatever that means.

Clark Davis, the author of It Starts with Trouble: William Goyen and the Life of Writing (University of  Texas Press), clearly admires Goyen’s work. So if your tastes agree with Davis’, you’ll like Trouble, partly because the book is in large part a study of Goyen’s works. Yet, even if you don’t like reading him, you may still like Trouble, because the book is, in its other large part, a biography of Goyen—a troubled man born in Trinity, Texas in 1915. Indeed, Davis locates the title for this biography in an interview Goyen gave TriQuarterly in 1982. When the interviewer asked, “What starts you writing?” Goyen responded, “It starts with trouble. You don’t think it starts with peace, do you?”

Trinity was an East Texas small town that relied heavily upon the technologically doomed lumber industry. In this aptly, or perhaps ironically, named place, Goyen saw black men being tarred and feathered by the local and ever-present Klu Klux Klan. Nevertheless, as Davis relates, he felt deeply nostalgic about Trinity all his life. Trinity and Trinity-like places are familiar settings in his fiction. Trinity-related trauma aside, he was from the start “an isolated, emotional, and even strange child”—a thin handsome boy who grew up in a strange land of religious revival tents, churchgoing, strong family ties and the Klan. As he grew, “emotional fragility” would continue to be his “defining characteristic.” To that, you might add the ongoing conflict with his family surrounding his artistic leanings and, of course, his ambiguous sexuality. He made his getaway from his suffocating home life after the outbreak of World War II, during which he served as a midshipman in the Navy.

Goyen struggled with his sexuality perhaps even more than he struggled with his homo- or bisexuality. He was an alcoholic who found freedom from drink, if not freedom from his demons, in AA. Yet, despite his nature, and despite the nature of the disease of alcoholism, he did manage a ten-year relationship with a man—the painter Joseph Glasco. The British writer Stephen Spender had a crush on Goyen, and while living an otherwise isolated life in Taos, New Mexico, Goyen developed a strong kinship with D.H. Lawrence’s wife, Frieda. His friendship with Katherine Anne Porter, on the other hand, ended disastrously after the two flirted with romance. Rather late in life, Goyen married Doris Roberts, the prolific actress who would star on Everybody Loves Raymond. This marriage may seem like another manifestation of Goyen’s hangups, yet Roberts, who also long suffered alcoholic behaviors, remained with him till death did them part.

About all the above, Davis is direct, but circumspect, wanting to avoid “the conceit of exhaustiveness” and following his own philosophy that “While all biography intends to give shape and wholeness to the welter of facts that constitute personal history, there is something to be said for reminding ourselves of the brokenness of individual experience, particularly for a writer who saw the fragment as a fundamental feature of reality.” This quote from Trouble—in addition to scholarly circumspection—displays how well Davis understands Goyen’s enterprise. That understanding is repeated brilliantly throughout the biography; Davis refers to Goyen’s works, for instance, as a “combination of folk storytelling and lyric intensity,” as a “wedding of myth and aria.” Elsewhere, Davis aptly describes The House of Breath as a “ʻnovel’” that “often feels like a long poem,” pointing out Goyen’s frequent use of alliteration, repetition, and off- and near-rhymes. More saliently, he writes, “Goyen was not a realist, but what many readers failed to understand was that he eschewed not only the stylistic trappings of realism but also its fundamental mimetic theories. He consciously rejected the tenet that the modern, self-aware writer should hide all trace of himself to let the characters and represented world live independently. Instead he sought what he called the ‘living voice,’ the immediate, at times desperate, presence of an emotionally charged self.”

Davis concedes that Goyen’s method of writing fragments when memory and the moment struck him and then later trying to patchwork those pieces into a whole more than often led to challenging, unconventionally structured narratives. However, he never fully states how Goyen’s method could and did also lead to loose and sloppy writing—to a method that was so concerned with emotional immediacy that it often forgot to check and sufficiently edit itself. But no matter. By writing a biography that focuses on an author’s work as much as it focuses on his drama-filled biography, Davis has successfully avoided writing a sensationalistic book. As an added benefit, he has avoided speculating about the unknown facts of the life of a man who was “often sharply protective of his personal information,” who “worked very hard to maintain control of his image.”

'The Lunatic, the Lover, and the Poet' by Myrlin A. Hermes
‘The Narrow Door: A Memoir of Friendship’ by Paul Lisicky
Philip Clark on Unearthing the Poetry of Donald Britton