Maggie Nelson: On Writing ‘The Argonauts’ and Doing Justice to Queer Happiness

Maggie Nelson: On Writing ‘The Argonauts’ and Doing Justice to Queer Happiness 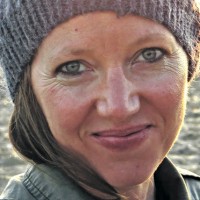 “On one level, I tried to do something I hadn’t done before, which was use the book as a holding container for sentiments of love and happiness […]”

Maggie Nelson comes across as a writer charmingly bored by orthodoxies of all kinds—even the radical ones, even the queer ones. Aside from their general tendency to constrict, there’s this glaring oversight: they’ve largely failed to acknowledge any overlap between the categories of queer and mother.

With The Argonauts (Graywolf Press, May 2105), Nelson populates this gap, adding to an oeuvre that ranges from poetry to critical works including The Art of Cruelty. Her latest not-quite-categorizable book combines a wealth of big ideas with her own experience being seen as “that wild oxymoron, the pregnant woman who thinks.”

Nelson’s partner in family-making, the fluidly gendered artist Harry Dodge, is also the book’s addressee, and readers eavesdrop on a wide-ranging but intimate conversation. Via email, she expanded that conversation to touch on the noise of modern parenting and the fruits of ignoring a certain oft-cited Joan Didion quote.

Parts of this book began as pieces originally designed for other purposes—notes on an A.L. Steiner installation, a talk in honor of Eve Kosofsky Sedgwick. When did you sense that they were forming a larger whole?

I think, in both of those instances, I was kind of forcing myself to do some occasional writing, as I usually prefer to work on book-length projects to the exclusion of other opportunities. So it was exciting to realize that the pieces might all fit together in one book—not just aesthetically exciting, but also politically so, i.e., to realize that a meditation on babies or caretaking might find a place in a longer meditation on gender and sexuality, and vice versa. I mean, Duh, one might say, but there are some impediments to making those connections, some of which come from outside queer thought/culture and some of which come from within, so it took a certain personal audacity to demand that everything belonged in one place, together.

One thing I loved about the book was its breezy style of citation, the names looking on from the margins like guiding spirits. Although there are plenty of critical theorists among them, it never felt necessary that the reader approach from an academic background. What kind of audience did you have in mind?

You know, I never think about audience when I’m writing. There may be moments at which I say to myself, oops, that’s a lot of “theory”; there goes the phantom “general public” audience, or others at which I say, oops, that’s pretty simply or autobiographically stated; there goes the sophisticated “high theory” crowd, but I never change what I’m doing based on those moments. That said, I was very pleased when Graywolf wanted to take this book on, with nary a disciplinary word about all the citations! Not many places would be as brave.

Among the many kinds of reading and art that saturate the book, you mention some ambivalence toward fiction—that it can promise “to provide occasions for thinking through complex issues, but really it has predetermined the positions, stuffed a narrative full of false choices, and hooked you on them, rendering you less able to see out, to get out.” Do you see the goal of art in general as supplying occasions for thinking through complex issues? Do you think fiction ever can be compatible with the kind of project you’re embarked on here, of cultivating openness by demolishing false choices?

Oh yes. Fiction can be utterly compatible with the kind of project I’ve embarked on here—in fact, good fiction is expert at demolishing false choices. I think I was just performatively beating a dead horse at that moment, one that I actually beat a little harder in my book The Red Parts—I can get into a very anti-narrative mood. But it’s more of a mood than a fixed conviction. 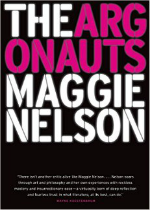 In fact, The Argonauts itself cites numerous fictional works that contradict what I’m saying in that passage: Beckett’s great Molloy appears in the book’s first paragraph, and Beckett’s own contributions to the discourse about the sayable/unsayable is one of the book’s abiding inspirations; other fiction writers who appear in its pages include Alice Munro, Dodie Bellamy, Gertrude Stein, Leonard Michaels, Freud (just kidding) . . . Anyway, I learn from and love good fiction, but I deplore clichés about how “we tell ourselves stories in order to live.” Personally I find it more fruitful to take up the Buddhist instruction, “Drop the storyline,” and take things from there.

At one point, while discussing queer anticapitalist movements, you say: “I’ve never been able to answer to comrade.” But you also note that if queer people “want to do more than claw our way into repressive structures, we have our work cut out for us”—I’m wondering how that hard work gets done, for people (and I count myself among them) who cannot answer easily to comrade.

A very good question indeed. Comrade is a militaristic term—maybe not in a denotative sense, but certainly in a connotative sense, which is why leftists understandably use it to indicate that we’re in a struggle. And certainly we are in a struggle here, to claim and reclaim our planet and our bodily integrity and our spirits from forces that would gladly crush them on their way to short-sighted and self-centered enrichment.

But, as Fred Moten and Stefano Harney have so eloquently stated in the undercommons, to focus exclusively on the question “What do we not have that we need?” (the question of struggle) at times decenters a more primary question, one that should probably be posed and considered first, which is “What do we have that we want to keep?” The latter focuses on what we’re already doing, what we already have, what we already know, what we’re already practicing among us, what already feels good, what’s already going on.

I don’t see a lot of use for “comrade” in this latter arena. I won’t offer any replacement term, but I will say that another question posed by Moten and Harney which was on my mind a lot as I wrote The Argonauts was “Without calling something to order, how can you still sing?” Given the importance of all three of these questions to my book, it’s no accident that I ended the book on the word song, in part to pay homage to that sentiment.

You mention that there seems to be a recent resurgence of interest in Donald Winnicott’s writing on childhood development—of course, he figured heavily in Alison Bechdel’s Are You My Mother? as well. Any theories about why he’s lately in vogue?

Winnicott was unusual for his times in that he took strangely special care not to write in heterosexist terms about childbearing, rearing, and caretaking. So while he writes a lot about mothering and “good enough” mothering, he also takes care to say that while it’s most often mothers performing the activities of ordinary devotion, it isn’t always, or need not be necessarily. There’s something really quietly radical and instructive about the way he can address particularly gendered scenarios like breastfeeding in detail, while also holding open these spaces for other-gendered parenting.

I also think the “good enough” mothering idea is a sanity-producing antidote to all the noise in our culture about parenting styles, etc. He’s not focusing on how many violin lessons your kid should have per week or at what age they should have access to Instagram; he was dealing with children who had been evacuated from their homes and separated from their families by World War II, and asking questions about what kinds of holding environments might be “good enough” when the original holding environment had been broken. He offers common wisdom, unexpected and deep theoretical provocations, and compassionate soul.

In the midst of a conversation with Harry, you say you’re writing the book partly because you “do not yet understand the relationship between writing and happiness, or writing and holding.” One possible reading of the book would be as an embodiment of those relationships—that is, that you’ve sort of won the opening section’s argument about whether or not words ruin things like happiness and holding. Do you see it that way, or are these questions as open as they ever were?

Oh I love this idea—that by writing the book, I got the last word and thereby win the argument! That’s funny (though I’m not sure if Harry would think it so!). I think, in some ways, I’m more convinced now of two contradictory ideas on this account. On one level, I tried to do something I hadn’t done before, which was use the book as a holding container for sentiments of love and happiness, maybe even honor, to use a word at issue in the book. To whatever extent the book succeeds, I succeeded, and that makes me happy. Because I believe writing can give profound gifts, as much as it can wound or fail or betray or take away.

On the other hand, it’s abundantly clear to me that life and love far exceed whatever 160 pages, or 100,000 pages, can communicate. There’s much to argue over re: Karl Ove Knausgaard, but something he said in a recent interview was very clarifying for me: the interviewer asked him how his autobiographical project had affected his marriage, and he said, “Mentioning things doesn’t change anything, doesn’t help anything, it’s just words. There is something much more deep and profound to a relationship than that. Revealing stories and quarrels—that’s just words. Love, that’s something else.” And so it is.

Saleem Haddad: On the Arab Spring and Writing About the Queer Arab Experience
'Love Not Given Lightly: Profiles from the Edge of Sex' by Tina Horn
'A Light That Never Goes Out: The Enduring Saga of the Smiths' by Tony Fletcher