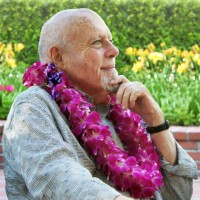 Malcolm Boyd, a noted gay spiritual leader, activist and writer, has died. Boyd, 91, died of complications due to pneumonia on February 27, 2015, in Los Angeles, California.

Boyd first came to great renown in the 1960s as an ordained Episcopal priest who delivered unrestrained theatrical sermons that candidly grappled with social issues.

From The Los Angeles Times:

Boyd delivered riffs on life’s grittier problems — the white racists afraid of integration, or teenage girls who get pregnant — with a candor that was rarely heard from a priest leading a community at prayer.

He wrote more than two dozen books, many of them about people who did not fit the blue-sky ideal. But none of his prayers for them were as raw and urgent as those in the 1965 collection that sold half a million copies.

“‘Are You Running With Me, Jesus?’ is a classic of spiritual writing for its generation,” said the Rev. Robert Raines, a former director of the Kirkridge Retreat Center in Bangor, Pa. “It tells about the underbelly of society, which Malcolm knew something about. His was a Christian faith lived out in bars and on the streets. His prayers came out of the realization that God is not only in church. God is in the painful situations of your life,” Raines said in a 2004 interview with The Times.

“This girl got pregnant, Lord, and she isn’t married,” one prayer in the book begins. “There was this guy, you see, and she had a little too much to drink. It sounds so stupid, but the loneliness was real. Where were her parents in all this? It’s hard to know.”

Boyd’s flair for drama kept him in the spotlight from his earliest years as a clergyman. In the segregated South of 1961 he was among the first white ministers to work the voter registration drives. Later in the decade, when religious institutions were criticized as self-serving or irrelevant, he delivered his “prayer poems” from nightclub stages and at the Newport Jazz Festival with guitarist Charlie Byrd.

But he took his boldest step in 1976, when he announced that he was gay. At the time, most Christian churches condemned what they referred to as the homosexual lifestyle, which he was living.

In addition to his work as a social justice advocate and spiritual leader, Boyd was a well-respected author. One of his books included the groundbreaking Take Off the Masks, written in 1978, in which Boyd openly addressed the hardships of being an out, Episcopal priest. In 2013, Boyd was honored by Lambda Literary at  OUTWRITE!, an event spotlighting Los Angeles LGBT literary pioneers.

Love, Crank, and Complexity: Queer Writers on Gay Marriage, Black Cool, and the Staying Power of Sex...
Dear Twin by Addie Tsai
'Love Not Given Lightly: Profiles from the Edge of Sex' by Tina Horn