‘Lies We Tell Ourselves’ by Robin Talley

‘Lies We Tell Ourselves’ by Robin Talley 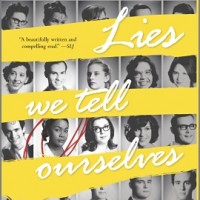 Robin Talley’s Lies We Tell Ourselves is a beautiful yet painful reminder of America’s history of segregation, desegregation, and integration. Talley begins her first novel in 1959, in the hallways of Jefferson High School located in the fictional town of Davisburg, VA. In these halls, we’re introduced to Sarah Dunbar, one of the African American students chosen to integrate Jefferson, and Linda Hairston, the daughter of an editor of a local newspaper. Talley simultaneously takes us through the minds and lives of both young women while they’re completing their final year of high school. However, for Sarah, this experience is a nightmare since, she, along with a few others, was chosen to leave her school and friends to begin the new journey at Jefferson.

Throughout this historical fiction, Talley allows us to peer into these students’ deepest thoughts and fears surrounding their experiences as they are introduced to racial hatred, firsthand. The students of this school come from racist white parents and African American parents who are members of the NAACP, who are both ignorant in their own particular ways. I choose the word “ignorant” carefully and here’s why. Talley has very delicately exposed both races at their core traditions and urges the reader to question these beliefs.

Additionally, Talley makes sure the reader is aware of the strong religious ties that the African American families have instilled in their culture. Even still, there are times in the novel where Talley forces the reader to become agitated with Sarah’s prayers to God while a group of white students create a circle around her before one of the male students grabs her breast. It is at this moment that Sarah realizes that not even her body is her own. Throughout the novel, Sarah repeats the Lord’s Prayer in her head and sometimes says it aloud. These instances bring about a prideful moment for those who are religious and perhaps a moment of revulsion for those who wish she would retaliate, just once and then continue to pray afterwards.

The female counterpart of Sarah’s character is Linda. While Sarah hopes to graduate high school without getting raped, Linda’s biggest concern is her wedding date, which continues the thread of simplistic and carefree living for the white characters throughout the novel. Linda’s place in the story is tightly wrapped in beautiful clothes that carry her through her extraordinarily popular days at school. Linda’s naiveté is most present when she realizes that Sarah, even though she is African American, has a family and a house, just like herself. Linda writes for the school’s newspaper and has the same mindset of bigotry as her father. However, Linda soon sheds this exterior of unawareness when she is forced to secretly complete a class project with Sarah. The two of them fight as though they are already in a lesbian relationship. The most physical intimacy they share is a kiss on the lips, which keeps both of them up at night and daydreaming about one another constantly. Even while Linda is with her much older male fiancé, she still finds time to reminisce on her kiss with Sarah.

While this novel tiptoes around homosexuality, the denominate theme is centered on race and gender issues during the late 50s: some white women trying to accomplish their goals of marriage and then motherhood, while on the other hand, many African American women are trying to become educated so they can help their partners with the financial responsibilities. We never actually read the word “homosexual” or “lesbian” but it is assumed that the “weird” feelings that take place in both of the young girls’ stomachs are the onset of same-sex attraction. Talley’s first novel is a very brave attempt to reveal another side of the closeted whispers shared amongst women in the late 50s. The hushed voices and goose bumped arms that Sarah and Linda give one another, are the same pieces of evidence that many women share today that prove that they, too, are living lies. One of the first lies we tell ourselves before we embark on something new is that we are not afraid.Talley urges the reader to be brave enough to think of all the lies we’ve told ourselves and of the lies that have been told to us and delete them from our minds but not before we find our own truths.

'Crossroads' by Radclyffe
'Insomniac City: New York, Oliver, and Me' by Bill Hayes
'Girl in Need of a Tourniquet' by Merri Lisa Johnson