‘Call Me Home’ by Megan Kruse

‘Call Me Home’ by Megan Kruse 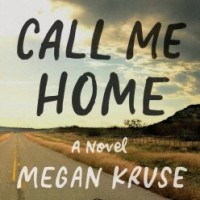 Megan Kruse’s monochromatic debut novel, Call Me Home, packs quiet power. Told in three voices of a shattered family, the book moves back and forth in time to trace the story of the Hollands—thirteen-year-old Lydia, her older brother Jackson, and their mom, Amy, who has long been the victim of her abusive husband, Gary. The main narrative focuses on the year that Amy and Lydia successfully break Gary’s bonds and disappear, and Jackson runs away first to hustle on the streets of Portland and then to Silver, Idaho, for a construction job; the book is non-linear and almost dream-like, flashing in and out of the main narrative to build an uncomfortable family history.

Watchful Lydia is arguably the star of the novel and her passages are gorgeously smart and sad, but Jackson’s chapters garner the most time, and his story is an intriguing one. This gay, barely nineteen-year-old falls in love with his 34-year-old married boss, and their affair—richly detailed, both intimate and unnerving, though the finale borders on cliché—becomes Jackson’s anchor, and ultimately, his impetus to regain his family. Amy’s chapters unravel the confused, youthfully stupid and innocent steps that brought her from her tiny hometown of Fannin, Texas, to the isolated wet woods of Washington state, mirroring the past against the present as she and Lydia move back toward Fannin, a place she once eagerly fled.

Call Me Home, as the title implies, focuses very strongly on the idea of home. It’s place-based for sure, but in this novel, who we call home is even more important. As the three main characters spin their stories, a web of connection binds them, even when they’re barely speaking, even when they are miles apart, a testament to how strong the bonds of family can be, even in the worst of circumstances.

The novel is structured circularly, and this makes sense, given that over the course of its progression, the idea of return grows stronger and stronger. Amy returns to Fannin and the life she left behind, Lydia returns to a safety she never knew existed, Jackson returns to his best friend, Randy, and with Randy’s help, to his Amy and Lydia. Amy, Jackson, and Lydia call each other home, and their bonds, Kruse shows us over and over, cannot be broken, not by time or place or betrayal.

Kruse can craft a fine sentence, and her maneuvers are subtle, almost too much so. There are times where the characters skate away from confrontation, leaving the reader wondering what more could be told. But perhaps this is the truth of three people so scarred by fear that the very idea of conflict sends them running. It is near impossible to blame these characters for their lack of reaction, given their shared history.

Call Me Home has a few slow spots, but Kruse’s skillful language and unusual story construction make for an intriguing meditation on safety, survival, love, and the bonds of blood.