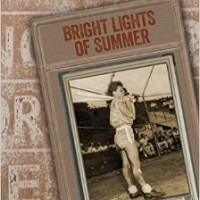 When Julie Newsome meets Theodora “Dizzy” Hosler in the opening pages of Bright Lights of Summer, she’s looking for information to better understand her recently deceased mother. Dizzy never knew Julie’s mother, but Julie has another motive for contacting Diz. She wants to write about women in softball in the 1940s and she hopes Diz is willing to share some of her stories about playing for the triple World Champion P.B.S.W. Ramblers. By listening to Diz’ tales, Julie hopes to understand her mother a little better, too.

As the two women become friends over a period of Diz’ storytelling, the story moves back and forth from a young Diz just starting her career with the Arizona team during World War II to present day interviews between an aging Diz and her new friend, Julie. The story of Diz and the love of her life, Francine Hainey—Frannie, captivates Julie. She encourages Diz to unwrap a tale that captures the excitement of women’s softball and the relationship between Diz and Frannie.

Diz is quite a delightful character. Although she is slowed by an aging body, her mind and spirit are as sharp as can be. She doesn’t let Julie get away with anything, especially as their friendship grows. Julie, for her part, moves beyond curiosity to become fully invested in the story of Diz and Frannie’s lives and she, like all of us, is unhappy when she discovers that the two women suffered through hardships and difficulties in their relationship, and she longs to hear about the happy-ever-after she wants them to have.

There are poignant moments to the story as we experience the older woman struggle to maintain her autonomy. When Julie takes Diz to visit Frannie’s grave, the moment is both beautiful and touching—and serves to give us a little more insight into the relationship of the older couple.

Real Hall of Famer, Dot Wilkerson, who played for the Ramblers during the historical time of the story, plays a supporting role with cameo appearances as a mentor to fictional newcomers Diz and Frannie when they join the Ramblers in 1941. It’s easy to imagine that Diz’ character has a bit of Wilkerson’s personality. Ames has spent time with Wilkerson, mining her memories of her softball experiences. The quality of her research shows as the tale unfolds and Ames captures the “heart” in the story, which book and Internet research could never impart.

Ames also uses well written dialog to fully engage us with the characters. When Julie interviews Diz, we’re sitting in a booth in a diner with the two of them, hanging on Diz’ every word. The transitions from present to past and back again are smooth, allowing us always to know where we are in time and place. Although the story tells the historical facts of the Ramblers and their tournaments, it only contains enough game details to allow us to feel a part of the action, not to overburden us with techniques and minutiae.

Ultimately, this is a story about love—the love of the game, the love between two women in a time when it had to be carefully guarded, and even the love of country with a subplot about the women who flew planes for the war effort. It’s a story of the struggles through the conventions of the times and the way women broke through those conventions to live their lives authentically.

Ames has given us a tale told in masterful style, weaving a story with a final twist to give the reader a “wow” moment. Rich in the history of the times, it puts a human face on a difficult period where women found their fulfillment in ways that would thrust them into modern times and allow them never to look back—except to tell tales of their strength and daring. Put on your mitt and get ready to catch a story of a life well lived and loved.