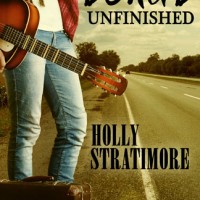 As Songs Unfinished opens, Shawn Davies is in big trouble. After a long spiral downward, she’s just about hit rock bottom and it doesn’t seem as if she’ll be able to bounce back up. Shawn leaves a guy named Brinkman knocked out cold in a sleazy motel, and counting what scant money she has to her name she decides there’s only one thing to do. She leaves Los Angeles and her dreams of a music career and heads east to her childhood home in New Hampshire.

Jaymie Del Harmon’s career with her band, Passion Play, is slowly getting noticed and their fan base is increasing. In a difficult move some months prior, the band left Los Angeles and moved back to New England to be closer to Jaymie’s ill mother. Jaymie knew she needed to be with her mom, who had been diagnosed with cancer, and the band members followed her home to support her and to keep the band together. When we meet Jaymie, she’s trying to deal with her mother’s death. That’s hard enough, but the nagging disappointment and insult of an unfaithful ex-girlfriend named Peach, only compounds her sadness and her struggle to move on.

These two women’s lives are about to intersect—again. Jaymie and Shawn knew each other in LA—back when the band was on its way to stardom and Jaymie and Peach were together. Back then, Shawn was a starry-eyed friend who idolized Jaymie and Jaymie encouraged Shawn to keep working toward her dream  to become a singer and song writer.

Those dreams seem to have come to an end for Shawn, dashed, like the bloody indentation in Brinkman’s head. It seems as if every dream Shawn ever had is fading away. Her optimism for a warm reception from her Aunt Betty along with a place to stay disappear when her aunt’s neighbor informs Shawn that Betty passed away a month before she arrived. Shawn didn’t know.  She was a homeless drifter in LA, so how could anyone have contacted her? Now, she’s forced to do something very difficult. Without Betty to take her in, she must face the one person she never thought she would: the father who rejected her long ago—the father who blames her for her mother’s death. When even that proves to be a dead end, Shawn becomes desperate—desperate enough to grasp at a message she hears on the radio. Passion Play is appearing at a local club and thoughts of Jaymie propel Shawn from her darkness to an encounter that may be her salvation.

The characters in this story are clearly broken, yet there is a small pinpoint of light in their gloom, a spark that flares when they come together, in spite of their hesitation to act on feelings. Shawn isn’t the only one who needs help. Jaymie is in need of redemption, too. But the plot of this story, although it appears to be simple at the start, becomes much more complicated as we become more immersed in the lives of these two women.

The minor characters that people this story are interesting and unique, from Jaymie’s friend and band member, the aptly named acerbic Nikki Razer, to supportive friends Devin, and the other members of the band, Kay and Brian. When trouble rears its ugly head in the form of Shawn’s new boss, Karla, some of the antics seem a little contrived, but they do add a sense of foreboding to the story. The theme of “songs unfinished” runs throughout as Jaymie struggles to finish a song to honor her mother’s memory and her unfinished life intertwines with Shawn’s to make us cheer these women on and hope they’ll figure it all out to find strength and healing.

All in all, this is a well written, well edited tale. It’s a romance with a flair for taking us in directions we never see coming. Songs Unfinished is a wonderful first offering that makes us hope for more stories for us to enjoy, from an author with great potential.