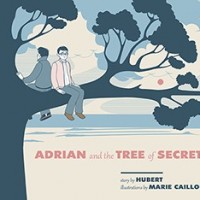 The catholic school trope is something we’re all familiar with when it comes to LGBT novels. The catholic school, as a symbol of matriarchal oppression, though veritably true, tends to wear down one who has maybe read a dozen novels like this. Experiencing it as a graphic novel by author Hubert, illustrated by Marie Caillou, however, was a subtle spin on a familiar story.

In Adrian and the Tree of Secrets, we find our title hero stumbling through the barriers of a catholic school as a closeted gay teenager. Adrian is a deep-thinking and socially awkward boy who attends a catholic school in a seemingly small town. As we can gather, he absolutely hates it. Not only is he busy at school, but his teachers and school justice system victimize him to to no end. One particularly emblematic scene shows us an encounter Adrian has with his bullies during gym, being shoved to the ground and verbally assaulted. When the gym teacher comes to interfere, he appeals to his adversaries rather than him. Adrian is not only battered with homophobic slurs throughout the book, but he is even abused by a teacher at a certain point, and the principal is anything but helpful in sorting it out.

To add to the hyperbole of his life, his only friend at school is a semi-goth outcast who hardly likes Adrian anyway. Adrian himself dresses in a nerdy fashion and wanders around town buying philosophy books and speaking to no one. His mother is no less of a monster than the teachers at his school, and hounds Adrian’s every move—where he’s been, what he does in his own room, when his schoolwork is done, what books he buys, etc. The only break Adrian seems to catch these days are with a very empathetic aunt, who we don’t know much about, nor is she ever really developed.

The realities captured in this book about the violence in small towns and catholic schools are not at all unbelievable. That being said, the oppression we witness in Adrian’s life really do pile up in an exhausting way. All of these different brutalities against him seem to be irreparable, and for much of the book the author beats a dead horse letting the reader know how unhappy Adrian is. Adrian, in response to his problems, uses sarcasm and depression to cope with like a kind of Daria-Charlie Brown hybrid. Though not an entirely original character, something that’s interesting about his psyche is that Adrian doesn’t necessarily seem to be closeted by a harsh environment so much as he is very open and honest with himself, yet has no one in his life to trust his feelings with. Adrian is clearly the smartest character in the book and struggles with being misunderstood in an intellectual way.

All of these things seem to be lightened, though, when Adrian finds himself pursued by the coolest kid in school, Jeremy. Long story short, Jeremy is a closeted straight boy who ends up kissing him in a tree—a romantic meet-cute—and the two spend the rest of the novel avoiding being caught. As we may have seen it coming, the secret they shared in the tree becomes exposed and you can imagine what happens from there.

Something this book offers is an intense, innovative graphic appeal. Though the figuration in Hubert’s illustrative style is stiff, the animation is executed in a stylistic way that feels something like a collage. The book is filled with saturated pastels and near-surrealist color palettes that sometimes bring us blue trees and a pink sky. The reality that Adrian exists experiences a tonal shift given the bizarre saturation of his world, creating an anxious feeling that accompanies the subject matter well.

This book is perhaps five to eight years too late. It seems to exist pre-”It Gets Better Project” and tells a story of gay teenage oppression that has since 2010 been told over and over again. It offers no real consolation and chooses to make an exposé of oppression, rather than offering a solution to a problem. In that, the book’s weakness is also it’s strength. Adrian and the Tree of Secrets does not waste time blowing sunshine into the picture. It portrays an actuality that exists in a town somewhere perhaps close to where you live. The book is caustic, yet honest in that we’ve yet to resolve the very tensions the book addresses, and that much is undeniable. Though the target demographic is growing smaller, put in the right hands, this book could mean a lot to someone. Though it offers no hope, it does make one feel less alone knowing that there are others out there who have a secret that shouldn’t be kept.