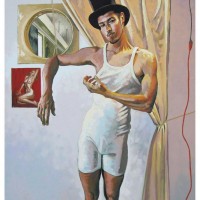 “There is no royal / road to geometry,” writes Matthew Hittinger-as-Euclid in the poet’s new book, The Erotic Postulate; “no God,” he continues, “but in things like I and You One and Two.” As revealed in one of the many notes at the end of the book, these lines paraphrase words the mathematician once uttered to King Ptolemy Lagides when the latter asked for a few quick lessons. Like all rigorous disciplines, understanding geometry requires sustained concentration; as the latter half of the passage suggests, any responsible study of shape, size, position, and space will challenge the ways we join and separate matter. Many poets exploring connections between math and poetry have restricted their attentions to issues of form. By contrast, Hittinger’s approach is more philosophically integrated. Reacting to various sources and telling moments of observation and memory, he ties conceptual frameworks with personal history. He sees that geometry is not the cold study of numbers and facts but a complex, abstract system of human thought inevitably tied to our values and feelings. It is from the perspective of a humanist that Hittinger deconstructs and extends math’s most basic (and deceptive) equation: 1+1=2.

Although math functions in Hittinger’s book as a metaphor for understanding the politics of love and community, the poet is also interested in using numbers to exploit form.

Again the spirit of Marianne Moore shows herself through Hittinger’s elaborate syllabic patterns. “Two Black Swans,” is an impressive example of form mirroring content: nine septets alternate seven and nine syllable lines visually arranged to approximate the bodies of swans. As seen in the opening stanza:

This careful lineation of prose matches the poem’s subject about two homosexual swans which, by the fifth stanza, are “doubled in the water / in the eye. ” The removal of commas between compound phrases effectively blurs together groupings of words that would otherwise be parsed for clarity.  As a result, two texts operate at once: one without commas and one we imagine with traditional pausing. In actuality, both texts are layered together in the mind’s eye in unusual harmony. Put another way, when one voice harmonizes with another, a third voice is created from the blend of the two.

Weighing in at over 100 pages of verse, The Erotic Postulate is a full and generous experience that deserves all of the demands it makes upon its readers. Sexy and smart, these poems pivot on surprising leaps and turns of language. By far my favorite of its four sections is the last, “Euclidian City,” a suite of aubades, ambles, elegies, and mediations about life in New York City. The language here brims with crisp imagery, lush litanies, and an arresting lyric apprehension tempered by moments of compelling narrative. These poems also share noticeable affinities with various other poets. The final lines of “He Who Lies on the Promenade,” for example, recall the questing voice of Whitman’s “Crossing Brooklyn Ferry”:

Still, despite these connections, it is Hittinger’s own intense curiosity and self-examination that give his poems unmistakable power. In “Suspension” a view of Manhattan from the Brooklyn Bridge provides moving moments of voices bearing witness: “It’s //a Jehova’s Witness Center now,” one Edrena says as she ponders the space where “the Twins” once stood: “When I saw them, I knew I was home,” Hittinger’s own narrative voice struggles to understand their devastating excision from the landscape: “Somewhere between tower one and two / I pause….”Indeed, all of the poems in The Erotic Postulate are essentially ruminations between spaces where losses gather. A lesser poet might never acknowledge them, but in such finite dimensions, Hittinger discovers the key to infinite wonder.