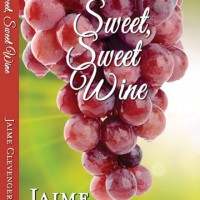 In the opening paragraphs of Sweet, Sweet Wine, Riley Robinson and Ana Potrero meet in the Rocky Mountain town of Catori. Riley has come to town to put some space between her and her recently failed relationship by visiting her friend, Sharon, who owns a bed and breakfast in the tourist town. Ana is in town on business from her home in California, consulting with a local wine boutique owner. As the two women share a split cottage, they are at first mildly annoyed with each other; then, they share a mutual attraction, which quickly becomes an interaction, which ultimately begins a relationship filled with sensuality, emotion, complications and a sprinkling of mistrust.

Ana herself has recently ended a relationship with Tom—or so she says. At the winery, when Riley sees a stranger—who turns out to be Tom—lean over and kiss Ana while standing in full view, she decides that Ana has chosen Tom over her and leaves without telling anyone. The story begins with the meeting and passionate encounters of these two women, then takes us back and forth from that first meeting to Riley’s pre-break-up life with Lisa, then to a happenstance meeting with Ana in a Denver airport after the Catori encounter. These vignettes expose two lives that are similar in some ways yet vastly different in others. Both women have ex-partners that hang on. The former partners can’t seem to get their belongings out of Riley and Ana’s respective houses, nor can Riley and Ana seem to get them out of their lives, creating a convoluted and problematic situation. As the two women struggle to figure out how to maintain a long-distance relationship, the exes prove to be a thorn in each of their sides.

Then, there are the secrets that each woman holds: Ana isn’t out to her family, and Riley has financial mysteries she reveals to very few people. Whether or not these secrets will be their undoing, rather than the exes, adds another layer of uncertainty to this tale.

Jaime Clevenger has given us a fluidic tale of the struggle to let go of past failures and move toward a fulfilling relationship filled with deep, abiding love. As the story moves from present to past to present again, it unfolds to help us understand the characters more and more. However, to reach the point where both women will finally be open to one another, they must each gain the capacity for honesty and trust–a task that is made all the more difficult by their past experiences.

Riley is down-to-earth and likable from the start, in spite of her somewhat mysterious background. Her ex-girlfriend, Lisa, who can’t seem to take “no” for an answer, is problematic, a little strange and definitely not to be trusted. Ana, although seemingly forthcoming with Riley, seems just too good to be true, and we can support Riley, at least in part, in her misgivings about her. One of the “characters” of Sweet, Sweet Wine is indeed the little town of Catori itself, infused with beauty, and strung by a river that can turn from idyllic to vindictive in one torrential downpour. As the town’s inhabitants’ struggle to recover from a devastating flood, the tension seems to echo the strain that Riley and Ana experience while trying to overcome their own obstructions.

This is a story of the struggle toward possibility as old baggage is left behind. It’s a tale of the resiliency of the human spirit to find a true home in love and acceptance. This is one to snuggle up with on a long winter’s night, preferably with a fire burning in a cozy fireplace and a glass of sweet, sweet wine on hand—or a cup of rich hot chocolate.