All I Love and Know (William Morrow), by Judith Frank, is a brilliant, thoughtful, unexpectedly funny new novel about a gay couple, Daniel Rosen and Matt Greene, who live in Northampton, MA. It opens with a café bombing in Jerusalem that kills Daniel’s twin brother Joel and Joel’s wife Ilana. When it is revealed that Joel and Ilana designated Daniel the guardian of their two small children should they die, a firestorm erupts in both Daniel’s and Ilana’s families about the possibility that the children will be taken out of Israel and raised by gay men. The novel explores what happens to Daniel and Matt’s relationship in the wake of this conflict and this trauma. It is also page-turner that keeps the reader deep in the story until the very last page. And thinking about it afterwards for days.

What is the heart of All I Love and Know for you?

For me, the novel is about how you mourn a death from terror when the cultural scripts handed to you (“the war on terror”) feel toxic to you. It’s also about the various forms safety and danger take in a life, about parenting, about Israel/Palestine. And about the experience of being an identical twin.

The relationship between Daniel and Matt, the gay couple at the center of the book, is so resonant, intimate and real. Why did you choose to write about gay men?

To be honest, I chose to write about gay men for commercial reasons. My first novel, Crybaby Butch, was about lesbians, and garnered no interest whatsoever from agents. A friend of mine quoted his agent as once saying, “Nobody wants to read lesbian novels, not even lesbians.” Seriously.

That much said, once I made that choice, my imagination wound itself around these men, around Jewish masculinity, and the way parenting without a mother feels inimical to Jewish life. There’s a minor AIDS plot in the book too, in which the characters are forced to think about the relative dignity and importance of a man killed by AIDS and a man killed by a terrorist, and about the ways in which safety is and is not within our control. That became important to me. It would have been a very different story with women at its center.

I loved your depiction of Northampton, where Dan and Matt live. We both live in Western Massachusetts. What was it like writing about a place so close to home?

I’m not sure why my instinct, when writing about Northampton, was gentle satire. Is it the earnest goodness of the place? I saw a lot of comic possibilities, too, in the way Matt, this young, handsome, stylish gay New Yorker, has ended up in such a profoundly lesbian place. But it also struck me what a refuge a place like Northampton would be for these kids, whose lives have been struck by violence. If I could describe the Northampton of the novel in one word, it would be “peaceable.”

The book opens with unforgettable scenes of Matt and Daniel rushing to Israel from their home in Northampton, MA, after Daniel’s twin brother and his wife have been killed in a café bombing in Jerusalem. It emerges that Daniel has been made guardian of the couple’s two small children. The family story is central to this book, and it can’t be separated from the violence of the political situation that creates it. Matt and Daniel both oppose the Israeli Occupation. Did you have any hesitation about setting your story in such a volatile context?

The volatility of the context was what attracted me to writing about Israel. My family moved there in 1976, and I lived there for six years and went to college there. My sister, who married an Israeli man, is the only one of us who stayed. But the effects of those years have lingered for my entire family, and I wanted to reckon with that experience. It was only when I came back to the US that I became conscious of this whole realm of Palestinian life under occupation that I couldn’t see in Israel, even when I was only moments away. Many American Jews hesitate to criticize the Occupation, believing they don’t have a right since they aren’t actually living in Israel. But I’ve come to believe that if there are some things you can only see when you’re in a place, there are also some things you can only see from far away.

I was struck by the ways that you depicted Matt being shut out of official discussions of the custody of the children, even though he becomes a very active parent. That’s part of the lingering aftershock of the violence, but it also struck me as an experience of exclusion that many of us grew up with as part of the price of being queer, and it creates at least one (well, or more) of the most emotional turning points in the books. Did you find it painful to write those scenes?

Matt is a funny and irreverent guy who wrestles with his own self-involvement and selfishness. So, not to sound mean, but it was actually kind of fun messing with him because each exclusion produced such a gaudy starburst of emotions. My main concern was not making his partner Daniel, with whom it may already be hard to connect because he spends so much of the novel traumatized, too unsympathetic. 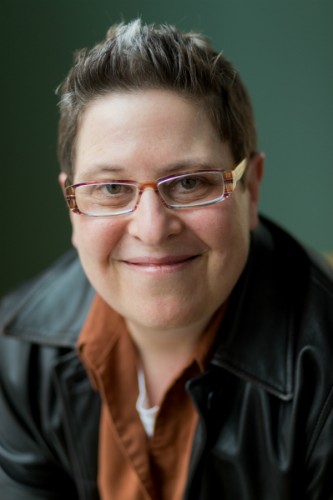 Your first novel, Crybaby Butch, won a Lambda Literary Award for its exploration of the connection between two butches of different class backgrounds in the context of an adult literacy class. I’ve heard you mention Leslie Feinberg as one inspiration for that book. Do you see common ground between Crybaby Butch and All I Love and Know?

Both novels are centered around mourning, which has been a preoccupation of mine; I’m especially interested in interruptions and impediments to the mourning process, what Freud called melancholia. I think I’m ready now to write a book that’s not about mourning!  But both books also explore queer relationships that face a major challenge, and pose the question of “what happens to a couple when one person changes so much he or she becomes almost unrecognizable to the other?” A friend of mine says that my main strength as a writer is fights between lovers.

Are there other books or other writers whose work has been important to you in writing All I Love and Know?

I reread Phillip Roth’s The Counterlife a few times, because it seems to me to be the ur-text for Americans’ relations to Israel. He would seem like an unlikely model for a lesbian Jewish writer, and my response to this novel is equal parts irritation and awe. The Counterlife is literally about American Jewish masculinity and Israel–it opens with impotence and ends with circumcision. It has a blazing portrait of a messianic settler. It rages about both American Jewish complacency and anti-Semitism. When I worry that my novel will alienate some Jewish audiences, I go back to The Counterlife and think: now that’s how you offend the Jews.

Adina Hoffman’s My Happiness Bears No Relation to Happiness, about the Palestinian poet Taha Muhammad Ali, had a big impact on me. It was the first time I’d read an actual depiction of the expulsion of Palestinians from their villages in 1948, and it humanized Palestinian villagers for me. They had no coherent leadership, and they related to the news that the Zionists were conquering towns with a combination of mordant humor and deep pessimism.

And, perhaps strangely, because my novel is totally unrelated to it, Colm Tóibín’s The Master, one of my favorite novels of all time, for the quiet and resonant way it describes the writer’s life. It’s a novel that helps balance me, emotionally and creatively.

Is there anything else you would really like to say to the readers of Lambda Literary Review?

I’m interested in the responses of gay men to the novel. My native informants helped me out with various things, like what music gay men were listening to in 2003. They had strong and sometimes uncomfortable (uncomfortable, that is, to me) responses to elements of the novel, especially to one of the climactic moments.

I also hope that readers of Crybaby Butch will find and enjoy this book. They were the smartest, most engaged readership I could have asked for.

Read This! A Chilling and Atmospheric Tale of Queer Desire
'Fogtown' by Andersen Gabrych and Brad Rader
'Collected Poems' by Naomi Replansky