“What people don’t get is that adult themes are not just restricted to prose; they are perfectly suited to comics as well.”

Jon, you won a Lambda for Gay Erotica in 2010 for Teleny and Camille. What part do you feel that erotica plays in LGBTQ comics?

I think that sex in our works is something that we all to easily surrender in order to fit in with mainstream publishing, but in the end it just makes things worse. When we willingly sanitize our stories we kill all the love and reality that comes with seeing two men or two women in bed together. Love stories involve sex, and when you reduce it to fully clothed kissing, then you send the world, and your own people, the message that that is all that is allowed us. We need to show our reality, which includes real sex. Of course, how you treat the sex doesn’t have to be sexy. 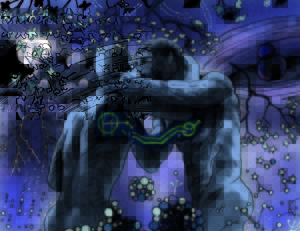 Teleny and Camille is a graphic novel adaptation of the famous gay novel attributed to Oscar Wilde and his circle of friends. Clearly, you have an interest in and knowledge of LGBTQ history and culture. How do you see that influencing your work?

What made Teleny so interesting to me was the language. Not just the lush Victoriana, which was beautiful, but also the way they expressed same sex desires before modern gay identity was even formed. They had no vocabulary to draw upon. The words we take for granted today were not in usage yet so the writers really struggled to describe a love that was different and completely unsung. It was so refreshing for me as a modern gay man to just stop and really think about what it means to me when two men come together in a loving way. They were not as burdened by the labels 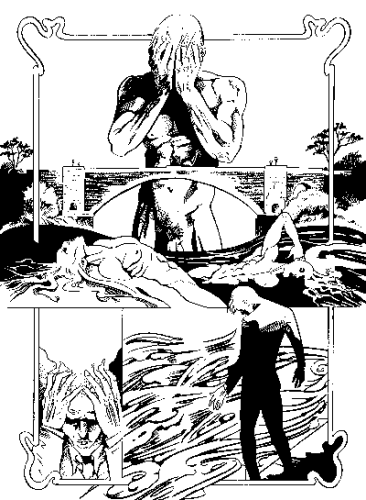 we give ourselves now. In our rush to ask for ‘exactly’ what we want sexually I think we have willfully limited ourselves to other options. In the past there was more of a sense of brotherhood, more forgiveness and acceptance of our collective deviations from the norm.

To answer your question, it was the freedom I felt from these writers challenging me to be free as well.

If these Victorian writers were creating a vocabulary for same-sex attraction that hadn’t really existed before in prose, do you feel like a similar project either has been done, or is now underway, for a specifically comics vocabulary for queerness?

Yes, a visual vocabulary specifically for queers is being crafted now with every new graphic novel. We can only see it when looking back, as it takes us in and we just experience it as readers and don’t analyze. I will say that the underpinnings of our society will be revealed in graphic novels, as it is the last bastion of unincorporated free speech. Cartoonists work alone and they have the unique opportunity now to speak their minds without filters because they are under the radar.

Does the comics medium, with its visual components, abstracted manipulations of time, and other singular characteristics, have its own unique intersection with queer themes and depictions? 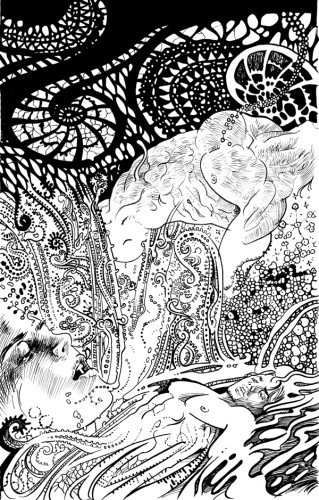 Comics is a visual medium and so it can be taken in very quickly. That is the reason it is often targeted in bans, because you can have twenty pages of rape in a novel but you would have to read that, but one panel of a comic is readily visible in a second. Censors are lazy and comics make it easy for them.

What people don’t get is that adult themes are not just restricted to prose; they are perfectly suited to comics as well. Queer themes are effective because queer readers enjoy comics. Queer readers are eager and clever and don’t hide from difficult concepts.

Tell us about how you got into making comics. What’s your career path been like as a cartoonist? And do you have any advice for new cartoonists who want to create queer-themed graphic novels, comic books, strips, and webcomics?

I started making comics as a teenager, but I didn’t get published until I was twenty-five. That came about by going to conventions and hanging out with as many cartoonists and editors as I could, and just being real to them. Not selling myself. I knew what I had in me, but my skills hadn’t gotten there yet. I just tried to only present my best work at the time, and always follow through on things that I promised.

I do feel that queer cartoonists are powerful. Our stories only seem small to the mainstream world when in fact we are shaping our culture and identity. My hope is that we show happy moments free of shame, and great potential that the next generation can visualize and strive for. If the world isn’t to your liking, show another one that is right. It can make a difference to someone just knowing that there are others who feel the same out there. Comics can tap into and express emotions that other mediums cannot. Quiet moments that slip under the radar. These are universal and bring us together. These are weapons of change.

What’s next for Jon Macy? What are you working on right now, and what’s in the pipeline?

Right now I’m finishing up my graphic novel Fearful Hunter, which is an exploration of what gay male monogamy means to me, and what mental illness in a gay relationship can be like for a caretaker. Very soon I will be starting a project I have wanted to do for twenty years. An imagining of what a world based on music and the arts would be like, called Sebaceous Funk.

All images by Jon Macy

Justin Hall is a cartoonist living in San Francisco with his partner and their pet python. Justin has won both the Xeric Award and the Prism Comics Queer Press Grant for his work, which includes the series True Travel Tales, Hard To Swallow (with Dave Davenport), and Glamazonia the Uncanny Super Tranny, the latter of which was also nominated for a Lambda Literary Award. He’s the editor of the Lambda Award winning No Straight Lines: Four Decades of Queer Comics, a massive collection of LGBTQ comics published by Fantagraphics Books. His comics have appeared in publications such as the Houghton Miflin Best American Comics, The Book of Boy Trouble, Juicy Mother, and the San Francisco Bay Guardian.