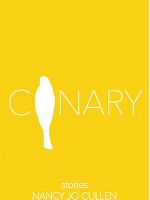 Every story in Nancy Jo Cullen’s debut collection skates along the edge of weirdness. These characters are just a tiny bit off, drawing the reader into their delightful eccentricities. The narcissistic mother accompanying her teenage son on a first date; the surly cousin at a family party who finds someone interesting to kiss; the deeply religious man and his cabaret-singing wife. In eleven compact stories, Cullen follows her strange characters through life-changing decisions. Birth and death are the poles along which most of the stories’ plots are strung: mothers get pregnant for good or bad; lovers mourn their losses. And while these may be predictable terrains in good fiction, Cullen’s landscapes are far from usual. What if a husband pining for his dead wife drives her ashes around as his companion? What if the more maternal of two lesbian moms decides to leave? It’s the tilted axis on which Cullen’s narratives rotate that make them compelling.

Among the eleven stories, the point of view jumps back and forth between first person and third person narrations, which may lead readers to find the first person stories smoother. The intimacy of a first person narration allows for a foothold in the character’s strange world, especially when something is amiss. It makes them just the slightest bit more believable. When the bold Regina claims, “I was into being a lesbian or a movie star. It wasn’t as easy a choice as it might sound,” it’s the brashness of the statement that lets us into her world.

These stories also tend to want to stop on a dime, becoming short short tales that might leave the reader wanting more. Cullen likes to stop right where the drama may begin. When Regina finds her dude friend-turned lover and the annoying hippie she’s been trying to avoid hanging out in her bar, she takes it as a cue to walk out on them, and on her town. But where may that adventure lead her? The title story comes to a drastic conclusion as well, when it would have been just as compelling to watch the son of a narcissistic mother try to navigate her insanity. Brevity succeeds most in these stories when their conclusions light upon a moment of sincere hope.

Queerness is a satisfying thread throughout the collection, as Cullen ups the ante on any traditional coming-out story arc and instead drops LGBT characters and references in everyday life, just as they’d always be. A mother who learns she’s gay later in life isn’t the focal point of the story, but appears just outside of the frame. A gay man isn’t concerned so much with being gay as he is with his religion and his wife. A butch teenager gets help from a mourning widow, but her gayness isn’t the axis of their journey. Cullen’s debut marks her as a welcome new voice in queer fiction.

‘The Hope of Floating Has Carried Us This Far’ by Quintan Ana Wikswo
‘Inside a Pearl: My Years in Paris’ by Edmund White
'You Only Get Letters from Jail' by Jodi Angel