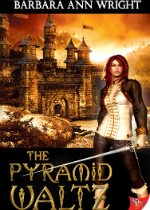 Demons come in varying forms and perhaps not all demons are equally evil. In The Pyramid Waltz, the kingdom of Farraday holds secrets traditionally known only to the royal family. Every five years, the king holds a ball, during which the royals engage in a dance called the pyramid waltz. If only the subjects of the kingdom knew how dangerous and life-altering the ritual was, they might be more considerate toward their rulers instead of being as demanding and self-centered as they are.

Princess Katyarianna Nar Umbriel is second in line for the throne. As such, she is the protector of the king and queen, the head of the secret Order of Vestra, whose only mission is to seek out traitors to the throne and destroy any opposition to her father, King Einrich Nar Umbriel. When Katya isn’t fighting for the king, she’s busy being a bit of a rogue at court, always teasing those who would vie for her favors, but never letting them in. In the world of the Farradians, the subjects of the royal family, same-gender love is accepted as much as opposite-gender attraction, and the princess’ attraction to women is well known. This makes for some interesting interactions from subjects with their own agendas.

Nobles and courtiers come to the palace to curry favor with the royals, something Katya abhors, but she knows she must play the game. When a young woman named Starbride comes to court from the far-off land of Allusia, her only objective is to find the court library and learn all she can of Farradian law in order to help her people negotiate fair trade with the Farradians. When she meets the princess, the attraction is immediate and deep, but Starbride refuses to use the blossoming friendship between them for her own gain.

As Starbride and Katya navigate through the waters of their growing attraction for one another, both must learn how to interact with each other, and Katya’s secrets are slowly revealed to Starbride. As this happens, Katya is amazed that Starbride wants to continue the relationship, but Starbride has her own issues to overcome in dealing with the royals. She hates secrets and she finds she longs for adventure, something that keeps getting her into trouble, and from which Katya must rescue her—over and over again.

The Pyramid Waltz is a fantasy filled with intriguing depictions and people: Pyradistẻs, folks who infuse glass pyramids with magic or mayhem for protection or destruction, monks who attain enlightenment through ribald fighting, and the nuanced cultural details of the Farradian and Allusian societies, including the machinations of the royal court, are among the fascinating details in this story. Then there is The Aspect that is part of the royal family’s nature, the loyal members of the Order of Vestra and their own personalities and interactions with the princess, including the mysterious, masked and mute Pennynail. Descriptions of court are richly defined and presented within a fascinating world. The mystery of who is trying to undermine the royals and let loose the terrible Yanchasa on the citizens of Marienne weaves intrigue throughout and helps show us Katya’s devotion to family and her tenacious and altruistic personality amid the heartwarming blossoming romance between the princess and the courtier.

The final chapters unfold quickly. Although the mysterious identity of one of the characters is never revealed, Wright has given us a story told with the essence of “Once upon a time…” and includes characters who are charming, in spite of the monsters lurking within and around them, along with a classic love story to be savored by the romantic in us all. All this is topped off with a healthy dose of a very creative, yet believable, world into which the reader will step to find enjoyment and heart-thumping action. It’s a fiendishly delightful tale.