‘Love by the Numbers’ by Karin Kallmaker

‘Love by the Numbers’ by Karin Kallmaker 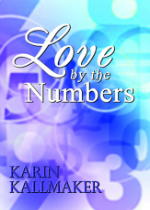 Love by the Numbers—a book about a book—and its author, Professor Nicole Hathaway. Nicole is a numbers kind of gal. She’s a cerebral perfectionist who exhibits little emotion—except for the annoyance she feels at her Indian mother for serving vindaloo for dinner and her intrusion into Nicole’s personal life. Everything is pretty black and white for Nicole. That is, until she slips on that leather jacket and becomes ’Cole, the “bad girl” who loves them and leaves them breathless as she disappears into the dark of night.  Then things get all gray and misty—and sensual.

Professor Hathaway has written an academic tome that’s taken the mainstream by storm. Who would have thought that a book about the statistical data of love and romance would hit the bestseller list? As the book soars to the top of the charts, Nicole is forced to get out and mingle with the public, something she is usually loath to do without her leather jacket. Her publisher insists she go on a whirlwind book tour and he’s assigned her an assistant to help her navigate the journey. However, Professor Nicole Hathaway does not suffer fools lightly and she has been through a long line of assistants. Her publisher offers her one final candidate as the book tour is about to begin. Nicole’s mission is to get rid of this one before she has to leave for Europe with the woman.

Lillian Linden-Smith is a woman with charm and a secret—and a desperate need to make a living. Although the media portrays her as a spoiled rich kid with criminal tendencies, Lily is actually one hurt, frightened lady who’s been abused by the paparazzi and a maligned by a broadcasting legal personality who’s propelling herself away from a “has been” label using Lily for impetus. Lily’s uncle is Nicole’s publisher and he’s giving Lily a chance to earn her keep and hide in plain sight when he sends her to the Hathaway home to report for duty. Lily first encounters Nicole’s mother and her younger sister and quickly endears herself to Nicole’s mother, Indira, before Nicole returns home from the university where she teaches. This puts Nicole into a more heightened state of self-protection than usual. During their first meeting, Nicole first tells Lily she doesn’t need her; then, resigns herself to her unwelcome company as they embark on the trip abroad.

As if using sleight of hand, Lily works her magic and Nicole succumbs to her charms as the two trek around Europe and the States touting Nichole’s book. When Nicole presents the ideas reflected in her book to a public with whom she has no desire to interact, Lily works her enchantments both with Nicole and those involved in Nicole’s appearances. As Nicole and Lily fight an inevitable attraction, we see Nicole soften and Lily let down her guard. If these two can ever allow their secrets not to define them, they just may have a chance together. But when Nicole’s pregnant and unmarried sister, Kate, ends up in the hospital clinging to life, Nicole must come to terms with who she is and what is most important to her.  In order for it all to work, though, Lily must also stand up to her own demons.

The love story is engaging and is filled with just the right amount of tension to make the nerve endings buzz as Nicole and Lily learn to adapt to the inevitable result of their growing passion for one another. The characters are appealing in spite of—or perhaps because of—the secrets each one holds, preventing them from opening their hearts. The story line is appealing and draws the reader in. It’s also filled with that tongue-in-cheek, ever-so-sassy humor that Kallmaker does so well. Love, by the numbers, doesn’t always go according to plan, especially when the plan is not to love at all—and family, in all its aspects, is sometimes annoying, but always caring. Love by the Numbers is another win for Kallmaker to the delight of readers everywhere.

'You Only Get Letters from Jail' by Jodi Angel
'The 5' by Iza Moreau
Jeanette Winterson: It is the Imagination that Counts