‘Nevada: A Novel’ by Imogen Binnie

‘Nevada: A Novel’ by Imogen Binnie 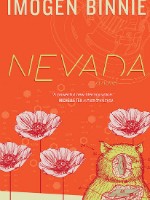 Our heroine, Maria Griffiths, is a punk trans woman living in New York, tumbling through life with a fresh internal monologue of identity politics, knuckle tattoo ideas, jaded observations, and deliciously dark humor. When her girlfriend of four years tells her over brunch that she’s cheated on her, Maria’s barely-held-together world begins to unravel. She darts through her everyday existence—clocks in at the bookstore where she works, eats a bagel, bikes over the Williamsburg Bridge, ignores her cell phone—while she puzzles out her next bold move.

The landscape of her New York is as authentic as her messy life: greasy breakfast at Kellogs, bad sex in the bathroom of a downtown Burritoville, slicing her way through Brooklyn by bike, availing herself of the subway when her own internal map lets her down. She’s the kind of intelligent loner that’s one part Daria and one part Holden Caufield, calling bullshit on herself and the world around her, and referencing everything from Fugazi to Amy Hempel to Michelle Tea’s The Chelsea Whistle—her self-deprecation wound tight around her own self-awareness. On an alcove of the Williamsburg Bridge, Maria razors into the following train of thought:

“It strikes her that she probably kind of hates everything. She picks a fight with herself. Things she doesn’t hate: trans women who have just figured out that they are going to need to transition but don’t know what to do about it, so they’re super nervous but also kind of relieved. She doesn’t hate trans guys who are working on the fact that they’ve acquired male privilege outside the queer community, but also in a weird way that their presence tends to eclipse or eliminate or invalidate that of trans women, so they’re working on it and starting conversations about it and being accountable to trans women.

Pretty much all of cuteoverload.com is pretty okay, actually.”

The irresistible cadence of Maria Griffith is a seamless stream of consciousness about identity, queer politics, feelings, pop culture, and, well, life.

While readers may be eager to follow Maria out of New York, a flip of the page finds the talent of Binnie hard at work. Part Two begins with James, an unhappy twenty-year-old stoner living in a small town in Nevada where the only things around are a Wal-Mart, the girlfriend who he recently fought with, and the laptop he uses to look up images of men transformed into women. His surly charm is as appealing as Maria’s and Binnie lays out James’ backstory in a style similar to Maria’s interior monologue. As soon as James finishes high school, he finds himself a small apartment, and is both anxious and eager for the freedom to fill his closet with dresses. He orders his first dress off of eBay, “panicking that it [is] going to be shipped in a box labeled ‘dress’ and left out in front of the door of his apartment.” The scene of what he actually finds in the box—a dowdy frock that feels like terrycloth—is near perfect. But this isn’t a coming-of-age novel tied up neatly with a bow. The narrative hums along with James smoking pot, looking at porn, and ignoring himself until a single, grin-worthy one-sentence chapter strikes:

“As soon as Maria Griffiths sees James Hanson in the Star City, Nevada Wal-Mart, she’s like, that kid is trans and he doesn’t even know it yet.”

Their subsequent meetings are loaded with all the awkwardness and truth that such a situation musters. Binnie is a master of realism in her fiction. What’s more, she slips between narrators with Madame Bovary-like precision, reeling between thoughts from James and Maria, as well as Maria’s girlfriend and James’ girlfriend, seamlessly within a scene. Not only is it a joy to see the voice of such a strong trans woman narrator on the page, but it is also electric to have that voice appear in such an expertly woven narrative.

Binnie allows the novel to find its own ending, avoiding any clichés or sentimental tropes that could befall a trans woman and her young probably-trans friend. Queer novels are often deemed readable because they’re queer. Here’s a queer novel that’s readable because it’s queer, and it’s unlike anything you’ve read before.