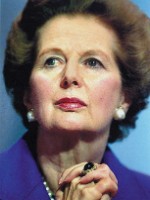 Whenever a former head of state dies, the revisionist history begins. It began with startling immediacy after Margaret Thatcher’s passing on April 8. The 87-year-old former Prime Minister was the longest serving PM of the 20th century and the first and only woman elected PM in the nation with the longest-serving female monarch in the world. She died from a stroke after having suffered from dementia for years as chronicled in John Campbell’s book, The Iron Lady: Margaret Thatcher, from Grocer’s Daughter to Prime Minister (and portrayed with Oscar-winning sincerity by Meryl Streep in the film version).

Thatcher herself wrote over a dozen books about her years in public office (she had been in various posts for 20 years prior to her election as PM)–among them Statecraft: Strategies for a Changing World, Path to Power Downing Street Years, and Margaret Thatcher: The Autobiography.”

Over the last decade there have been several biographies and dozens of other books about Thatcher and Thatcherism, as her political metier was defined. A new biography, Margaret Thatcher: Power and Personality, is due out in October. Several ebooks appeared on Amazon on the day of her death. No doubt now that she’s dead, still more histories of Thatcherism will appear.

One book that will no doubt cause both consternation and surprise is Damian Barr’s memoir, Maggie & Me, due out next month. Barr presents Thatcher as iconic to a young English boy of the 80s trying to survive a harrowing home life and being gay at one of both the most repressive and hedonistic times in English life.

Barr sets Thatcher as a kind of mentor: Her tough love approach to the “nanny state” forces him to “walk tall” and “tough it out.” For Barr Thatcher is an “illicit gay icon,” with her cool blonde demeanor. She’s his ironic hero.

But not many queer writers who came of age or middle-age during Thatcher’s era see her that way. Yet Barr certainly describes her impact well: It’s difficult to articulate just how phenomenal Thatcher’s presence was in both the UK and on the world stage in that period from 1979 to 1990 when she was PM. I lived part of the time in London in the late 80s, contemplating moving to be with my then-partner who lived there. The Thatcher years in London were fraught with all kinds of activism, but they absolutely signaled a definitive rise of lesbian and gay activism–specifically due to the homophobia fomented by Thatcher and her administration. Queer writers in the U.K. made Thatcher the villain of their pieces–and it was, alas, a role she deserved.

London imprinted me. And so did Thatcher–but then she imprinted everyone who lived in the UK or any of its protectorates. Some obituaries of Thatcher have noted that she was larger than life, either as villain or savior.

What they don’t really explain is why.

Regardless of why, Thatcher was omnipresent. There was never a day in London when one was not aware of her and her leadership. She was always in the news, always at Parliament, always crafting policy, always on the world stage, always rattling a cage domestically or internationally. She wasn’t one of those leaders who disappears after being elected. It was as if she believed that one minute out of the limelight would be her downfall and she needed to imprint every second of her prime minister-ship.

It was compelling for the young lesbian-feminist reporter that I was, being in a country run by a woman. As a feminist, I wanted to experience that difference–having a woman in charge. That constancy of presence of Thatcher’s was part of the difference, the intensity with which she seized power was another. Thatcher was loved and loathed; everyone felt strongly about her.

Thatcher’s London was a rough place for those on the margins, however. Although she’d just been re-elected for a third term when I first arrived there, anger over unemployment and her decision to increase taxes while also cutting back the safety net had left many simmering with rage. I spent many days wandering Hackney and Brixton talking to people squatting in Council flats and wondering if I could live like that if I moved there.

Thatcher’s London wasn’t a great place for gay men and lesbians, either.

Coming to London as an out queer was not as easy as I had expected. I had thought the level of sophistication in that international city would mean acceptance, but I arrived just as Thatcher’s darkest, most homophobic hours were coming to the fore. At the Conservative Party conference in 1987 Thatcher said, “Children who need to be taught to respect traditional moral values are being taught that they have an inalienable right to be gay.”

It was the first volley in what would become a vicious nationwide fight that queers would lose. A children’s picture book, Jenny Lives with Eric and Martin, the first children’s book to address homosexuality, started the controversy. The book had been published in England in 1983, but in 1987 newspapers reported that a copy of the book was in the library of the Labor-controlled Inner London Education Authority, pitting Labor against Thatcher’s Tories.

This information ginned up anti-gay sentiment that was already simmering due to AIDS.

It prompted Thatcher’s comment and led to the passage of Section 28 of the Local Government Act of 1988 after a long and bitter fight.

Section 28 stated that a local authority “shall not intentionally promote homosexuality or publish material with the intention of promoting homosexuality” and “promote the teaching in any maintained school of the acceptability of homosexuality as a pretended family relationship.”

The little gay picture book is innocuous, of course. Yet as soon as that one copy hit the library, Thatcher suggested that it was being used to inculcate schoolchildren with homosexuality. Jenny Lives with Eric and Martin was the pivot in Thatcher’s homophobic administration. (Ironically, as a member of Parliament 20 years earlier, she had voted to decriminalize homosexuality–one of a very few Conservatives to do so. And at a time when it was highly controversial and iconoclastic to do so.)

Like her companion in conservative policy, Ronald Reagan, Thatcher was bad on AIDS when it most mattered. Although the numbers were lower than those of the U.S., the AIDS crisis had hit London hard. By the late 80s, AIDS was feared in the U.K. the way it was in the U.S. Discrimination and censure were on the rise.

And yet Thatcher’s London was dichotomous: Rabidly homophobic, even as queer culture seemed to be all around.

Gay writer Emlyn Williams died a month after I arrived. Stephen Frears had just directed a film of John Lahr’s book, Prick Up Your Ears, about playwright Joe Orton and his lover (and killer) Kenneth Halliwell. The intensely sexual screenplay had been written by gay playwright Alan Bennett. Peter Ackroyd had just published his novel Oscar Wilde and Chatterton would be published in quick–and queer–succession. Writer and filmmaker Derek Jarman was about to premiere Last of England, a brutal critique of the Thatcher government with England as a ruined nation.

A year earlier Jarman had been diagnosed with AIDS and was among the first to speak out about the disease publicly and write about it. Jarman was a founder of the New Queer Cinema in England and a long-time critic of Thatcher’s who after Thatcher was ousted, wrote “On December 22, 1986, finding I was body positive, I set myself a target: I would disclose my secret and survive Margaret Thatcher. I have.”

Sir Ian McKellen was also spurred into action by Thatcher’s homophobic turn, forming a group of gay writers, actors and artists called “Section 28/The Arts Lobby.” McKellen wrote that he saw Section 28 as an attack on art as well as homosexuals.

In McKellen Activism, he writes, “We introduced ourselves to the press on Monday, 25 January 1988. Two days later, during a debate on Radio 3, I introduced myself to the public as a gay man.”

McKellen organized a gala to protest Section 28, enlisting gay and lesbian writers and culling from the works of queer writers like Tennessee Williams and Sappho. McKellen produced Before the Act, with many of the top names in British theater and film, among them Judi Dench, Alan Bates, Rupert Everett, James Wilby, Patrick Stewart and Vanessa Redgrave.

These events and the openly gay male voices of art and AIDS only served to antagonize Thatcher who had come to see queers as dangerous–to her nation’s health as well as its children. In 1985, Kenneth Clarke, Thatcher’s Minister of Health, enacted powers to detain people with AIDS in hospitals against their will in a pseudo-quarantine. AIDS activists and health professionals said it would force HIV+ people into hiding.

It was a dark time for queers, the years of Thatcher’s reign. Section 28 remained in place until 2000 in Scotland and 2003 in England. Peter Tatchell, author of “Safer Sexy” and other HIV-related books, was a frequent critic of Thatcher’s for her stances on AIDS and gays. He said, “During her rule, arrests and convictions for consenting same-sex behavior rocketed, as did queer-bashing violence and murder. Gay men were widely demonised and scapegoated for the AIDS pandemic and Thatcher did nothing to challenge this vilification.”

All that said, however, Thatcher’s actions and comments about lesbians and gay men galvanized activists who had otherwise just shrugged off the homophobia from the government. Section 28 was the most repressive anti-gay measure in over 100 years. And Thatcher promoted it.

I still have my pink and black NO ON 28 button that I used to wear. And as I recall that time in London, with the Iron Lady so forcefully present in British life, that is one of the things I remember best: That a woman so smart and calculating and visionary on so many levels could be so diminished by bigotry. The years under which gay men and lesbians chafed against Section 28 had to have quelled so much writing, for fear of reprisal, and bolstered so much homophobia, fueling hate crimes.

So as Thatcher is remembered with revisionist fondness by those who did and didn’t know her, I remember the dichotomy of Thatcher’s 80s London and Thatcher herself. Not as the guilty pleasure of Damian Barr’s memoir, but as the woman who I couldn’t quite admire, much as my feminist self wanted to, because my lesbian self was held hostage to her bigotry. It is that, in the end, that will keep her from being the iconic figure she was born to be.