‘Not My Bag’ by Sina Grace

‘Not My Bag’ by Sina Grace 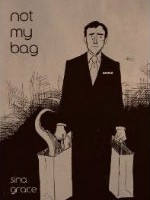 Retail is a service industry, one that promotes the work ethic “the customer is always right.”  Bending over backwards to please customers might increase sales, but it takes its toll on retail staff, who must remain ever-solicitous, even to customers who are wrong, criminally insane, or blatantly ripping off the store.  Add to that the fashion industry, a business easily taken in by appearances and fueled by vanity. Top it off with long hours (including nights and weekends), lousy pay (plus commission, another form of lousy pay), and a big dollop of competition, and you have all the makings of a job from hell.

If you relished The Devil Wears Prada, you’ll love Sina Grace’s foray into retail Hades. He falls into the job innocently enough. He applies for a job in a department store when a car accident puts him in debt. He thinks the job might be fun, but plans to work only until his debt is paid off. There are trainings, an older co-worker who shows him the ropes, and both benevolent coworkers and those labeled sharks— because they’ll stoop to anything to make a sale, complimenting customers with lies, and backstabbing coworkers if that’s what it takes to make a sale. Grace gets put on the Eileen Fisher line, a brand that “emphasizes the luxury of you,” but whose “design simplicity and generous sizing gave the brand a stigma of being for old ladies and chubby ladies.”

Unwittingly, Grace gets sucked in by the demands of the job.  The evil of the industry is two-fold.  The more he learns about fashion, the more he wants to be fashionable himself. Soon, more and more of his pay checks go to buy impractical designer-wear he can barely afford.  And the longer he works at the store, the more he buys into the industry’s values, values he scoffed at when he first arrived.

Frankie, who rivals Meryl Streep’s film character as “devil boss,” seemingly takes Grace under her wing, promising him a promotion to the Lafayette line. Grace brilliantly draws her with no face at all, or with a hideous face, both evidence of how she masks her true intent. She reels him in, treating him like a confidante, at the same time stringing him along, as what he does is never quite enough.

Grace’s job travails are paralleled by flashbacks to struggles with former lovers, his need to prove himself as an artist and his uncertainties about his current relationship.  When the whole construct comes crashing down, it comes as a relief, rescuing Grace’s relationship, his sense of morality, and his creativity.  Leaving the smothering environment of the store frees him, not only to create art, but to live more ethically, and to leave the backstabbing, lying and competition behind.

Grace’s art is elegant, comic and informative. He admittedly admires Craig Thompson’s drawing style, and readers will see a resemblance in both artists’ use of line and bold black ink. Grace’s failure as a fashionista might have emptied his closet, but it’s a huge benefit to those who read comics, as this deft tour through fashion retail attests.

'Rebels' by Jeff Mann
'You Know Me Well' by Nina LaCour and David Levithan
'Pagan Light: Dreams of Freedom and Beauty in Capri' by Jamie James