‘The Retribution’ and ‘The Vanishing Point’ by Val McDermid

‘The Retribution’ and ‘The Vanishing Point’ by Val McDermid

I started my life of crime when I was nine. I was home sick from school—in bed for several days—and my mother brought me a little stack of books that were once hers. Poe, Conan Doyle and the inimitable Nancy Drew. Scenes from The Tell-Tale Heart, A Study in Scarlet and The Password of Larkspur Lane all resonate, still.Once I fell in love, I never fell out of love. When people—starting with my erudite mother who had first introduced me to the very books that I so adore—told me that such “genre” books weren’t intellectual enough, I reminded them (well, perhaps not my mother, but I did devise the argument with my mother in mind) that Dostoevsky and Dickens were crime writers, too. And do we not use Chekhov’s gun as a reference point for foreshadowing? We do.

Some of our finest writers are authors of crime fiction. Russell Banks, James Ellroy, Patricia Highsmith, P.D. James and of course, Val McDermid. These writers don’t just tell a detective tale, they peel back the layers of human experience to reveal all the gory bits we try never to see up close.

I can’t recall ever reading a novel by McDermid that hasn’t gripped me from the outset. McDermid knows crime, but more importantly, she knows the dark side of men and women and the havoc they can wreak on each others’ lives. A recipient of the Lambda Pioneer Award and numerous other crime writing awards, with close to 30 novels to her name she’s been churning out at least a book a year for, well, quite a while.

Her two latest–released in the U.S. back-to-back—are very different. The Retribution is the latest in her popular series involving Tony Hill and Carol Jordan. The Vanishing Point is a stand-alone and does it ever.

In The Retribution, fans of McDermid’s series will recognize a previous villain, Jacko Vance, from her novel Wire in the Blood. Like the current scandal involving a TV host at the BBC, Vance was a TV presenter with a predilection for young girls. Except unlike the current tale, Vance was also a serial killer who had taken out one of Tony Hill’s colleagues. As well as 17 teenage girls. And had been caught and imprisoned.

But men as crazy and vicious—and brilliant—as Vance can’t always be kept behind bars. In The Retribution, Vance has escaped—with vengeance in mind. Now that he’s on the lam, Hill and Jordan and their team are top on his list of people he wants to visit. Hannibal Lecter-style.

One mystery writer wrote recently on an LGBT writer’s blog that women mystery writers are always relegated to writing cozies. I don’t think that’s true at all, but even if I did, it’s certainly not the case with McDermid, who does grisly and gruesome like few other writers. When McDermid gives us a serial killer, it’s someone who really loves killing—heads get split open, brains get splattered, skin gets flayed, entrails get tossed about, blood is, well, everywhere.

Like all novelists of her caliber, McDermid always has a second plot running parallel to the main plot. (It’s never a sub-plot with McDermid, because she never gives her second storyline short shrift nor forgets about it entirely, like some writers do. There is no “filler” in her novels.) In The Retribution, that is a second serial killer. (I know, right?)

Be still my pounding heart.

While Vance–who has plotted not just his escape, but his new future–is contemplating just what he’s going to do to Hill and Jordan, Jordan is wrapping one case in Bradfield and getting ready to move on to Worcester. But before she can leave, there’s one more serial killer who needs to be dispatched. Someone is killing and marking prostitutes and Jordan needs to solve the case before she can move on. But that adds a dimension of complexity that presents serious problems for the detective.

Jacko Vance is definitely the sine qua non of serial killers, but McDermid’s other serial killer is pretty intense in this compelling thriller. (And a warning for even those used to the level of violence in McDermid’s work: some of the scenes in this novel will stay with you a long while. The killing–and not just of humans—is extremely vivid. Not for the even remotely squeamish.)

And not for the emotionally squeamish either, because McDermid does more than tear flesh asunder in The Retribution—and what she does may distress fans of the dynamic crime duo. Vance is insidious and so is what is happening to Jordan as she shifts from one team to another. Fortunately, she has Hill—but therein lies a plot within a plot as this case, or rather these cases evolve. Can Jordan depend on Hill or not?

For those unfamiliar with the series (and you can jump in any time—McDermid gives just enough recap from past series books to allow new readers to join in), Tony and Carol are partners in crime, but not in romance. However they are something more than friends—chosen family, deeply connected, simpatico. There’s a bond there that they both need, loners that they each are in different ways. But something happens as these cases unfold that puts that relationship in jeopardy. And that is as important an issue in the plot as both killers are in terms of resolution.

Where will the series go from here? Only McDermid knows.

Perhaps the author wants a change.

As good as The Retribution is, in some respects The Vanishing Point, a stand-alone thriller, is even better. I have a deep fondness for Carol Jordan, but like many crime fiction fans, I am always open to something new and different from a writer who delivers the way McDermid does. When I was regularly reviewing novels by mystery/crime writer Laura Lippman for the Baltimore Sun, I loved her Tess Monaghan series, but her stand-alones? Wow.

The stand-alone crime novel allows the writer of series fiction to step outside the confines of developing and revealing more and more about those characters readers have come to depend on and to explore issues that series detectives may not be able to address. That’s what McDermid does in The Vanishing Point. 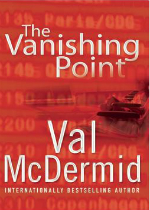 Tony Hill and Carol Jordan are both unmarried and more importantly, childless. But Stephanie Harker, the lead character in The Vanishing Point is not. She’s the parent of a five-year-old boy. Anyone responsible for a small child knows that being in a crowd or a busy place is always a challenge, which is why one sees so many parents with their children on literal leashes in parks and train stations.

So imagine Ms. Harker with five-year-old Jimmy in the fourth busiest airport in the world—Chicago’s O’Hare—with its moving walkways, thousands of people and intense security. That security is set in the wrong direction when Harker sets off the metal detectors and is pulled aside. As she gets detained, she watches, helpless, as Jimmy is led away by a man who is definitely not security. Harker goes justifiably berserk trying to get to her child. But in these days of terrorism and just plain lunatics, TSA officials make the split-second decision that she’s a threat and she gets tasered unmercifully.

This opening is shocking, edge-of-your-seat unnerving and violent on different levels. The reader is immediately drawn in by Harker’s overwhelming panic and fear. It’s taut, smart, vivid writing.

Eventually—but after much delay, of course—airport security realizes what has happened and an Amber Alert goes out for Jimmy. But is it already too late?

The third key figure in the novel is Scarlett Higgins, a reality TV star who is a cross between Kim Kardashian and Jessica Simpson. Harker has been tapped to write the “autobiography” of the popular star who has plotted her way into the limelight with well-planned moves that include a celebrity marriage and a pregnancy geared to garner big press and even bigger bucks from tabloids eager for first pix. Harker didn’t want the gig, but as she spends more time with Higgins, she becomes enmeshed in that celebrity world—far more than she expected.

In a revealing non-linear narrative, the reader begins to know who Harker and Jimmy are and how they came to be in Chicago, so far from the UK, as Harker tells her tale with the vivid clarity of a writer/reporter to an FBI agent as they wait for news of Jimmy.

And as Harker’s story unfolds, we see that all is not what it seems.

McDermid takes on a range of issues in this thriller that include our crazy lust for celebrity news, out-of-control tabloid journalism of the Rupert Murdoch, no-holds-barred brand, what it takes to be a parent and what it takes to be a successful woman in what is still very much a man’s world.

Both Higgins and Harker are intriguing, well-crafted characters, though neither are McDermid’s most likable creations, fully realized as they are. Each woman is distinct and complex and presents two sides to an Everywoman portrait of what is expected of women in 21st century society and what women end up with instead.

McDermid continues to provide compelling, page-turning, spine-tingling (both these novels have scenes that will, as my grandmother used to say, “curl your hair”), vividly realistic and suspenseful tales of what happens when people are left to their own devices and desires. And who it is who must clean up the mess. Challenging as well as entertaining, both these novels will resonate long after that last page is turned. Two more excellent reads from one of our best writers.

‘Dear John, I Love Jane’ by Candace Walsh and Laura André
'But This Is Different' by Mary Walker Baron
'Imperial Bedrooms' by Brett Easton Ellis