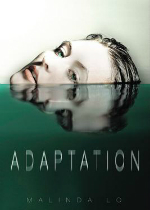 If you had nightmares as a child, or still do as an adult, after watching Alfred Hitchcock’s The Birds, then I recommend that you never pick up this novel. Because this fast-paced young adult story begins with birds hurling themselves into airplanes that then drop out of the sky, both the birds and the planes. Other birds fall mysteriously dead to the ground or ram themselves into the car of our main characters—a fowl collision that is so violent the car careens off the road, landing the injured Reese and David in a sterile clinic, come prison. Worse, they learn that their own government has incarcerated them and holds a secret that federal agents will kill to keep hidden.

Thus begins Malinda Lo’s science fiction thriller, with a steady and exciting pace that sustains itself throughout the novel. More than frightening birds parallel this read to a Hitchcock movie. It has the same kinds of twists and turns that he employed so effectively to move audiences to the edge of their seats, and layers upon layers of intrigue that keep you guessing until the very end. I was particularly impressed that Lo imbued the novel with such complexity yet made it easily understandable because of the young adult format. Add a dash of well-placed humor throughout, and Lo provides a great read.

Lo tells this story through the eyes of Reese, a capable narrator with her teenage angst, well-founded suspicion of adults, and a sharp mind that keeps her and those around her safe. I found it refreshing to read a young adult tale with a female hero who never relied on the men around her or romance to save the day. To be sure, there is teen infatuation here – more on that later – but not so intense that it drives Reese’s actions or defines her life. Reese is no pining damsel in distress, as she takes action to discover why the government kidnapped her, what the authorities have hidden from the public, and what it ultimately means for her when she learns that while in the clinic they performed medical experiments. If anything, Reese leads her gay best friend, Julian, and her debate partner, David, in their quest for knowledge. Throw out those love-sick vampires and instead give this to your teenagers for a better lesson about gender.

Now, more about that romance I mentioned and the fluid sexuality in Adaptation. Another refreshing aspect of the novel comes in the form of Reese as she tries to figure out her own sexuality. She has a crush on David that befuddles her on many occasions. Then the picture gets more complicated with the arrival of Amber, who seduces Reese in a way she had never before experienced—though that leads to more twists and turns as Amber has secrets of her own. I refuse to tell you more because it risks key elements of the plot. Suffice it to say that, as with Reese’s self-confidence, a bisexual protagonist is a welcome addition to young adult literature.

I only had one complaint after reading the novel, but I suspect Lo will rectify this shortly. After building the tension and suspense throughout, Lo ends on a somewhat confusing and unfulfilling note. I had to read the ending twice to come to terms with it. And the only thing that makes sense of the problem is that a sequel is already planned and in the works. I hope so, because I can’t wait to read it.

I just glanced out my window, and some birds are frolicking in the unseasonably warm Chicago weather this late November. I’m grateful to see them flying about, not smashing into airplanes and cars. Lo does for young adult science fiction what Hitchcock did for movies in his day. Bravo!

Melissa Febos: On Writing with Curiosity and Empathy
'Acts of Gaiety: LGBT Performance and the Politics of Pleasure' by Sara Warner
'Time After Time' by JP Bowie & 'The Rest of Our Lives' by Dan Stone