‘The Dream of Doctor Bantam’ by Jeanne Thornton

‘The Dream of Doctor Bantam’ by Jeanne Thornton 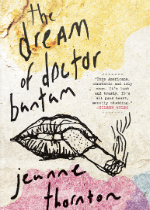 Meet Julie Thatch, the teenage protagonist of Jeanne Thornton’s debut novel, The Dream of Doctor Bantam. Julie is seventeen, an angst-filled teenager coping with the untimely death of her beloved older sister while uncovering the wild world of sexuality and love.

The Dream of Doctor Bantam opens with a flashback, Julie and her sister Tabitha out late one night at IHOP, and then moves forward to the novel’s present time, which begins the day after Tabitha is killed while running headlong (and naked) into an oncoming car. The novel follows Julie’s coming-of-age in the year after Tabitha’s death—without giving everything away, Julie experiments and uncovers her sexuality, falls in love with a girl named Patrice, starts smoking, drops out of high school, gets her first job, and more—but don’t expect a pat, generic ending. In fact, don’t expect anything pat or generic at all out of this book. It’s full of strange plot twists and struggles, it teeters on the edge between dream and reality, it’s gut-wrenching and will make you wince and roll your eyes and wonder if your own coming-of-age was quite so fraught (and you’ll realize it was). It’s funny and sad without trying too hard, and more than anything else, it’s honest.

Julie’s paramour, Patrice, is a committed member of the Institute of Temporal Illusions, and this cult-like “religion” creates most of the tension and conflict in The Dream of Doctor Bantam. Doctor Bantam, by the way, is the founder of the Institute of Temporal Illusions, and while he never makes an appearance in the novel, his presence is always lurking. The Institute rejects the concept of time; in several scenes, Patrice can be found chanting, “Four o’clock is after ten o’clock… Noon is before midnight. Eleven o’clock is also five o’clock,” or something similar. (Actually, it seems that the Institute’s primary method of obtaining followers is by severely disorienting them.) Julie and Patrice, despite their constant bickering, forge a crazy, intense bond. It is in these moments of desire that Thornton is at her finest, capturing the wondrous, torturous moments of first love: “And the lock in her heart felt like it was coming open again, the gears and tumblers falling piece by piece until there was nothing but a pile of metal, glittering, on the grass.”

Set in Austin, The Dream of Doctor Bantam does a fine job of evoking the underside of a city—the parts only a local might see. It’s a gritty city that Julie perceives, where the coffee is always bitter (she won’t put milk in her coffee if the person she’s drinking with doesn’t, even though she prefers it) and her dead sister resurfaces at the strangest moments. Julie’s connection to Tabitha is explored as a side-plot, sometimes very focal and other times completely missing, and this seems the perfect way to portray it.

There is an unending amount of life in this book, the pages fairly surge with it. Julie is fumbling, weird, snarky, and also wise in her ironic, insecure yet self-assured way. Julie’s urges and interactions with her world are palpable—Thornton’s prose skillfully matches and magnifies Julie’s take on things, making the entire book an immersive, in-your-face experience.

There is a zine-like aesthetic to The Dream of Doctor Bantam, and while it works overall, there are a few parts of the books that feel messier than others—it has its share of inconsistencies and imperfections. None of these things are large enough to ruin the overall enjoyment of the book, but if you’re the type of reader who likes tidy prose and scenes, this isn’t the book for you. If you are, however, the type of reader who likes to dive into the weird world of the protagonist and hang on for dear life as she navigates it, then The Dream of Doctor Bantam is a just the ticket.