‘Far from the Tree’ by Andrew Solomon

‘Far from the Tree’ by Andrew Solomon 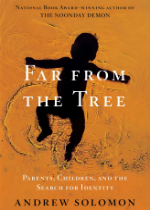 In ancient Greece, parents who considered their newborn babies unfit would abandon them on a mountaintop. For centuries, the Western world did not do much better when parents institutionalized their differently abled children. Today, thanks to certain types of genetic testing, parents can choose whether or not they want to have a child with physical or developmental disabilities. At the same time, twenty-first century amniocentesis does not detect sexual orientation, learning disabilities, deafness, blindness, autism, transgenderism, or the probability of schizophrenia. Parents who have children with these differences often struggle to understand, accept, and love them.

In Far From the Tree: Parents, Children, and the Search For Identity (Scribner), psychologist Andrew Solomon poses a fundamental question: How do you nurture a child who is nothing like you? Solomon begins to answer this question with a reflection on his own life, in the first chapter called “Son.” Solomon recounts the story of growing up dyslexic and gay. While he credits his mother for never giving up on him through his academic struggles, always believing in his intelligence and supporting his creative spirit, Solomon’s mother sharply rejected him for his homosexuality. This deeply scarred Solomon, and caused him to do everything he could to “change.” Eventually Solomon realized that being gay was as much a part of him as being dyslexic, and he discovered that gay people had a culture and strength of their own, which he eventually embraced. He began to wonder why his mother could accept him as a dyslexic, but not as a homosexual.

Everyone, according to Solomon, has two conflicting identities. Our “vertical” identity—race, ethnicity, or culture, for example—organically flows through generations and connects us to our parents. Our “horizontal” identity, however—deafness or gayness, to name just two examples–is any combination of characteristics that not only make us different from our parents, but create a rift between the child’s existence and the parents’ experiences. Horizontal identities often challenge our definition of family and interrupt its expected vertical flow. Parents often reject their children due to their failure to understand and accept these horizontal identities, thus severing familial bonds.

Solomon wondered if he would have the capability to accept and love a child, no matter what. This question sent Solomon on a mission to find out more about families coping with autism, deafness, dwarfism, Down Syndrome, genius, schizophrenia, and transgender identities. He also investigated families with children conceived in rape, and children who became criminals. After gathering forty thousand pages of interview transcripts from more than three hundred families, Solomon came to the conclusion that parents struggle with defining compassion and compassionate choices for their children. This is especially so for hearing parents of deaf children, who often want to “fix” them with cochlear implant surgery and speech therapies, even though neither are 100% effective in eliminating hearing impairments or improving communication for the deaf. Some parents of dwarves attempt to give their children “normal” height through painful “bone lengthening” surgeries and hormone injections that yield small returns. Some parents make choices for their children in isolation, while others actively search for families with children experiencing similar issues to create a community support system.

At 960 pages, Far from the Tree is a heavy tome to swallow—the reader may choose to read one or more chapters of interest and feel quite satisfied. The reader who simply dives in, however, will feel compelled to continue. Solomon treats his subjects with great empathy, and successfully humanizes most types of disabled children for us. (Unfortunately, he struggles with portraying schizophrenics with the same loving brush.)

We ask these same questions that Solomon has asked of himself—would I be able to love a child who is different from myself? After reading this book, one would be more inclined to try. It may also give us an opportunity to help us understand and forgive our parents for rejecting us. Our difference, and how we have overcome the challenges and rejections related to it, sometimes defines us more strongly than our vertical identities. For our horizontal identities, we also have our parents to thank.