‘A Waste of Time’ by Rick Worley

‘A Waste of Time’ by Rick Worley

OK, so Christmas and Chanukah have come and gone. But there’s always New Year’s, and for all your friends who break their New Year’s resolutions not to drink and slut around the minute the clock hand slides to twelve-oh-one, give them this book when the hangover hits. Rick Worley’s comics are the perfect hair of the dog for the month of January.

Now, I’m not a fan of funny animal comics for grownups. Huey, Dewey and Louie are fine for rugrats, but if you’re old enough to balance a martini glass, it’s time to evolve to two legs instead of four. With an attitude like this, I welcomed StevieD and EvilJeff’s foreword which explained to me, “Rick Worley has geniously realized that he can show gays at their worst if they look like cute bunnies, robots and teddy bears. …he’s one of the few faggots out there telling the truth. He doesn’t hold back.”

Caravaggio and Michelangelo as horndogs feeling sorry for themselves? What a great theory!  If you feel like “an outcast among gay outcasts,” and cringe at how gay marriage, gay parenting and gay suburbanization denies queerness of its debauchery, Worley’s cartoons are for you.

The bunny (I guess he’s a bunny – every time I look at his head, it’s so butt-shaped I can’t help but think of the punch line for that old joke…Gotta match? Yeah your face and my ass!) is Worley’s stand-in, an artist obsessed with twinks who are younger, dumber and prettier than him. The bunny uses his drawing skills as a pick-up trick, meeting young guys, inviting them home to pose, art modeling digressing to sex. It’s odd seeing realistic-looking guys conversing with cartoon animals, even more unnerving seeing them inter-porking. It’s not sexy, but it’s hella funny.

What aresexy are the full-size drawings Worley drops into his comic, allowing us peruse the bunny’s drawing pad, interrupting the cartoon with the art of the unfulfilled pornhound. And guess what? That art is beautiful. Revelation. 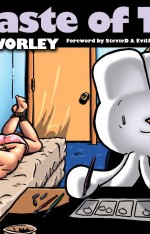 A Waste Of Time

One astute comic pretty much sums this book up. It shows the bunny chatting with his twink friend, explaining the sculpture of Michelangelo’s called “Victory,” depicting an older man pinned under a younger man’s knee.

“The thing is, almost purely by his youth and beauty, the young man has complete power over the other man, whether the other man resists or not,” explains the bunny. Later he concludes, “…I don’t think artists write about what they’re compelled to do by their love or lust except in the context of their helplessness in the face of their desires, or their own victimization.” The twink replies, “And do you have life experiences that compel you to write like that?”