Book Lovers: The 12 Nights of Christmas

Book Lovers: The 12 Nights of Christmas

“And visions of sugar plums danced in their heads.”

I follow the old tradition and believe that Christmas should be properly celebrated from Christmas Eve on December 24 through the Epiphany on January 6—the 12 days of Christmas. This also means that I get to cash in on all the after Christmas inventory clearance sales in my gift buying.  So if you’re reading this column a tad late to influence your gift-giving, take heart and take charge card, because there just might be something here that’s not too late to stuff into your romance-loving boyfriend’s stocking. 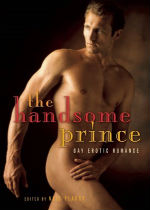 Romance stories warm up long winter nights like hot chocolate with marshmallows.  Neil Plakcy has edited a charming collection of them in The Handsome Prince, from Cleis Press, 2011 .  These Nutcracker princes come in a variety of enchanted shapes in stories that re-imagine classic fairy tales.  Get more Plakcy in his marvelous new romance, The Russian Boy (2011, in Kindle Edition at www.amazon.com).  Plakcy recaptures the romantic intrigue of Hitchcock’s classic, To Catch a Thief, in this tale of love and art theft set in Nice, with a mature romantic hero reminiscent of the luscious (and bisexual) Cary Grant.

Tchaikovsky’s candy cane princes, Spanish chocolate, Arabian coffee and a Sugar Plum Cavalier, make Christmas a sumptuous gay fantasy, which is why I love to read romance fantasy and adventure at Christmas.   Geoffrey Knight’s The Curse of the Dragon God: A Gay Adventure, (Cleis Press, 2011) sends his Fathom’s Five team of muscular gay Indiana Joneses on a journey to as many exotic locales as the Nutcracker Prince himself in pursuit of an elusive cursed diamond.  A modern day adventure set in North Africa prior to the Six-Day Arab-Israeli War in 1967, Elliott Mackle’s Captain Harding’s Six-Day War, (Lethe Press, 2011) has more realpolitik and less fantasy, but it is every bit as much erotically charged with a powerful story to match. 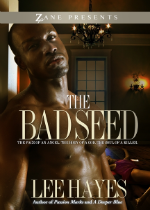 If you’re stuck in a Connecticut snowstorm without electricity and no boyfriend to keep youwarm, try these two hot thriller collections to get your blood and other things spurting.  The Bad Seed by Lee Hayes (Zane Presents by Strebor Books, 2011) combines murder, sex, and love in two chilling novellas that will heat you up quick ( Look for a full review in the January “Book Lovers”).  Heartrace, the latest romance horror collection by Rick R. Reed is just out from Amber Quill Press, 2011 with four horror romances that are so good I bought it for myself for my birthday—my bf doesn’t “get” romance novels.  The sexy cover by Trace Edward Zaber  is slightly unsettling, perfectly illustrating the stories within.

One of my favorite things about romance (besides boys in white jockstraps with blue satin sashes) is the genre within the genre of holiday romance.  Every holiday sees a huge list of new titles with pretty covers and intriguing plot devices, as delightful as a big box of Christmas chocolates.  It is hard to eat just one and I must somewhat arbitrarily pull out a few to share with you.  The always dependable Astrid Amara’s  Carol of the Bellskis from Loose ID is an amusing Hanukkah romance. 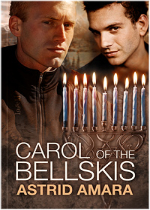 Also from Loose ID is Let It Snow!  from Michael Barnette about an icy Anglo ranger and a hot Latino photographer snow-bound together in Rocky Mountain National Park.  Go to www.loose-id.com for the full list of their Jingle Bell Rock collection.  Torquere Books offers a slightly kinkier take on the holidays with their  Holiday Sips series, each title tellingly beginning with the word, “Naughty.”  Nothing “nice” about these boys. 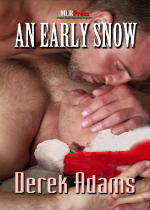 But keep in mind MLR Press’ other interesting shorts series, such as The Got 5 (or 10 or 20) Minutes? series, William Maltese’s Boys’ Reformatory series, and the new Slaves to Love series by J. P. Bowie.

Dreamspinner’s Press  is publishing their delightful annual Advent calendar of holiday romances.  The Advent calendar is a full package of 31 stories with one story a day automatically placed on your electronic bookshelf by Santa himself.  Dreamspinner’s says that “the full set is around 1,800 pages of romantic M/M fiction” and the earlier you buy, the bigger your bargain. The charming calendar cover is done by Paul Richmond (www.paulrichmondstudio.com).  What is so amazing about this collection is that the winter holidays serve as the springboard for these talented authors to explore the full gamut of romance fiction, from the purely erotic to historical romance, fantasy, mystery, contemporary, and ethnic romance.  You’ll never have cabin fever in these writers’ hands. 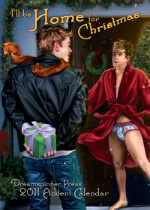 Meanwhile, as the dread Las Vegas winter descends, I’ll be reporting from poolside in the January “Book Lovers” column on “The White Devil,” the best-selling ghost story/romance by Justin Evans (Harper/Collins, 2011, ).