“I turn everything into activism.”

First, let’s talk about you. You’re incredibly busy. In addition to writing for various publications, you’re also a mystery editor for us, you maintain a cat sanctuary in Philadelphia, and now you’ve launched your own imprint! How do you juggle all of those roles?

I write two columns for newspapers in Philadelphia, a column for two political blogs, I do several TV columns, including one on queers and politics for the San Francisco Bay Area Reporter, which has to be the best independent queer newspaper in the country and I do monthly columns and features for Curve, where I have been a contributing editor for 20 years.

I mention these things because it’s important for writers to have their work constantly in print and not just online. We need to stay in all forms of print media. I also write books, publish a lot of short stories and essays in a variety of anthologies and academic journals. And I teach. I’m just driven to do it. I don’t know what to do if I am not working.

In addition to all the literary involvement, you’re also dealing with some serious health issues—some of which you explore in an anthology you edited, Coming Out of Cancer (Seal). How are you feeling these days?

LOL–I feel like crap, but thanks for asking. I have a damaged heart, a spot on my left lung despite never having smoked, and one fake breast and have had 19 surgeries in 25 years. But what are you going to do? You have two choices: pull the covers over your head and give up or keep going. My grandmother, a suffragist who at 19 was marching for the vote for women and who lived to be 96 used to say “It’s a great life if you don’t weaken.” This is my mantra.

I have primary progressive MS and was diagnosed at 33 at the height of my career as an investigative journalist. I have been in and out of a wheelchair since 1994 and for the past year and a half I have had to be on oxygen due to the damaged lungs. It’s complicated, it’s not pretty, it’s hideously expensive and it’s a daily struggle, but part of my writer’s voice is to be the voice for women and lesbians who are either disabled or who are dealing with cancer.

One in six Americans is dealing with a disability. One in three women will have cancer–lung cancer leading the pack, so to speak. How could I possibly ignore those things? I turn everything into activism. It makes it easier to cope, I find.

Let’s talk about the new imprint. What was the inspiration behind Tiny Satchel?

I’d been acquiring and editing young adult books for five or six years for a mainstream publisher. I was enjoying doing it, but I kept being aware that some books I pitched would get the “we don’t think there’s a readership or audience for that.” And consistently it seemed to me to be books with characters of color or queer. It started to irk me. My own fiction always has a political undercurrent I just don’t think anyone can be too young to have a range of characters with whom to identify. I wanted more range. So I wanted to provide books that I would want to read if I were nine or 12 or 15.

One of the biggest complaints I hear from young readers and parents is that there are few middle-grade books coming out with LGBT themes, why do you think that is?

Greg Herren is an established mystery writer, not to mention a multiple Lambda Literary Award winner, how did this new Young Adult novel, Sorceress, come about?

Greg and I go back about 13 years, since he was the editor at Lambda Book Report. We have been very good friends since.

Greg is incredibly prolific. He publishes about 5 books a year. I am in awe of his productivity. When I decided to do Tiny Satchel, I asked him, “So, how about doing a young adult book for me?” The worst thing he could do was say No. Turned out he’d wanted to do a YA book for years.

Sorceress is a whole new genre for him. I’m thrilled to have the book. We are working on another project together as well, this time for boys.

LGBT Young Adult books are incredibly hot right now. I can name dozens of award winning authors who are pushing the envelope with out characters. This is a huge leap from when I was a teen and pre-teen. What do you hope to accomplish with Tiny Satchel?

I hope to make the lives of kids like I was easier. I hope to give more kids more characters too identify with. I hope to help the bullying and the closeting and the having to lie about who you are stop.

I was a voracious reader as a child and I have to say, books saved my life. But there were very few characters I could identify with. I want every kid to have at least one character they can point to and say–Hey, that’s me!

I’m excited about From Where We Sit a collection of stories featuring Jewelle Gomez, Craig Gidney and Fiona Lewis, among others. What can you tell me about that collection?

A close friend of mine—a straight black writer—is always complaining about how books for African Americans are always either hand-wringing or about “the Street.” She wants to see more books about the range of black life in America. When I was looking at books for black teens and tweens, they were either black versions of the Mean Girls books or they were proselytizingly Christian. And that’s all fine. But it’s not enough. 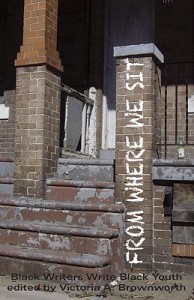 What I wanted to do was try to have a story for every black kid. And also a collection that people who weren’t African American could not dismiss as “too urban” or “too ethnic” or whatever the racist euphemism is these days for keeping writing of color out of the mainstream literary canon. These are good stories, they are moving, poignant, funny, intense, meaningful, outrageous and just plain superb stories.

I had some trepidation about being a white editor doing a book by black writers, what was most important to me was to have this really diverse collection. I live in a 95 percent black, 85 percent poor neighborhood in Philadelphia and I wanted a book that my next-door neighbors’ three kids could read.

One of my close friends, Toni Brown—a terrific poet whose work I had published in a couple of my anthologies—died suddenly a few years ago. She was writing a young adult novel that I had commissioned at the time that will never be finished now. I hate that her voice is gone, because she was such a fierce feminist and lesbian.

I dedicated this book to her and to my now long-dead friend, Assotto Saint, another wonderful poet, who died of AIDS in 1994, but who wanted black voices heard. He told me repeatedly that he would not be silenced, that silence really was death.

What is your opinion about e-books?

I keep hearing about the death of print culture–I’ve been hearing about it for nearly two decades now. E-books are nice and cheap–for the publisher—but not for the reader and not for the writer. I just read an article last week about how writers are getting screwed by e-book royalties and publishers don’t care.

I think e-books are classist, as well. You can’t share e-books, you can’t remainder e-books, and you can’t buy e-books at a second-hand store. Your e-books can disappear out of your Kindle or Nook at the decision of a censoring Amazon or B&N.

Do you own an e-reader?

Will Tiny Satchel have e-book available as well?

Everything I said above notwithstanding, yes, because I want our books to be available to everyone—even people with money. ;-)

You’re publishing a novel by Diane Dekelb-Rittenhouse. Can you tell us a little about Immortal Longings?

Diane is a fabulous writer. She’s done extraordinary writing for me in the past—short stories, erotica. She was someone I had acquired a young adult novel from a few years ago and I thought–why not a lesbian Twilight? This book is really tremendous–it’s beautifully written and has an exciting plot with two incredibly believable and engaging young lesbian characters, who are also working class and one is bi-racial.

I’m psyched about it. It takes the Elizabeth Bathory story and updates it to present-day New York. It even has vampire cats. Teens are going to love this book.

Finally, let’s end with more about you. You, yourself, are a Lambda Literary Award recognized author and award-winning journalist and editor, are you finding time to write at all?

Not as much time as I would like, but that’s because Tiny Satchel is a real Mom and Mom operation. My wife is the art director, my ex-wife is the managing editor and typesetter, my best friend does the website, Facebook and computer crises and I do everything else from acquisitions to editing to marketing and none of us gets paid. 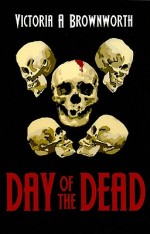 I just finished 2 essays for upcoming anthologies as well as 4 short stories for upcoming anthologies and I am working on a novel and have another in progress, a complicated historical novel about Frida Kahlo and Trotsky that is time-consuming because the history has to be accurate. I hate reading historical novels taken directly from Wikipedia. As an historian, it galls me.

I’m also doing another collection of short stories because I love short stories more than any other form. I was thrilled that Day of the Dead was an honorable mention from the ALA. It’s a really good book that hasn’t received enough attention, but then it’s very political and I find that trafficking of women and rape and honor killing are still not topics people want to hear about. Hopefully the ALA nod will jumpstart some attention.

Writing is still my first love but when you are seriously ill, you have to make hard choices. Right now getting Tiny Satchel moving forward is paramount. I want these books to succeed. Thanks for the opportunity to talk about our press and what we want to do.

Greg Herren: The Art of Doing It All
Kelly Cogswell: My Life as a Lesbian Avenger
Amber Dawn on Writing a Contemporary Ghost Story