‘The Nearest Exit May Be Behind You’ by S. Bear Bergman

‘The Nearest Exit May Be Behind You’ by S. Bear Bergman

S. Bear Bergman’s latest collection of essays, The Nearest Exit May Be Behind You (Arsenal Pulp Press), is not the sort of book to be read in one sitting. As the title indicates, the book documents, interrogates, meditates on the experience of gender that does not, unlike (hopefully) an airplane flight, smoothly transition a person from point A to point B, from woman to man, as it were.

Rather, Bergman opts for a gendered journey of hir own choosing, one that requires a parachute and a strong arm to unlock the emergency exit; of the right to self-determine gender, Bergman, with hir characteristic humor comments, “Nothing about gender, or orientation, is clear enough to police or defend without circling the wagons so tight that we’re all pissing in our front yards within six months” (20).

While many of the essays contained within this book present stories of Bergman’s gender-jamming life with immense tenderness and pleasure, others come off as defensive, watchful. Which is, in it of itself, a certain sort of tenderness; Bergman allows the public to share hir insecurities and uncertainties.

Ze writes of being visibly queer:

Sometimes this is lovely. Sometimes it means recognizing your tribe, or knowing where to turn for shelter from a storm. But it also breeds a certain watchfulness….I recognized that I nearly always know where the nearest exit is, metaphorical or actual, when I am interacting with new people (17).

In one story, “Dutiful Grandchild,” Bergman moves hir beloved grandparents into a retirement community, and yet the narrative turns on the fear of transphobia rearing its ugly head even in a time when Bergman is acting the ultimate mensch: “But I could not figure out why no one was being even slightly weird to me, or questioning even the smallest bit why this big, tenor dude was the granddaughter” (48).

Ze speaks against the use of the word “passing” by identifying its racist roots, instead urging readers to talk about “who reads, as in ‘They read me as a man’,” thus assigning the responsibility of gender identification to the observer, and not the transperson, as in the use of passing.

At the heart of this discomfiture is the gendered standard of being real. In “Velveteen Tranny,” Bergman details the way in which the genders ze’s performed never meet up to others’ expectations of what a girl/a butch/a man/a transguy should be, in addition to the added conflict of presenting a gender that reads as real and consistent with one’s self.

Transpeople lose a number of things when we transition. We can lose family, friends, jobs, children, lovers, and money. But the most difficult thing for me to lose has been veracity…So they can decide what they want to call me or how they want to refer to me or if I deserve the pronouns I have requested (and therefore asserted to deserve) (74).

Part of the work of these essays, then, is to give space to Bergman’s voice, a space where ze can articulate the terms of engagement, where what is multifaceted about hir becomes apparent and real. Bergman asserts that, unlike the velveteen rabbit, who only needed one to believe in hir realness, Bergman needs “cultural change” (75), and this book of essays works on the front of culture and education to effect that change, as it both educates and entertains. 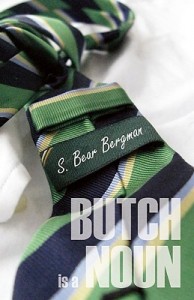 The strength of these essays often lies in Bergman’s fine capacity for storytelling. I laughed many times while reading “Like Love,” Bergman’s telling of hir ordeal in applying for Canadian citizenship as hir husband’s legal spouse, and “When Will You Be Having the Surgery?”, in which Bergman manipulates the vagueness of this often heard question to playful effects (“I would absolutely have the surgery to turn me into Mark-from-high-school, the blueprint of every boy I have ever been hot for” [52]).

I realized while reading hir tender, charming essay “Seahorse Papa” that Bergman’s husband, J Wallace, has written the other side of this story, of Wallace’s pregnancy, in Gender Outlaws: The Next Generation, which Bergman co-edited along with Kate Bornstein.

These essays are marked by the particular—Bergman does not claim to be speaking for all transpeople in all times. So I appreciate the sense of Jewishness infused in these essays, particularly “Wrap/t” and “Today, I Am a Man (And Other Perorations of the Tranny Jewboy)”, which define Bergman’s masculinity as a certain type of Jewish masculinity, different from standard North American masculinity; this constitutes one of the most a noticeable changes, along with no longer identifying as butch, from Butch is a Noun.

Ze discusses the gendered movement of wrapping a tallis, documents the influence of Jewish cultural approval of men showing emotion while being careful to avoid the trap of anti-Semitic stereotype, and claims hir heritage from the Jewish male storytellers before hir.

I should mention that a second edition of Butch is a Noun has been recently released. A new afterword explains that the content of the book has been left unchanged, with exception of typos and misused words. As ze writes in the afterword, “Many things have changed in my worldview, and more significantly in my life…I couldn’t imagine how to update without entirely rewriting” (219).

If you haven’t read this book yet, I highly recommend it; Bergman’s essays are witty, interesting, tough and tender. One of the best pieces, the hilarious “I Know What Butch Is,” lays out the difficulties and joys of trying to write a book to define butch experience, as both something that can only be particular to Bergman’s experience and yet is a cultural phenomenon, so extends further than hir. I love the dancing around definition:

Butches are outlaws. Also gentlemen. Gentlemen who open doors and pick up checks and say “after you” and hold your umbrella over you in the rain while the water drips down their sleeves. But butches are not gentlemen if being a gentleman means imposing on the unsuspecting their sexist modes of acting out the cultural paradigm of the helplessness of women. Except if the unsuspecting are crying and need a handkerchief, or elderly and need a seat to sit down in, then it’s all right. Probably. But butches should never wait for a femme to tell them specifically that it is all right to behave in a gentlemanly fashion, they should just go ahead and do it because femmes like a butch with confidence, unless it turns out that she finds it offensive and feels as though you have imposed your gender fetish on her, you arrogant bastard.

G. Stein-Bodenheimer is a Los Angeles-based freelance writer. She holds a BA in English Language and Literature from Smith College.