Howl, a movie about the iconic poem of the 50s Beat movement, offers nothing new to those familiar with Allen Ginsberg and the Beats. What it does instead is transmit a full-bodied poem into a movie. It’s not quite an adaptation but more of a close reading of a poem, annotated with biographical details and historical context in the form of movie scenes.

Written and directed by Rob Epstein and Jeffrey Friedman (The Celluloid Closet, The Times of Harvey Milk), Howl stars James Franco as the great American poet Allen Ginsberg. We get snatches of Ginsberg’s life in New York as he encounters Jack Kerouac (Todd  Rolondi), Neal Cassady (Jon Prescott), and his partner Peter Orlovsky (Aaron Tvelt), and how Dadaist writer Carl Solomon, whom Ginsberg meets in a mental asylum, sets off the decorum-smashing, movement-defining poem. 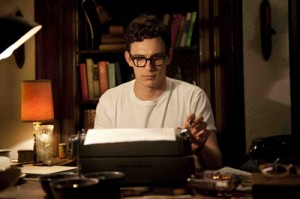 Taking off from scenes of Ginsberg reading to a rapt crowd is an often literalist animation by Eric Drooker and Russell Barnes. The dynamically crude animation, leaping and shooting across the screen, turns some of Howl’s lines into moving images that capture Ginsberg’s rhapsodic anguish. Howl also shows how a poet’s engineered lines come from unexpectedly commonplace sources. There’s a funny, wonderfully executed scene where Ginsberg stumbles upon the phrase “windows of the skull.”

The movie spends a good amount of time on the 1957 trial against Ginserg and Lawrence Ferlinghetti (who published Howl and other poems through his City Lights Bookstore). David Strathairn and Jon Hamm play lawyers from both sides, and Mary Louise Parker and Jeff Daniels appear as academics arguing for Howl as smut. Alessandro Nivola and Treat Williams come in as the poem’s reluctant defenders, Luther Nichols and Mark Schorer. Shot in a deliberately sober pace, the courtroom segments are like stately chunks of a typical Hollywood biopic lodged in between black-and-white happenings of young Allen Ginsberg and fellow Beatniks.

James Franco, who some viewers might find too good-looking to play Ginsberg, is sincere and dedicated enough not to spoil the role. It’s not exactly Sean Penn disappearing under Harvey Milk’s skin. Just James Franco, current hot commodity in Hollywood, posing as Allen Ginsberg, and for Howl, it’s more than enough. This is a movie that’s rowdy, passionate, even sexy—it’s poetry dammit—and Franco has all that in spades. Franco may not look like Ginsberg but he moves and talks and even delivers a joke the way an Allen Ginsberg would have. Forget about the likeness. Not halfway into Howl, Franco’s love for the project glows through this performance; you’d believe this guy couldn’t be anybody else but Allen Ginsberg. 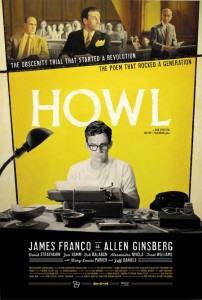 In one scene, Ginsberg talks about how uncomfortable he was sleeping next to the studly Neal Cassady, whom he’d been in love with, how he would curl up to the wall with his back turned to Cassady. James Franco is so good here you could almost see him trembling as he tries to suck desire into his ribcage. Of course, Cassady lets him unleash it. Franco’s Ginsberg, tentatively like a spider, unfolds himself, stretches his skinny limbs, and reaches out for this other warm, pulsating body. It’s a scene familiar to many of us who’ve once been scared of another person’s touch, and James Franco captures it so tenderly.

The biopic bits, recreated interviews, and scenes from the trial are thrown in almost haphazardly, but it all somehow coheres. How disappointing it would be to get a straight, earnest, dutifully organized biopic about Allen Ginsberg, let alone a prestige picture about a poem like Howl.

It’s also a small wonder, especially for Ginsberg’s readers, to see how contemporary Howl, the poem, feels in this movie. Epstein and Friedman manage to link events in Ginsberg’s life with images from Howl and hit a few recent hot button themes. The movie nudges us to rediscover the chapbook City Lights Bookstore printed more than fifty years ago. Epstein and Friedman’s Howl is a moving picture as a poem, the poem as a moving picture. It explodes on the page and burns on screen. It gets even better when it goes on in your head.

Howl is now available on DVD and Blue Ray at howlthemovie.com.

The Perfume Thief: A Story of Queer Bravery in Occupied Paris
'Transition: The Story of How I Became a Man' by Chaz Bono
'Intolerable: A Memoir of Extremes' by Kamal Al-Solaylee

John Bengan is a writer from the Philippines. He is currently finishing an MFA in Creative Writing at the New School.